Celtic 1-3 Copenhagen: Bhoys beaten as the Danes put three past the hosts to cancel out a Panenka penalty from Odsonne Edouard

For two fleeting minutes Big Brother seemed to come to Celtic’s rescue. By the end of a calamitous Europa League exit even a Video Assistant Referee couldn’t prevent Scotland’s champions taking a gun and firing three bullets into their own feet.

A goal down after a Jozo Simunovic error gifted the Danish champions a precious away goal after 51 minutes salvation beckoned with eleven minutes to play. For so long the team’s fulcrum, Odsonne Edouard picked a lousy night to play poorly. Yet, when the Frenchman’s cross was handled by Ragnar Sigurdsson in the penalty area he still dinked a cool, composed Panenka spot kick down the middle.

For 180 precious seconds anything seemed possible. Yet Celtic were never *really* at it here and the hope was fleeting in the end. 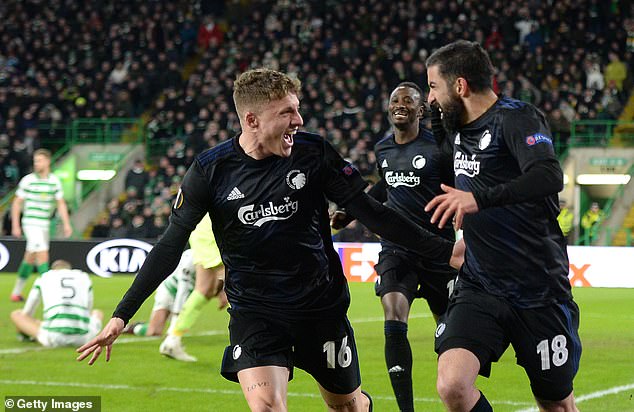 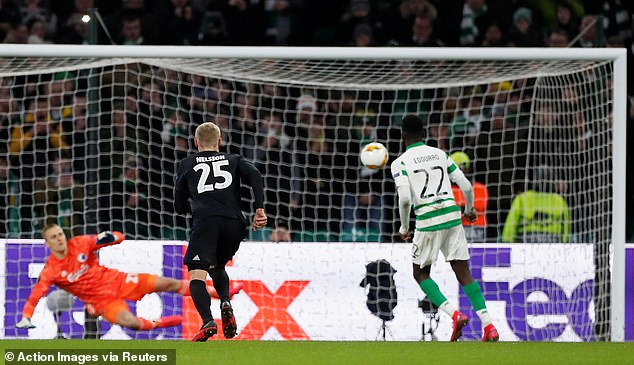 A piece of rare Tom Rogic miscontrol in the centre circle allowed Rasmus Falk to burst clear, Pep Biel enjoying acres of space to roll the balll through the legs of Fraser Forster. In the final minutes Dame N’Doye danced through a ragged Celtic defence with minutes to add a third and that was that.

On a night horribly reminiscent of the Champions League qualifying defeat to Cluj in August Scotland’s champions were out of Europe. Again. Rangers will now be Scotland’s sole representatives in the last 16 draw of the Europa League.

Celtic will look back and reflect on a key three minutes early in the second half. The first saw a perfectly good Callum McGregor Celtic goal chalked off. The second saw Copenhagen seal the away goal they needed with their first chance of the game. Had the home side taken the lead then who knows how it could have changed the game.

McGregor smashed a first time shot into the roof of the net from the edge of the area and the celebrations were painfully short-lived. Portuguese referee Artur Dias blew for an infringement when flapping, goalkeeper Karl-Johan Johnsson egged a collision with Christopher Julien in the area. 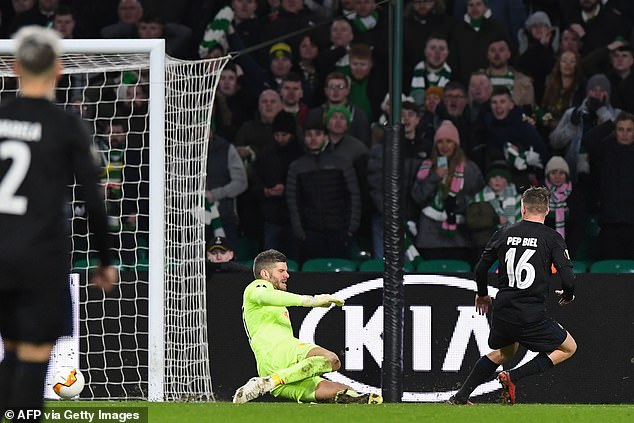 In a world of over-protected goalkeeper, replays showed there was nothing in it.

If Celtic were entitled to feel sore about that they could have no complaint with a calamitous Copenhagen opener in the 51st minute. Nor indeed with their eventual exit.

Since returning from injury Jozo Simunovic has developed a habit of giving supporters the fear. So it was, then, that the Croatian allowed a meat and drink long ball to bounce before playing a disasterously short pass back towards Fraser Forster.

An open invitation for the lurking, pressing substitute Michael Santos the wide man had time and space to pick out the lurking N’Doye in the centre. Christopher Julien did his best to smother the danger, the ball falling kindly for Santos to dink the ball into the net. Copenhagen had their away goal and, despite Celtic’s brief slither of hope, never looked back. A completely different side to the team who should have been dead and buried inside 15 minutes in Copenhagen Stale Solbakken’s team were worthy winners in the end.

Before kick-off the confidence which followed the first game seemed to ebb away with the appearance of the teamsheet. Leigh Griffiths was on the bench, Mohammed Elyounnoussi replacing the striker as Neil Lennon reverted from the 3-5-2 which has served his team so well to the 4-2-3-1 of old. The effect was slightly unnerving. It all felt reminiscent of the 4-3 defeat to Cluj On nights like this Celtic Park is renowned for its noise and colour. Yet the old place was quiet and nervy for long spells here. If Celtic hoped the passive, error strewn Danes of the opening exchanges a week ago would show up here they were swiftly disabused of the notion. 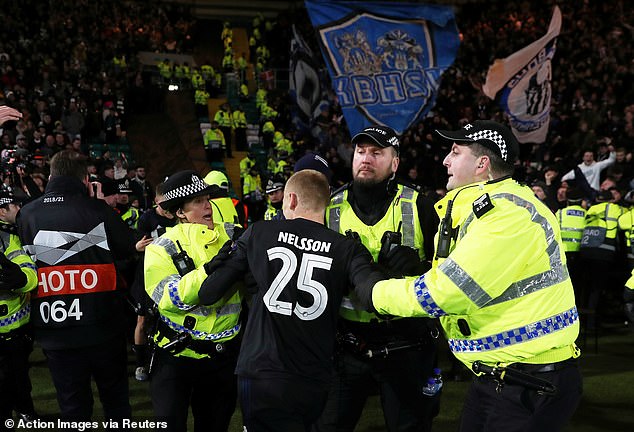 The first goal was crucial in the end. It came after a first half when Celtic had all the best of the chances. Yet where Edouard looked liable to score at will last time out the Frenchman couldn’t get going here. James Forrest was back from injury to provide support for the striker and had he made contact with Elyounoussi’s cross towards the back post after 18 minutes he would have scored.

The best chance of the half came four minutes later. Despite his recent lack of game time Elyounoussi carried promise on the left. And the Norwegian crafted – and missed – a wonderful opportunity when he left Carlos Zeca for dead on the left touchline, making ground until the overlapping to hold the ball up for the overlapping Tom Rogic. A poor clearance from the Australian’s cross fell straight at Elyounoussi’s feet and he blazed a first time effort high over the bar from 14 yards. Falling to his knees he knew – as did everyone – what a chance it was.

What joy Celtic had came on the left flank. After half an hour Greg Taylor’s cross from the left flank was headed against Tom Rogic by the diving clearance of Mikkel Kaufmann, the ball striking the base of the post and bouncing to safety.

After a cagey start Celtic worked up a head of steam before half-time. The loss of left back Mikkel Kaufmann for Michael Santos before half-time forced Copenhagen to make their first change of the night. Early in the second half it would prove a decisive development.

Celtic ended the first half strongly, Elynounoussi almost capitalising on a bizarre error by Johnsson to flash an effort across goal. Right on the whistle Edouard finally had a decent chance, a downward header from the Frenchman straight down the throat of the keeper. In truth it summed up his night.

When Celtic most needed their top scorer to be on his game, he had his poorest game in weeks. Nothing he did came off. Nothing.

Celtic began the second half with aggressive intent but will reflect ruefully on those opening six minutes of the second half. The disallowed goal left them sore enough. An accident waiting to happen, the shaky defending of Simunovic gifted Copenhagen a goal they simply hadn’t looked like scoring. The celebrations of the 1500 Copenhagen supporters in the corner were unrestrained.

With 20 minutes left to play Neil Lennon had nothing left to lose. Throwing on Leigh Griffiths for Elyounoussi the Scotland international’s first contribution was to fire a snap first time shot straight at Johnsson from 12 yards with the keeper lying on the ground.

The penalty – rightly awarded where Sigurdsson clearly handled in the area – threw Celtic a lifeline which proved painfully brief. In the final stages Copenhagen looked fresher, fitter and stronger.

They had men left over when Rogic lost possession in the middle of the pitch and the impressive Falk sent Pep Bilel in for the killer second. N’Doye’s goal in the final minutes was academic. After a series of confident, impressive performances in the Europa League Celtic picked a bad night to fall to bits.