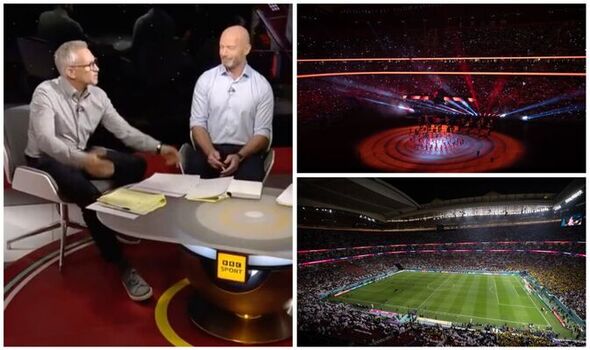 World Cup fans have been left fuming with the BBC after the opening ceremony for the tournament was not broadcast on TV prior to the opening match of the tournament. The glamorous ceremony took place at Al Bayt Stadium before hosts Qatar took on Ecuador, but UK viewers were denied the chance to watch the ceremony in the build-up to the curtain raiser.

Viewers tuned in on Sunday afternoon expecting to watch the opening ceremony live in Qatar ahead of the tournament’s first fixture, a historic moment in Asian football as it is the first World Cup to be hosted on the continent.

However, BBC viewers were disappointed to discover the coverage was not part of the programming on the UK’s most popular channel, despite BBC retaining the right to show the event.

Instead, football fans were forced to log on to BBC’s digital platform, iPlayer, on their website to tune in to watch coverage of the ceremony. And the absence of the popular event from the TV schedule left some fans raging on social media.

One Twitter user, @vinugeorge, accused the BBC of double standards, writing: “Where is the opening ceremony and why isn’t this on BBC one. Or is learning about cultures a one way street? Poor @BBCOne @GaryLineker.”

Another user, @thefoodentist, said: “Why do we pay tv license for you to censor our viewing and not show the World Cup opening ceremony that we have all been looking forward to watch?” @muhsin_mcr added to the frustration and said: “Missed the whole opening ceremony whilst the bbc were just waffling.”

One tweeter with the handle @OneMaj wrote: “BBC didn’t even show the opening ceremony, they did for all other sport events including world cups, euros, Olympics. @BBC and @GaryLineker you’re embarrassing.”

@jonathangrade suggested the BBC may have opted not to show it on purpose, saying: “Not sure I agree with the BBC’s refusal to allow fans the opportunity of seeing the opening ceremony. #FIFAWorldCup2022”

He was joined by @richardbraddon, who questioned why the Russia ceremony was shown four years ago but not Qatar: “Spent half an hour watching @bbc to see World Cup Opening Ceremony before realising it had already started and BBC aren’t showing it. If it’s a political decision, why did you broadcast the Russian opening ceremony in 2018? #QatarWorldCup2022”.

Express Sport has approached the BBC for comment on the matter.