Villa scored early on through Ben Chrisene and a Brad Young penalty; Melkamu Frauendorf’s deflected effort gave Liverpool late hope as the home side win their fourth FA Youth Cup and first since 2002 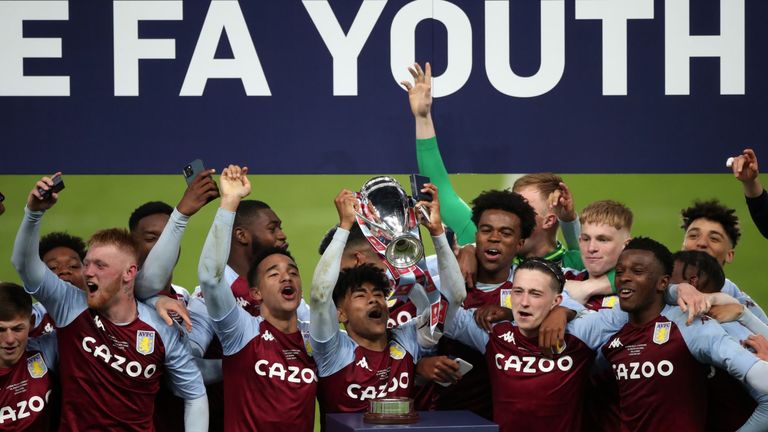 Aston Villa won their fourth FA Youth Cup – and first since 2002 – with a commanding display in a 2-1 win against Liverpool at Villa Park.

Ben Chrisene and a Brad Young penalty inside the first 11 minutes inflicted the damage, but the scoreline did not do full justice to their performance and, while Melkamu Frauendorf’s volley deflected in off Seb Revan with 15 minutes to go created some late pressure, the hosts handled it.

Six of Villa’s side, watched by first-team head coach Dean Smith and backroom staff John Terry and Craig Shakespeare, started against Liverpool’s first team in the FA Cup defeat in January after a Covid-19 outbreak sidelined the seniors.

That experience showed during the early stages as a team which had scored 26 goals in five ties ran rings around opposition who had conceded only three times – and never more than twice – on their way to the final.

There was an element of panic about Liverpool’s opening 25 minutes and it was not a great spell for centre-back Billy Koumetio, the only Reds player with first-team experience, having played 45 minutes against Midtjylland in December’s Champions League dead rubber.

He carelessly conceded a corner which allowed Villa to keep the ball in the final third and the cutback from Arjan Raikhy was clinically dispatched by Chrisene.

Koumetio then got caught the wrong side of Young, who went down running away from goal, having been accidentally clipped by the recovering defender. The livewire striker picked himself up to chip home the 11th-minute penalty.

Both goalscorers then hit the same post in separate attacks as they threatened to overwhelm their opponents, with Carney Chukwuemeka pulling the strings in midfield.

Getting to half-time only two goals down represented something of a success for Liverpool, but substitute Frauendorf’s deflected shot came too late to change the outcome.