Pep Guardiola labelling Manchester City’s current situation as an emergency has all the hallmarks of a hoax call.

Now it does, anyway. It did not an hour before kick-off, with six first-team stars left back in the North West for different reasons and only two senior outfielders on their bench.

Guardiola was not kidding when suggesting that the lengthy absentee list constituted something of a crisis earlier in the week – even for such a ludicrously talented squad. He was perfectly justified in fearing that an upwardly mobile Aston Villa, with the impetus of Steven Gerrard, could represent trouble. They very nearly did. 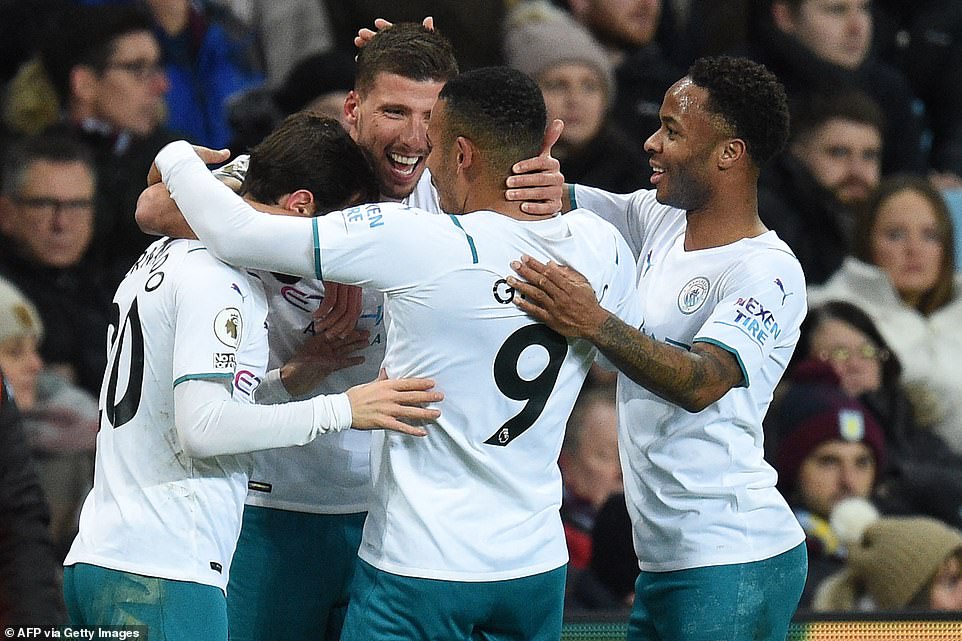 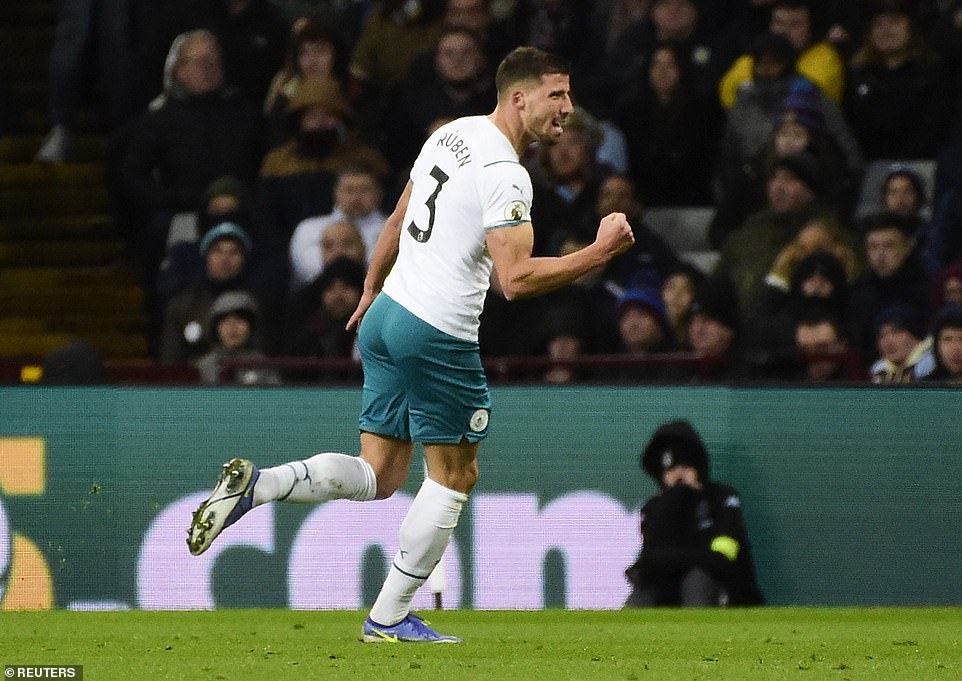 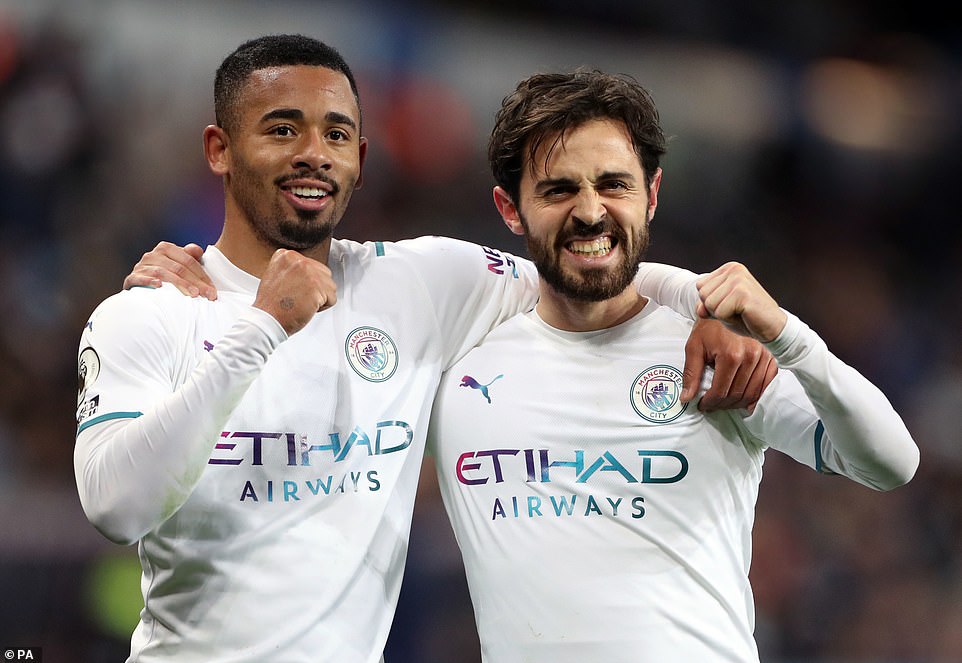 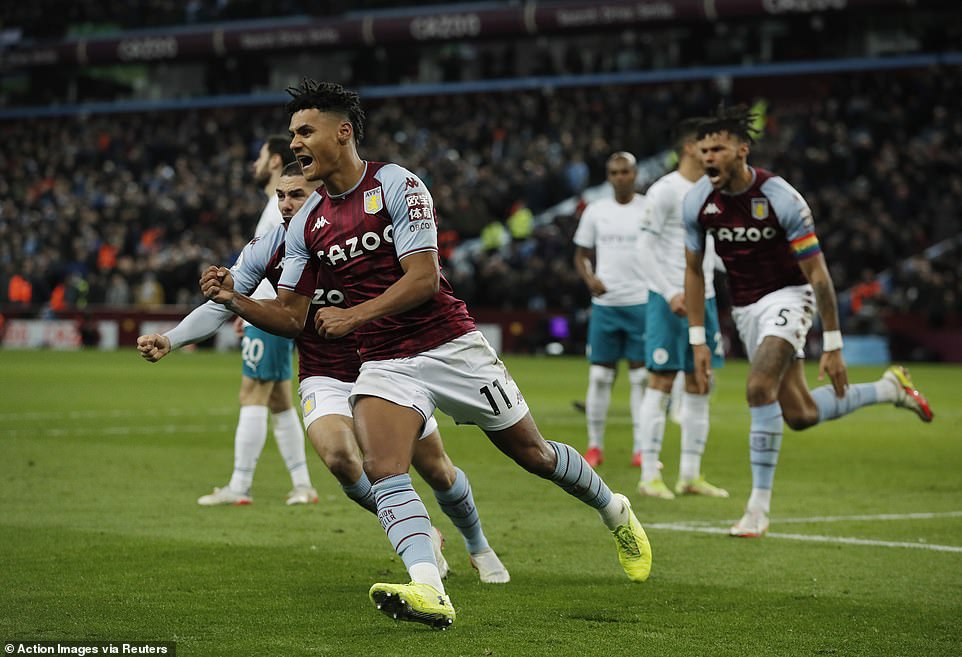 But this team constantly find a way of getting it done. At times towards the end, they needed to dig deep and relied on their goalkeeper. Passes went awry, Villa had an ascendency, yet City left with another victory to go with the rest.

And they left with a second goal worthy of a siren, Bernardo Silva’s quite sumptuous finish, the sort of which that ought to be bottled and sent to the Football Museum as proof of Guardiola’s genius tenure in England for future generations.

The measure of dominance was such that Villa just could not vacate their own penalty area for the opening 11 minutes. That is how long it took for them to register a touch inside City’s half, paralysed by the invention and confused by the overloads in wide areas. Ollie Watkins was the man who had that touch and, with the crowd up, did well to manufacture an opportunity for Leon Bailey at the back post.

City scrambled back and snuffed out Bailey’s threat but there was every chance that Steven Gerrard – who had been agitated with his full backs for an erratic defensive shape – could see his side cause problems if their tempo remained high and possession direct. 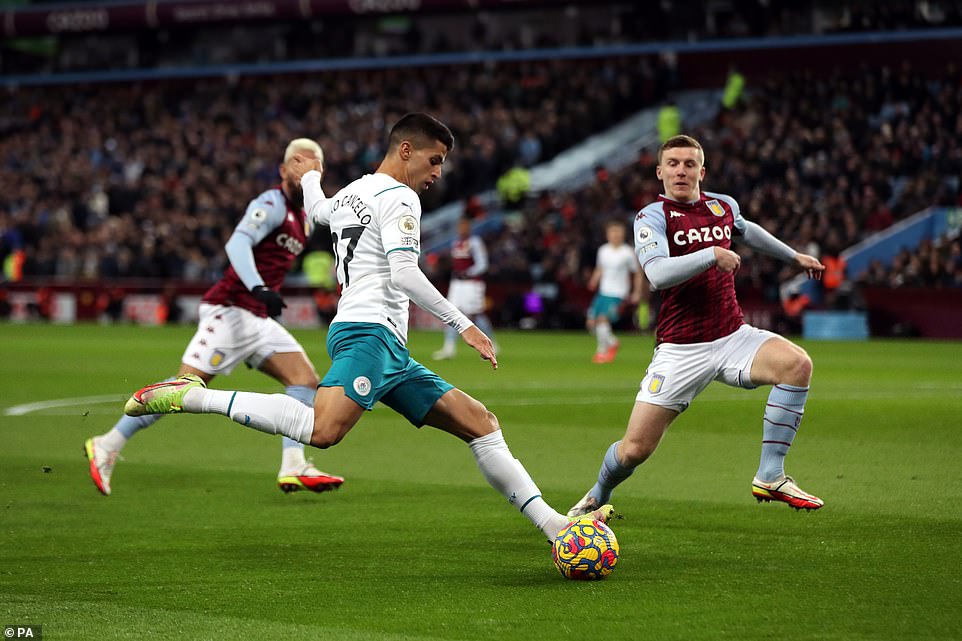 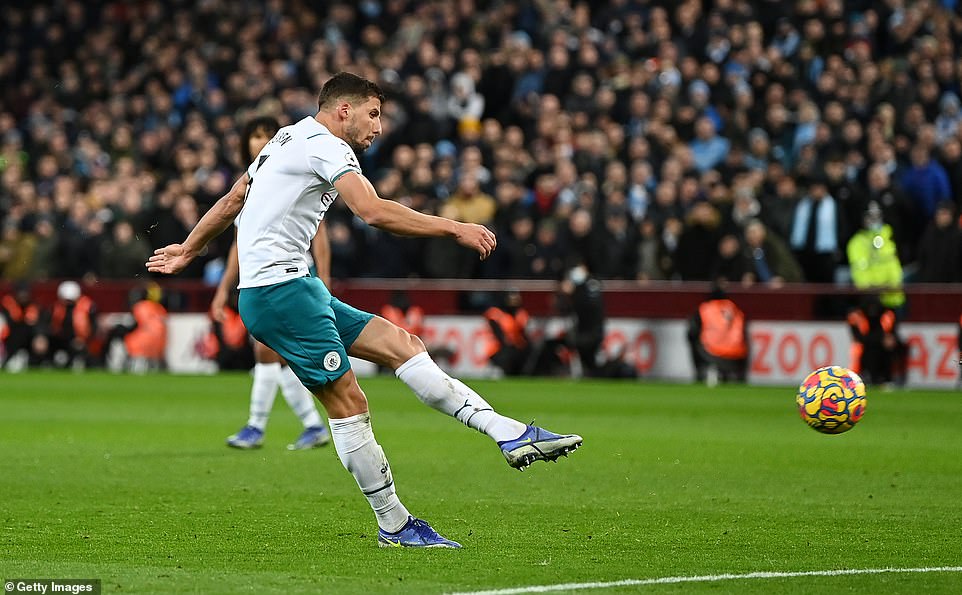 The deadlock however was broken by Dias is unusual fashion, hitting a left-foot shot into the corner from outside the box 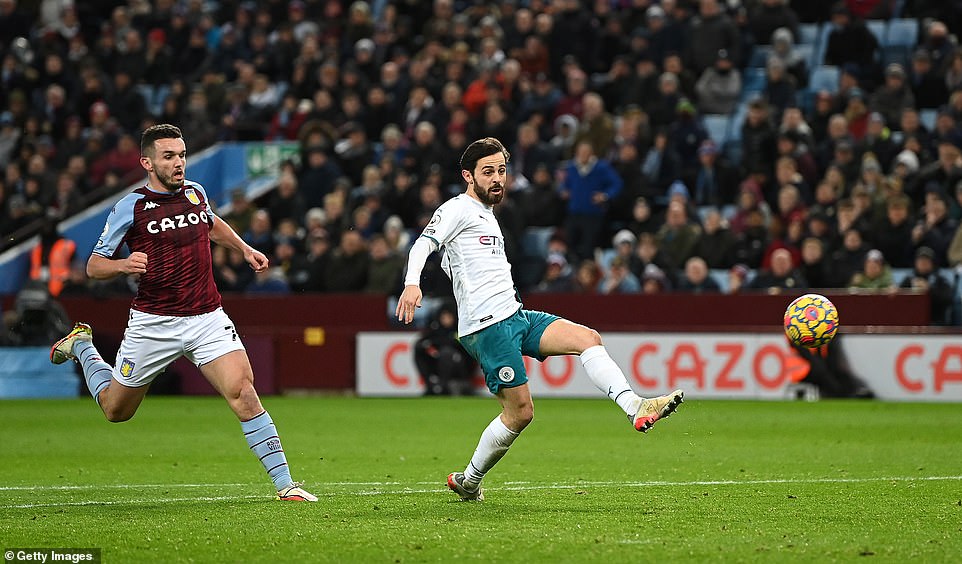 City then scored a brilliant second before the break, with Bernardo Silva volleying home Jesus’ lofted cross in the box

It did for a bit. Bailey infuriated the home fans when dallying as he broke free from midfield and delaying a pass, although City were unfortunate not to have already been in front midway through the first half. Joao Cancelo, Gabriel Jesus and Rodri all went close, two of them drawing decent saves by Emiliano Martinez.

Raheem Sterling’s purposefulness posed a tough assignment for Matty Cash and that is where the opener came from three minutes before the half-hour. Sterling spent the night driving at Villa’s byline and flew beyond John McGinn, cutting back into area for someone to attack. City did not legislate for that man to be Ruben Dias.

Dias was on the edge of the box and, despite watching his manager berate Oleksandr Zinchenko for shooting wildly earlier on, swung a left leg. Brave guy. The effort took a nick off Bailey and curled into Martinez’s corner. Dias, quite incredibly, became City’s 17th different scorer of the season.

Guardiola has said on countless occasions that is how this carnation of City win another title, by everybody chipping in. There is no Sergio Aguero to rely upon these days and, until a frontline striker arrives at the Etihad, quite a few will need to register five goals or more for the year. Still, Dias isn’t necessarily one of them. 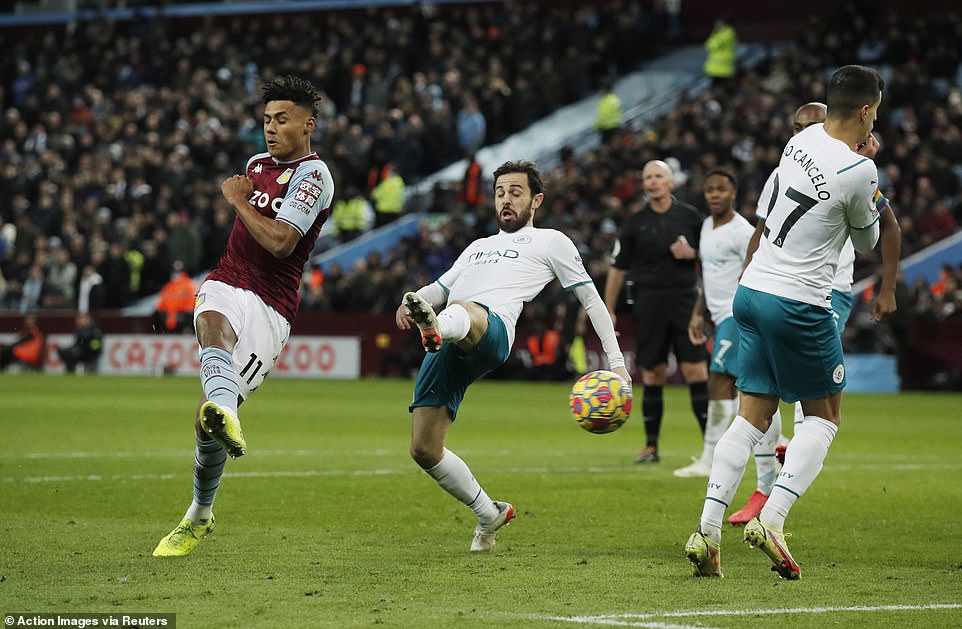 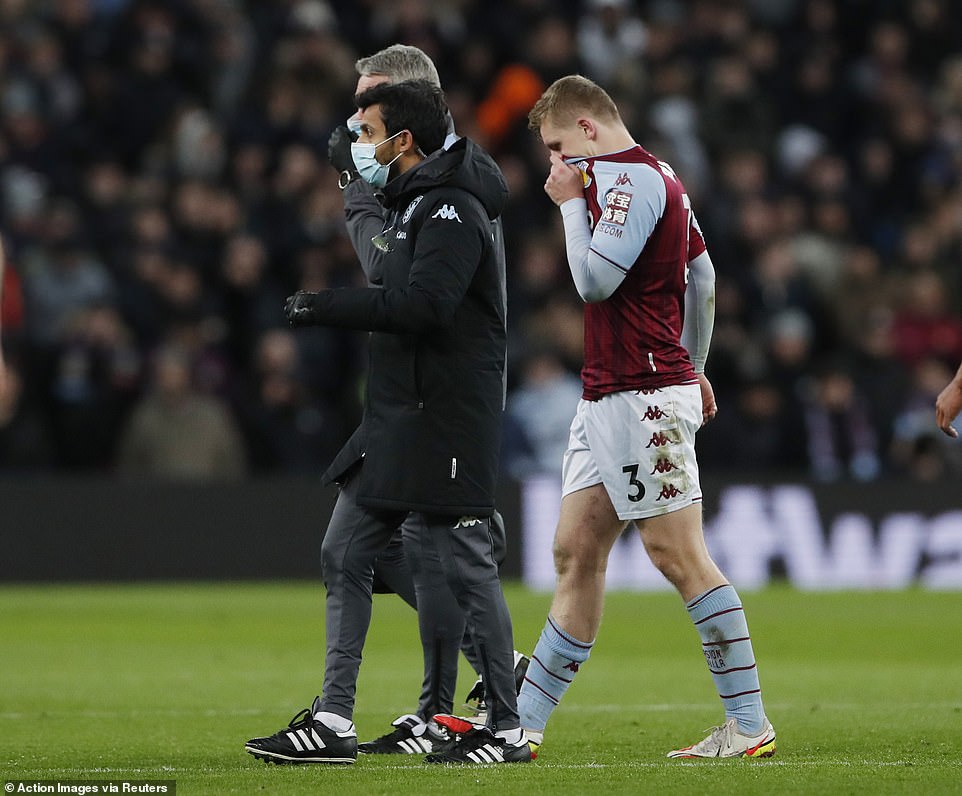 The home side then lost defender Matt Targett to injury, with the left-back replaced by Carney Chukwuemeka 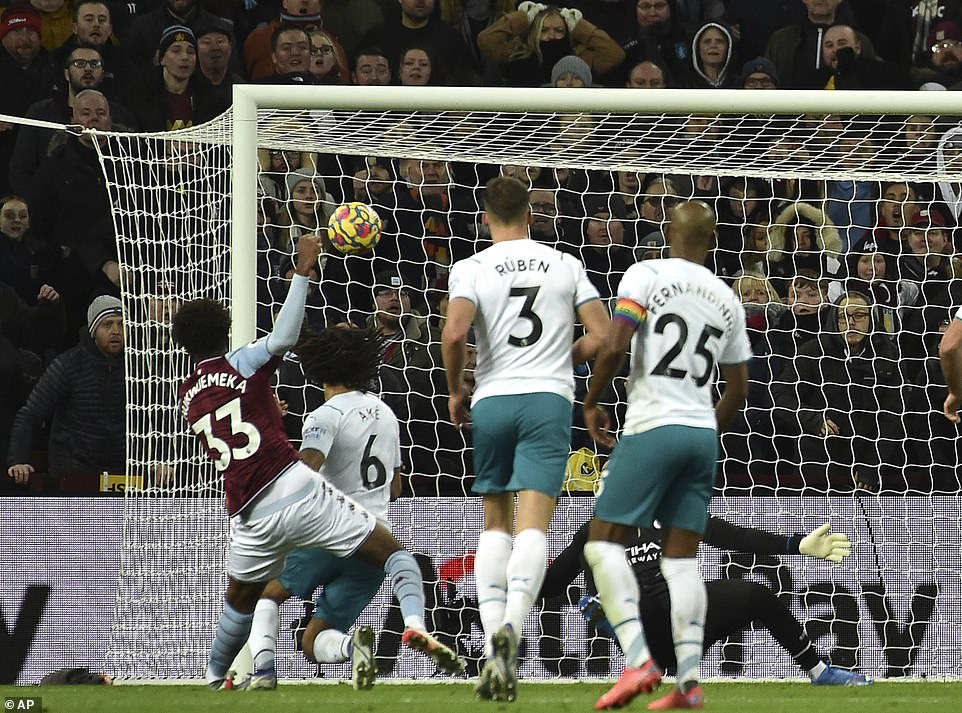 And Chukwuemeka nearly found an equaliser after coming on as a substitute, but was denied by a brilliant Nathan Ake block

Bernardo Silva is, though. And what a stunner his was, two minutes before the break. The sort of move that had even Guardiola laughing on the City bench. Villa were attacking but not for long, Fernandinho looped a ball forward for Jesus and suddenly the visitors were in. Two on two. Villa were done for. Jesus waited, clipped a perfectly weighted pass right onto Silva’s left instep. Volley, goal, Martinez looking over his shoulder in admiration.

Twenty-one other players on this pitch would have put their laces through that or taken a touch. Not Silva. Prince William, sat in the directors’ box, might well have bowed at its grace.

Silva did not cover himself in glory shortly after half-time, however. The Portuguese was uncharacteristically sleepy from Douglas Luiz’s corner, allowing Watkins to steal a yard and steer into Ederson’s near post. From nowhere Villa Park was suddenly alive, telling Jack Grealish – jogging up and down the touchline – rather loudly that he ‘used to play for a big club’.

Villa fancied this. McGinn swung towards Watkins, only for Ake to steal a march on Ezri Konsa inside the six-yard box. VAR decided the coming together was not enough to award a penalty.

The gloved Guardiola appeared pensive, spinning on his heels as Jesus hooked a great chance over the bar. There were then indebted to Ederson, spreading himself to divert lively substitute Carney Chukwuemeka’s chance over the bar when the Villa youngster went clean through. 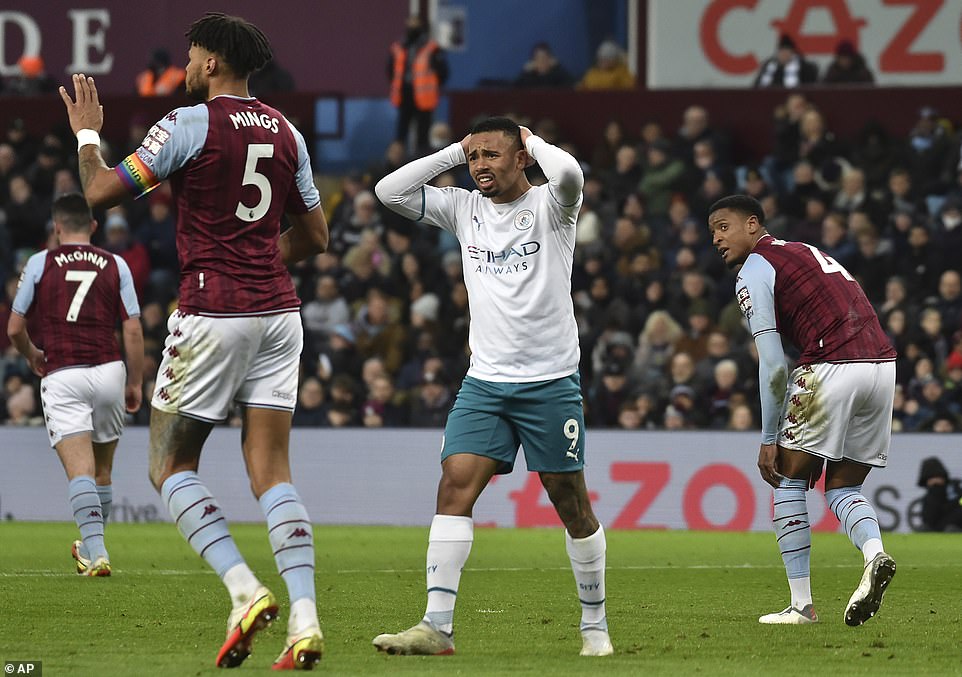 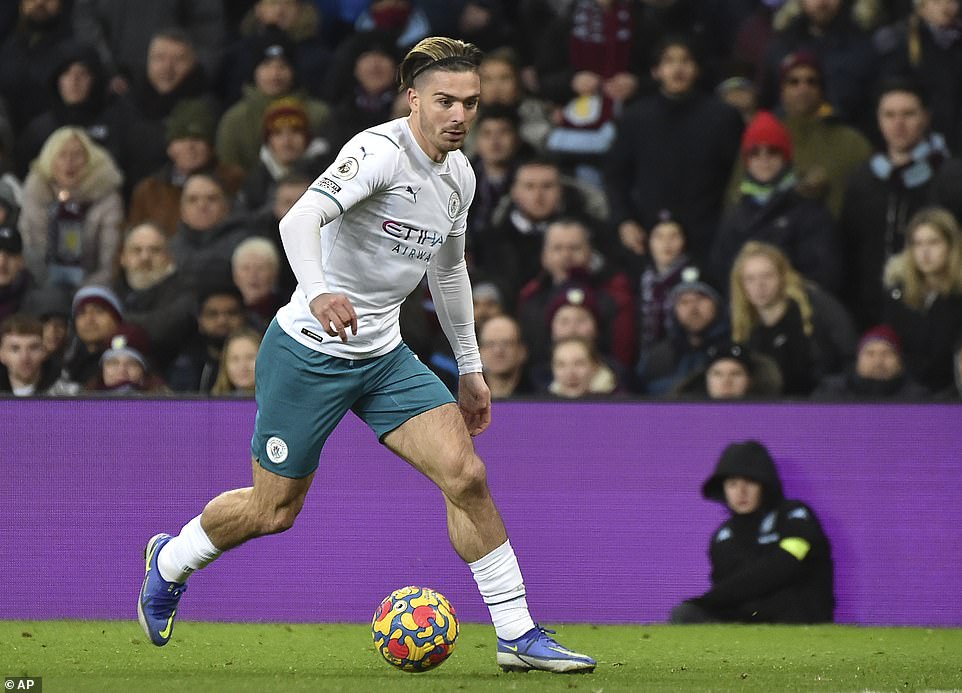