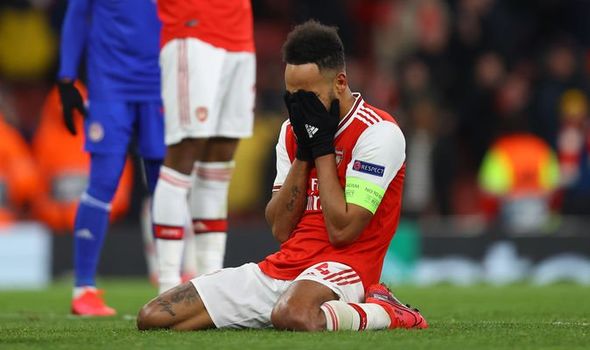 Arsenal were dumped out of the Europa League by Olympiakos at the death on Thursday night after being taken to time. Pierre-Emerick Aubameyang looked set to be the hero after an acrobatic finish but Youssef El-Arabi’s goal dumped the hosts out, with Aubameyang missing a golden opportunity to save his side in the final seconds.

The Gunners came into the clash leading on aggregate thanks to Alexandre Lacazette’s goal in Athens, but after a dire first half, Pape Abou Cisse in an equaliser for the Greek visitors.

That left Arsenal needing a goal to avoid extra time and penalties but they could not hit the back of the net and were forced to play an extra half-an-hour.

Aubameyang’s overhead kick looked set to power Arsenal into the next round only for El-Arabi to finish in the 119th minute to dump Mikel Arteta and co. out.

Gabon international Aubameyang, who boasts 20 goals this season, had a gilt-edged chance to salvage a draw on the night and an aggregate victory in the tie only to fire wide, leaving him on the verge of tears.

So how did Arteta’s men perform at the Emirates as their season suffered a major gut punch? Express Sport rates and slates the north London outfit’s individual displays. 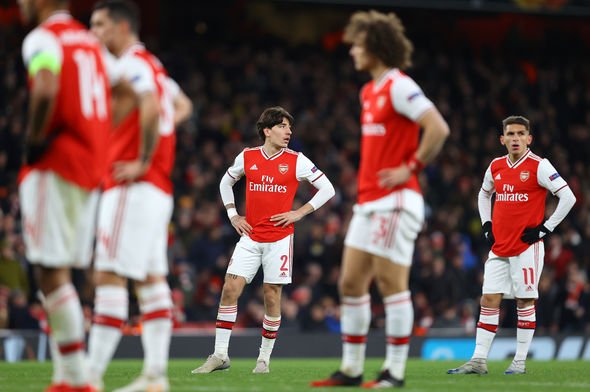 Had very little to do but twice had to dash out of his goal to prevent disaster. Great save to prevent second Olympiacos goal.

Kept giving the ball away early on, and he was not alone in that. But steadied after the break. Forced off in extra time through injury.

Subdued performance from the boy who has been such a star lately. But kept going and worked hard.

Worked hard and tried to get Arsenal going. But like so many, little end product. Unsurprisingly subbed.

Covered well and worked very hard. Stopped a couple of situations getting very awkward. But unable to spare Arsenal from major embarrassment.

Free kick just over after good burst through the middle. Kept battling away but final ball too often poor. One eye-catching second-half run, but could only win corner.

Floated in and out of the game. Some nice touches but did not produce enough.

Some nice touches, moved the ball well and tried to prompt things. Looked like he’d popped up as the Arsenal hero with a stunning overhead kick only to miss a golden opportunity to win it.

Lacks confidence despite return to scoring form, firing a few shots high and wide. Had the ball in the net but effort ruled out for offside. Subbed off at half time of extra time. 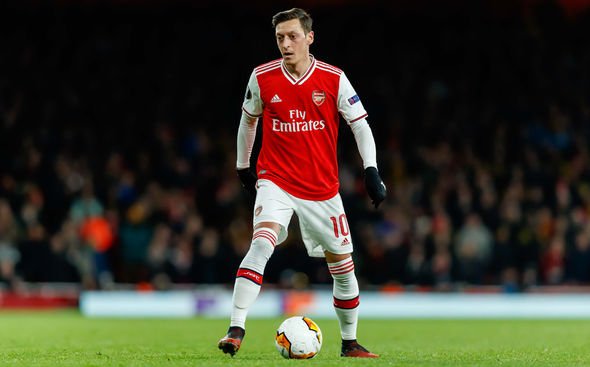 Gave the ball away in a move that led to Olympiakos hitting the crossbar.

Replaced the injured Mustafi. Nowhere near El-Arabi for the goal.

Helped up the tempo a bit more.