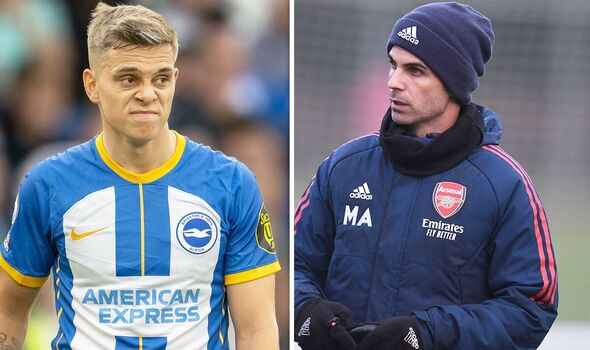 Arsenal have been given the opportunity to sign Brighton winger Leandro Trossard, according to reports. The Gunners are looking at alternative targets following Chelsea’s capture of Mykhaylo Mudryk.

Mudryk was the top target for Arsenal in the first half of the January transfer window. However, Chelsea stormed ahead of their London rivals on Saturday and matched Shakhtar Donetsk’s £88million asking price.

Arsenal have already been linked with Barcelona star Raphinha since the news of Mudryk’s impending move to Stamford Bridge. They were keen on the Brazilian last summer before he left Leeds for the Nou Camp.

But Trossard seems to be another option. The Independent claims the Belgian has been offered to Arsenal.

Trossard was excluded from the Brighton squad for Saturday’s 3-0 win over Liverpool. He was dropped due to an alleged lack of application in training.

Express Sport revealed on Friday the 28-year-old had taken the Eurostar out of the country following his axe from the squad. The player’s agent has since released a statement expressing his disappointment with the treatment of his client.

Tottenham have been linked with Trossard’s signature. And now it appears Arsenal could be an option in the final two weeks of the winter window.

Trossard joined Brighton from Genk in 2019 and has made 121 appearances for the south coast club in all competitions. He has 25 goals and 14 assists to his name in English football.

Brighton boss Roberto De Zerbi offered Trossard a lifeline after the victory over Liverpool. He insisted he does not want the player to leave but just wants his rules followed by each member of the squad.

De Zerbi told reporters: “Yes but I wanted to answer clearly about Leo. I am sorry for this situation, I think I didn’t make a mistake with him.

“The people who work inside of Brighton know very well the situation. I am fine with myself. I am open to waiting for him because he’s a good guy. He’s a very good player for us, a very important player.

“I don’t want him to change team but he has to understand that he has to work with my attitude and in my way because I am the coach and I decide the rules inside of the dressing room. I have the responsibility of my players, of my club.”