In the end the big names showed up. Pierre-Emerick Aubameyang shot, Mesut Ozil made a well-timed run and headed the ball with perfect precision to Alexandre Lacazette and the striker was in the classic poacher’s position to give Arsenal a decisive lead over West Ham United.

The 1-0 victory at the Emirates was celebrated with extravagant joy on Saturday. The stars came to Arsenal’s rescue – at least on the face of it. The reality was a little different.

The 78th-minute winner from Lacazette was not the sort of smooth operation that Mikel Arteta wants to see from his senior players. Aubameyang was largely anonymous. Like so often during the match, he had dropped outside the penalty area and tried to shoot through a forest of well-drilled West Ham defenders. This time he got lucky and the ball looped high off Declan Rice’s heel and into the danger area.

Ozil was waiting in the space and gave a brief glimpse of his cleverness and vision. The German possesses sublime ability but rarely looked like unlocking David Moyes’s defensive structure. He went close with a snap-shot in the first half but West Ham did not regard Arsenal’s biggest earner as too much of a threat. They were happy to let him have the ball when they retreated into a protective shell. The ricochet off Rice disrupted the defence’s shape and Ozil exploited the moment.

Lacazette, on as substitute for Eddie Nketiah, accepted the chance with glee. The Frenchman works hard but seems devoid of confidence. The assistant referee’s flag appeared to save West Ham – Reiss Nelson was in an offside position but not interfering with play – but Lacazette received his reward after a long VAR delay. 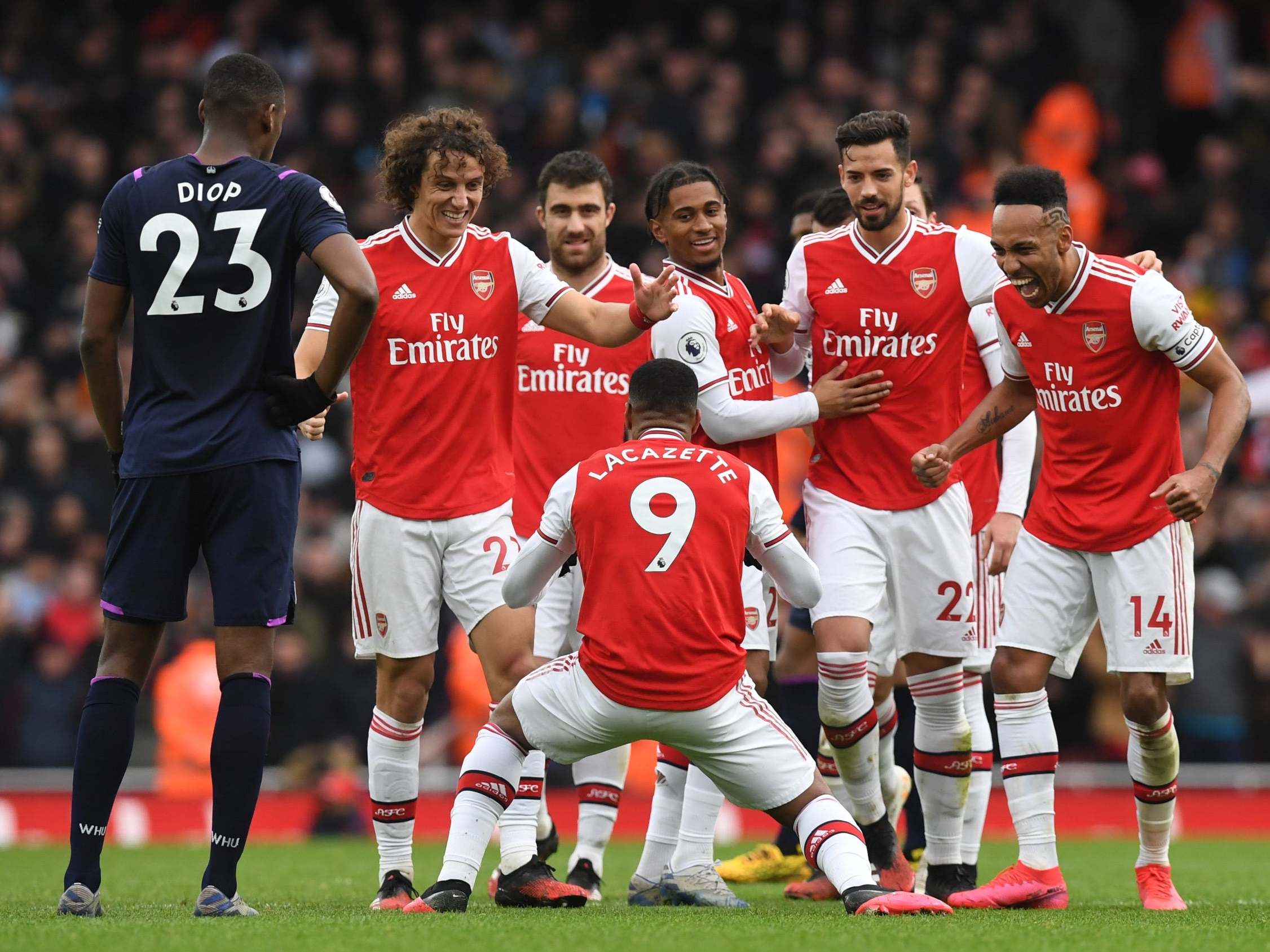 There was no obvious plan from the home side. Nicolas Pepe was aimless and his body language screamed discouragement. David Luiz’s first touch was questionable, as was his use of space. Granit Xhaka gave the ball away to Jarrod Bowen in the opening minutes, allowing the West Ham winger to hit the post. The Swiss exerted no control over the midfield. Dani Ceballos, on the other hand, saw a lot of the ball and set the tempo.

The Spaniard’s metronome was beating slowly, though, and Arsenal’s approach work lacked crispness. They were ponderous in possession. Sokratis hit the top of the bar after meeting a precise cross from Pepe but most of the time West Ham were comfortable. A second-half run by Bukayo Saka dragged defenders towards the ball and opened up a hole for Nketiah but Lukasz Fabianski killed the threat. Arsenal are crying out for a player who can dribble past a man and pull a back four out of position.

Defensively, Arteta’s side had no answer for Michail Antonio. They did not need one. The West Ham winger danced along the thin line between a man-of-the-match performance and the sort of display that infuriates managers, team-mates and supporters. Antonio landed on the wrong side of the divide.

The 29-year-old tormented the Arsenal defence with his pace and strength but, once in position to apply the killer blow, showed a propensity for bad decisions and comical finishing. West Ham should have been at least two goals up by half-time. First Antonio rampaged down the right wing and into the area. Sebastien Haller was waiting in front of goal and the most simple of crosses would have offered the opportunity for the Frenchman to roll the ball into the net. Instead Antonio’s pass was a yard behind Haller. 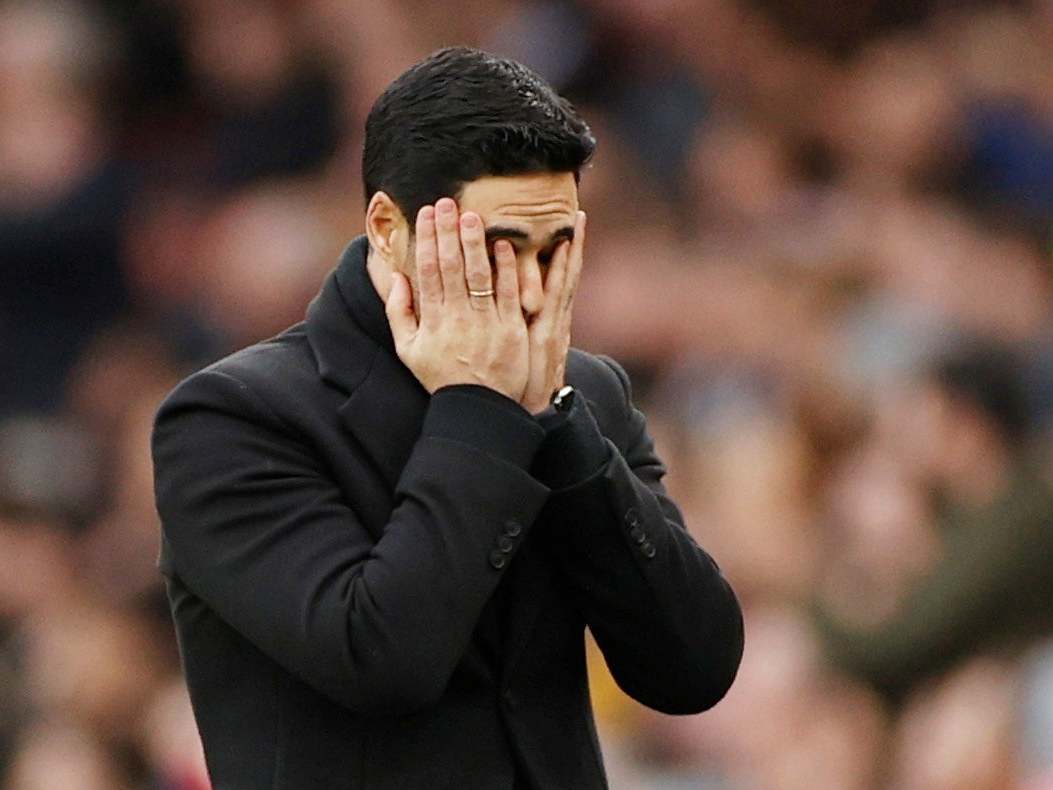 Then Issa Diop headed down from a Mark Noble corner and the ball came to Antonio a yard out. It seemed the Englishman could not miss. He missed.

In the second half Haller flicked on an Aaron Creswell cross and none of the Arsenal defence had thought to pick up Antonio. They did not need to mark him. The winger’s free header was tame enough to allow Bernd Leno to palm the ball away. “He gives us so much,” Moyes said rather ruefully about Antonio. It was not enough at the Emirates.

West Ham were solid, composed, disciplined and eager to break. Just before Arsenal scored, Bowen charged from the half-way line but slightly scuffed his shot from the edge of the box. The visiting side retained their ambition but their inability to put their opponents away undermined them.

Arteta talked of “turning the ship around” but his team were kept afloat by West Ham’s ineptitude in front of goal and a fluke deflection. The Arsenal manager will feel better when he can get his superstars to do the steering and give the team a real sense of direction.