Arsenal icon Ray Parlour made a tribute to Queen Elizabeth II following her passing, as the talkSPORT pundit downed a Cobra bomb and posted the video to his social media followers. Football has been postponed this weekend following The Queen’s death on Thursday and stars from across the sport have made personal tributes to the long-standing monarch, including Parlour.

The former Arsenal midfielder initially tweeted on Thursday: “The Queen you will be dearly missed x.” Then on Saturday evening, he posted a video captioned: “[Cobra emoji and bomb emoji] for the Queen. Have a great weekend everyone and happy birthday if it’s yours x.”

In the video, Parlour paid tribute to The Queen before pouring himself a Cobra bomb and downing it. “How is everyone, great weekend I hope you are having,” Parlour said to his followers. “Great night last night for myself in Worthing, I had a good time thanks to all the guys who turned up and had a really good time.

“Thanks to all you guys for taking me out as well, dancing in the street having a really good time. It was fantastic, that’s what it’s all about a little bit of spirit. But, it’s also a sad weekend because obviously of the passing of The Queen, unbelievable lady. What a legend she is, I was gutted that the Arsenal team went to see her in 2007, I had left the club. I would have loved to have met The Queen but didn’t get the opportunity to.

JUST IN: ‘Goosebumps’ God Save the King sung for the first time ahead of England South Africa Test 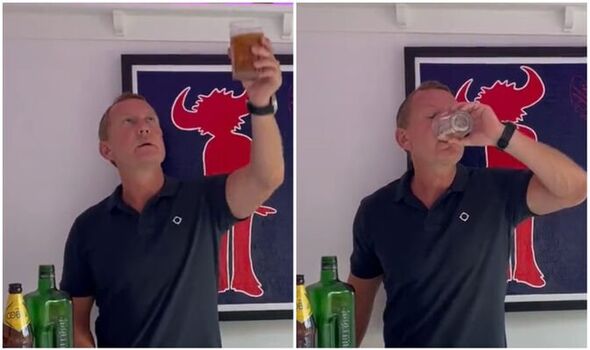 “What a lovely lady and it’s so sad, we are going to miss her dearly I promise you. So it’s got to be a Cobra bomb for The Queen, I am sure she didn’t drink Cobra bombs, she had a little tipple somewhere along the line but I don’t know what she usually drinks.

“But what a great, great lady she is and good luck to King Charles III now, so all the best Charles and hopefully all goes well, I am sure it will I am sure he is going to be a great king going forward, and pass it down to his sons in the end.” 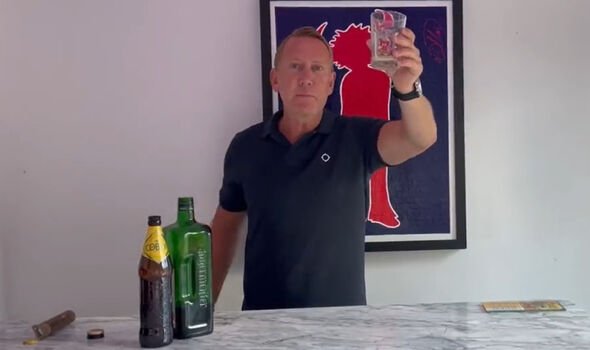 Parlour began preparing his drink, a Cobra lager mixed with Jagermeister, and said he was about to celebrate two birthdays. “I have got to do a Cobra bomb first, for The Queen,” Parlour said.

“Even if she doesn’t like Cobra bombs I am sure she will be looking down hopefully and saying ‘Thanks Ray, really appreciate that’, so here we go and by the way it’s an absolute tribute that all the games were called off this weekend for The Queen.”

Parlour finished pouring the Jagermeister into his glass of Cobra, before penning a tribute to Her Majesty. “Really admire her all through the years,” Parlour said. “70 years on the throne, unbelievable. As I did to my dad, back in the day when he passed away, all I can say ‘To The Queen’, which we did on Friday night, rest in peace.” Parlour then downed his drink before ending the video by saying: “Cheers everyone.”