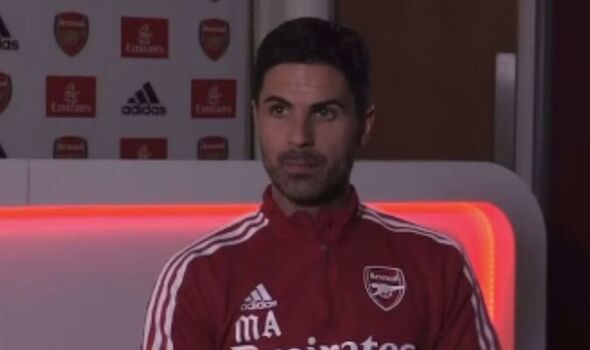 Mikel Arteta refused to fire back at Antonio Conte when quizzed on the Italian’s criticism of his ‘complaining.’ The Tottenham boss showed his ruthless streak by berating his opposite number after the north London derby win over Arsenal on Thursday as Spurs upped the pressure on the Gunners in the race for Champions League football.

After Arteta hit out at the officials, Conte said to reporters: “Arteta is a really good coach but he has just started this job and he has to be more focused on his team and not to keep complaining.

“In six months here [at Spurs], I have listened to him complaining a lot. He needs to be more calm. But if he doesn’t want to accept my advice, I don’t care.

“The red card was clear for me and if we want to complain we have the opportunity every game to talk about referees, decisions and postponed games.

“If you remember, Arsenal did well to postpone this game in an incredible way when only one player had Covid. I didn’t forget this because it made us a bit angry.

“If we want to complain I can also ask why we have to play again on Sunday at 12 o’clock and Arsenal do not play until Monday night and have one more day’s rest.”

Now Arteta has been handed the chance to respond but the Spaniard was not prepared to create unwanted headlines.

When asked about what he made of Conte’s comments, Arteta told Sky Sports: “I’m fully focused on Newcastle.”

The hostility between the two managers started when Arteta claimed he’d be banned for six months if he said what he really felt about the referee Paul Tierney’s performance.

“If I say what I think I will be suspended for six months and I want to be on the touchline for our next game on Monday night,” Arteta said.

“I want the referee to come in front of the cameras and explain his decisions because we were so excited to play this game and this beautiful occasion was destroyed tonight.

“I haven’t spoken with Rob Holding but you can imagine that having to leave so early in a huge match like this is very tough.”

Arsenal remain in control of their own destiny and they will finish in the top-four if they beat Newcastle and Everton on the final day of the season.

Tottenham, meanwhile, will look to continue applying the pressure as they prepare to face Burnley and Norwich.

Spurs are now just one point behind their rivals heading into the biggest week of their season.

Arteta’s side could go one point behind Chelsea by the time the Blues play next in the Premier League.

Chelsea face Leicester and Watford in their final two matches but they are firmly in the driving seat and are expected to finish third.