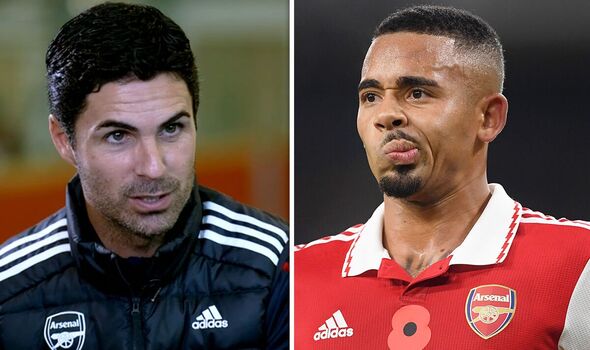 Arsenal boss Mikel Arteta admits the injury to Gabriel Jesus is worse than first thought. Arteta does not expect the Brazilian to be back fit playing anytime soon.

Jesus suffered a knee injury during Brazil’s final World Cup group match in Qatar in December. He returned to London a couple of days later and underwent surgery on the issue.

Arteta has remained coy throughout the last few weeks over the timescale on Jesus’ recovery. The former Manchester City star is off crutches and his leg is no longer in a brace.

He has posted videos on social media of his rehabilitation in the gym. But now Arteta has conceded he will still be without the striker for a while as the injury was more serious than initially expected.

Arteta told Sky Sports: “Hopefully we will have him back (for the final few months). Obviously it was a serious injury, a bit longer than we expected it.

“He is going to try to do everything he can to make it shorter but we’re going to miss him for a while.” Eddie Nketiah has stepped into Jesus’ shoes since the resumption of club football after the World Cup.

The former England under-21 international has scored four goals in as many games and Arteta is impressed with his progress. He said: “The good news is that another academy player like Eddie, who has been very patient and has been working hard and has been evolving in the way that we wanted, now he has the opportunity to show what he can do and he certainly is.”

Arsenal play Tottenham on Sunday in the north London derby. They haven’t won away at their rivals in the league since 2014 but can extend their lead at the top of the table to eight points with a win.

Speaking in his pre-match press conference, Arteta was less clear on the severity of Jesus’ injury. He said: “He’s progressing really well, he’s working really hard, he’s in the right place in terms of the time that we set for him, but he’s still a bit far.

“I’d like to see him very quickly but I don’t think it’s going to happen. We’re going to have to be patient with that one. But let’s see.

“It’s a complicated surgery, in any surgery there are always a lot of things where you have to be cautious. He’s a player that’s going to push to be really fast on the pitch.”