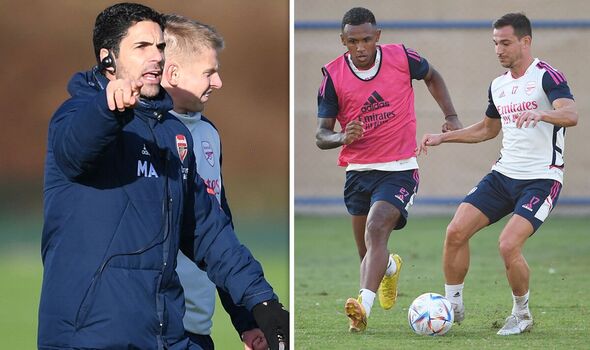 Arsenal have granted Cedric Soares permission to speak to Fulham regarding a January move, according to reports. The Portuguese’s exit could hint at a first signing for Mikel Arteta this window.

Cedric has been out of favour at the Emirates this season. After making 26 appearances last term, he has featured just four times in all competitions.

The 31-year-old has not been a part of the last three match-day squads and hasn’t been seen in first-team training pictures of late. Fulham were linked with Cedric last summer and again ahead of this window.

The Cottagers want to strengthen at right-back and it appears they are getting closer to doing that. Sky Sports reports that Cedric has been allowed by Arsenal to speak to the west London club over personal terms.

Arsenal: Cedric happy to fill in where needed

Fulham manager Marco Silva admitted late last week that he wanted to sign a right-back. And he refused to rule out a deal for Cedric.

Silva said: “I’m not saying that Cedric is true or not. We are looking for that position. I will not hide to you.

“Cedric is an Arsenal player. He’s fully involved with their squad. They are fighting for something really important. We are fighting as well.”

Cedric initially joined the Gunners on loan from Southampton in January 2020 before moving permanently on a free transfer the following summer. He has made 59 appearances for Arsenal and still has 18 months remaining on his contract.

But it appears Arteta is willing to part company with the player who has been capped 34 times by Portugal. Cedric leaving could see Arsenal pursue a deal for Spanish youngster Ivan Fresneda.

The Premier League leaders are reported to have a strong interest in the Real Valladolid star. Newcastle are also keen on the 18-year-old, who would only be allowed to leave at the right price in this window.

Fresneda only made his senior debut in September but has caught the eye of two of England’s top clubs. He plays at right-back so could take Cedric’s spot in Arteta’s squad.

Ben White has emerged as the first-choice in that position this season, converting from centre-back due to the emergence of William Saliba in the middle of defence. Takehiro Tomiyasu has also played the majority of his time at Arsenal at right-back but can also operate on the opposite side and in the centre.