Lock Matt Philip is a wanted man in Melbourne and should also be back on the Wallabies radar, according to Rebels coach Dave Wessels.

In barnstorming form this season, Philip was key to Melbourne's 37-17 win over the Lions on Saturday night at AAMI Park – his 50th Super Rugby match. 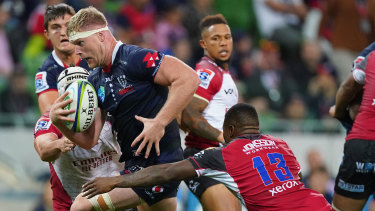 Matt Philip makes some hard metres for the Rebels against the Lions at AAMI Park.Credit:AAP

"When he started out I wasn't convinced but Dane saw it long before I did so Matt's got Dane to thank."

Rebels winger Andrew Kellaway continued his Super Rugby resurgence against the Lions, scoring his third double of the season amongst a tally of seven to lead the competition's try-scoring stats.

Coming off the back of their first win in Dunedin in the last round, the Rebels took the spoils against the Johannesburg-based Lions at their sixth attempt. 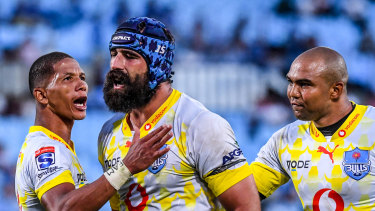 Josh Strauss of the Bulls celebrates with teammates after a try to Rosko Specman against the Highlanders.Credit:Getty

The win was sweet revenge after last year's meeting in South Africa when the Rebels blew a 28-point lead to go down 36-33, with a remarkable 20-1 penalty count proving costly.

Meanwhile, South Africa’s Sharks showed their teeth as they continued an impressive start to the Super Rugby season and moved to the top of the overall table by taming the Jaguares from Argentina with a 33-19 victory at King’s Park on Sunday morning AEDT.

In Pretoria, the Bulls won for the first time in five games this season by coming back from eight points down early in the second half to beat the Highlanders 38-13.