Samoan coach Matt Parish said he was left dumbfounded by a “weak decision” by Ashley Klein after the referee opted to only sin-bin Australian back-rower Angus Crichton for a forearm that knocked out Chanel Harris-Tevita in the World Cup final.

Parish’s comments were ridiculed by Australian coach Mal Meninga, who said he believed Crichton shouldn’t have left the field at all for what appeared to be an accidental forearm to the head.

The incident occurred in the second half after a Valentine Holmes knock-on. Crichton picked up the loose ball as referee Klein called the error.

Harris-Tevita and Crichton didn’t have enough time to respond to the whistle, with Crichton collecting his Samoan counterpart across the head as he braced for impact.

Parish, though, wasn’t impressed. “Five minutes into the second half our hooker gets elbowed in the head and gets carted off,” Parish said. “The referee makes a weak decision and puts him in the bin. Dumbfounded.”

Meninga rubbished Parish’s claims. “Seriously?” Meninga said when told of his rival coach’s comments. “My view is that he should’ve stayed on the field. It’s just silly.” 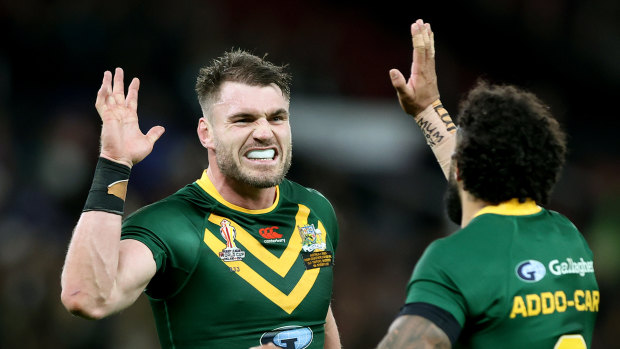 Crichton was quick to apologise to Harris-Tevita after the game. Crichton insisted he did not intend to harm the retiring Warriors utility, and apologised for the outcome of his actions. The pair had been planning to do some travelling together after the World Cup.

The World Cup match review committee will hand down their findings within 24 hours.

“As soon as it happened I went and spoke to Chanel,” Crichton said. “It was honestly like a reaction. I didn’t know he was coming and there was no malice in it at all. I am sending out my blessing to his family. It is all love between me and Chanel.

“He knows whenever I play football, I don’t try an injure anyone or try to hurt anyone. I know I am a good person. I play the game the way the game is meant to be played. It was honestly a genuine freak accident. I never want anyone to get injured on the field like that, especially knockouts.