Home » Rugby » ‘We wanted a better hand’: Hawks missed out in 2021 but will stay aggressive

‘We wanted a better hand’: Hawks missed out in 2021 but will stay aggressive

Hawthorn recruiting boss Mark McKenzie admits the Hawks did not bring in the improved draft hand they wanted through the trade period but insists their “aggressive strategy” will remain.

The Hawks, with their premiership dynasty now a fading memory, had hoped to fast-track a rebuild through the trade period. Key figures Jaeger O’Meara, Tom Mitchell, Chad Wingard, Jack Gunston and Luke Breust were put up for sale in exchange for high draft picks, but a deal could not be done. 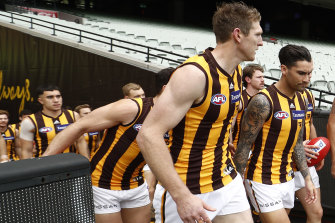 Hawthorn did not improve their draft hand as they had wanted.Credit:Getty Images

The Hawks had also hoped to clear salary cap space as life under new coach Sam Mitchell begins, but his primary task now is to ensure that the players offered up for trade can quickly refocus on the task at hand at Waverley.

“We wanted a better hand and we explored that. Also, our strategy is not just for one year. Our strategy is over a three- to four-year period, so if it remains with three picks inside 25, and we are able to get that over the next two years, that is a strong development for our footy club and that is a strong part of our list management strategy,” McKenzie said under fierce media questioning on Thursday.

“Even though we can still improve those picks [come the national draft], if it doesn’t happen, we are still pretty comfortable with those three picks inside 25 and we move on to focus on the next couple of years and improve that area as well.”

As it stands, the Hawks – having finished 14th this year with only seven wins – have selections No.5, No.21 and No.24 in November’s national draft.

Greater Western Sydney had interest in Wingard and the NSW born and raised Breust – the Hawks could have acquired pick 13 for latter, with an agreement to pay a hefty chunk of the sharpshooter’s wage – but neither wanted to uproot and head interstate. Giants list chief Jason McCartney has suggested Breust did not have enough time to fully digest a move.

“But, in the end, he [Breust] didn’t want to leave and that was great for our footy club. So that just shut down there,” McKenzie said.

McKenzie rejected claims Mitchell’s tenure was off to a rocky start amid industry claims the Hawks had embarked on a fire sale, and denied that they could have approached rival clubs earlier in the year seeking interest in the likes of O’Meara and Mitchell, declaring he and his team had worked on list strategy for up to three months.

He said the tight salary caps of many clubs and deferred payments into next year – these coming as a result of last year’s financial fallout from the pandemic – had contributed to what was a relatively quiet trade period but said the Hawks had been as open and aggressive as possible.

“I think it might have even strengthened our group that we are open and honest with those players. I think they have appreciated that.”

Former Hawks’ list manager Chris Pelchen said this week the Hawks were up to eight years from another flag, while Alastair Clarkson, in his final weeks in charge this season, said the club was a “long way” from premiership contention.

Asked where he felt the Hawks sat in terms of delivering a flag, McKenzie replied:“hopefully sooner rather than later. But our list management strategy will go for, look, over the next three to four years are pretty big for us. We are going to have no ceiling for what we can achieve.”