A tough ask got tougher for the Waratahs when the rain set in over Wollongong on Thursday.

Already relegated to an outside chance to topple the Chiefs at WIN Stadium on Friday night, the weather bureau's forecast for showers, wind and a possible thunderstorm was bad news for a team looking to bed down the confidence they drew from last week’s five-try win over the Lions. 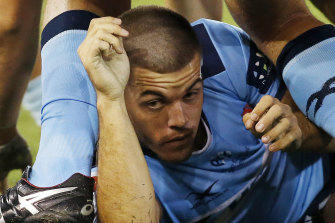 Mitch Short will emerge from understudy to starting halfback in the Waratahs’ round six clash with the Chiefs. Credit:AAP

The Waratahs played their first three games in wet or slippery conditions and lost all of them, unwanted moisture heaping pressure on the group's skills just as they were desperate for things to click.

They did last week on Bankwest's dry deck but the 'Gong is set to pose a wet and windy step up and the man required to set the tone is replacement halfback Mitch Short, elevated to the No.9 jersey after a hamstring injury took Jake Gordon out of last week's game.

Short said his brief was simple, pass well from the outset and tailor his option-taking to the conditions.

"If it's wet, look to perhaps kick a little bit more and play smart footy with the conditions pending," he said. "Land my core skills and control that game with Harro out there."

It will only be Short's second start in three seasons at NSW but, finally out of the shadow of Wallaby Nick Phipps, Short has pipped Junior Wallaby alumnus Michael McDonald for understudy duties to Gordon.

"For me personally, to get a start and see what I can do with that will be exciting, and I think to go up against a quality opposition for all of us, we're excited to rip into a quality Chiefs side," he said.

There were some wobbles against the Lions in the first instance when the loss of Gordon's assertive play was clear as day, but Short found his feet and steadied the ship with the help of his Randwick clubmate and NSW No.10 Will Harrison.

"The bench is the unknown, you just sort of jump on there and I wasn't too sure what was going on there but I think I settled into it … and felt better as the game went on," he said.

"This week, to be able to know I'm starting is good for the mental prep. I'll be ready, no excuses now, so see how I go. I'm excited to play."

Short has plenty going for him, not least his history with Harrison. They played a lot together at Randwick after Harrison's return from the U20s World Championships last year and then paired up again in the National Rugby Championship.

"We know each other's games well and get along quite well so it's pretty easy to slot back in there and fill the void," Short said.

The young NSW halves will have their work cut out against the Chiefs' 50-Test veteran Aaron Cruden and experienced halfback Brad Weber, who will be working behind a quality pack led by captain Sam Cane.

The Chiefs are coming off a bye still smarting from an embarrassing 26-14 home loss to the Brumbies in round four.

Reserve back rower Jed Holloway said the Waratahs' Canberra rivals, who will play the Sunwolves at WIN Stadium at 2.45pm AEDT, had given NSW some pointers on beating the Warren Gatland-coached side.

"(Forwards coach) Matty Cockbain said earlier in the week the Brumbies laid that blueprint for us, but we're just looking to build on the excitement that came from the Lions game," Holloway said.

"That first 20 minutes we put together is what we want to strive to have as our identity as a team."