Wallabies representatives Marika Koroibete, Isi Naisarani and Pone Fa’amausili won’t be eligible for selection in this Saturday’s Bledisloe Cup match against the All Blacks following a late night drinking session.

Three days out from the all-important match at Eden Park, the Wallabies released a statement explaining why the trio would not take the field. 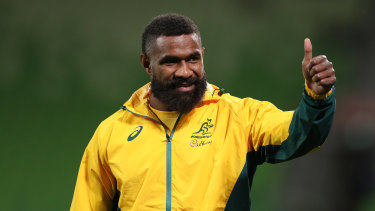 “The group had dinner and drinks at the team hotel last Saturday night after a full training week, prior to a training free day,” reads the Rugby Australia statement. “Three players breached team protocols by continuing to drink alcohol well beyond an agreed time.

“As such, Marika Koroibete, Pone Fa’amausili and Isi Naisarani will not be considered for selection for this weekend’s match.

“There was no illegal behaviour, no damage and no complaints made. No further investigation will take place, or any further action.”

Wallabies coach Dave Rennie will address the situation on Wednesday afternoon but released a statement explaining why the trio won’t be named on Thursday’s team sheet.

“We are building a culture of working hard for each other and being accountable for our actions,” Rennie said. “On this occasion, these three players haven’t lived up to that and we’ve taken a very clear stance.

“Ultimately these three men have paid a big price for their decisions but that’s the standard we expect of each other.”

Rugby Australia CEO Andy Marinos said in a statement: “Rugby Australia supports the action taken by the team, and the internal standards they have set for each other.

“As an organisation, we expect the highest standards at all times. While we also acknowledge that this is a minor incident, I applaud Dave and the team for taking such an open and transparent approach.”

Koribete was Australia’s best player in the France series, while Naisarani was expected to be in the matchday 23. Fa’amausili is yet to make his Test debut.

The news is a blow to Australia’s chances of winning the Bledisloe Cup for the first time since 2002.

Never miss a medal or great sporting moment with our Olympic update emailed daily. Sign up for our Sport newsletter here.