Last weekend we saw Collingwood star Ash Brazill and young Saints up-and-comer Tarni White succumb to the dreaded knee injury. Twelve players in the AFLW competition are now facing 12 months on the sidelines, a loss of income, physical and mental struggles, numerous hospital visits and a range of other issues as they recover from ruptured anterior cruciate ligaments.

As a player, it's heartbreaking seeing other players go down. As a teammate, it can be very emotional. I've had a couple of teammates rupture their ACLs and your stomach sinks as they are stretchered off the ground. The initial realisation hits that player hard, knowing they'll be missing out on football for the next 12 months. But it's more than just missing out on football that can be the challenge. 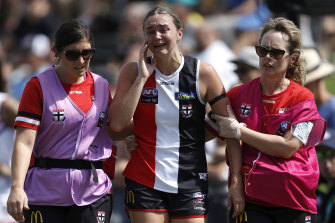 Injuries are a cruel part of sport. Some players have terrible luck and go through most of their sporting careers with chronic injuries or have careers shortened by them, while others are the 'lucky' ones and come out of their careers unscathed. Being semi-professional athletes, AFLW players work or study full time as well as play football. When we are injured on the field, we are forced to take leave our jobs or miss crucial study time.

The injury itself is stressful but for many players it can be compounded by financial stress and the long and lonely rehab process that occurs in the AFLW offseason, when players and clubs are not around.

There's been plenty of research looking at the rate of AFL-related ACL injuries in women compared with men. I'm no sports doctor or researcher, so I will leave that to the experts, but I would like to raise some of my thoughts on why, potentially, the rates are higher for women.

Our pre-season is much shorter than our male counterparts'. It is between eight and nine weeks consisting of 15 contact hours per week, as opposed to the men, who have five months of pre-season. It becomes a juggling act for our coaching and fitness staff; where do their priorities sit? Ultimately, all clubs are there to win premierships, so the focus for coaches and players is to work on our skills and game plan, which leaves very little time to complete extra injury prevention (IP) exercises. If a player has an extra 30 minutes to spare before training to do individual prep, most would choose to work on skills.

In addition, while working to get our bodies in peak condition and improve our skill set, we are usually working or studying full time. It is not unusual for me and my teammates to arrive at the club, tired from a long day at work, before training for more than two hours, attending team meetings and doing gym programs.

This can often mean we are at the club for a total of three hours on top of our eight-hour work day. As AFLW players we are very fit and very focused, and we continue to play what I consider to be high-quality football on top of our busy working weeks. This can, however, come at a cost and I wonder if injuries, such as ACLs, is one of these.

In 2019 we saw a spike in ACL incidents in AFLM during pre-season and at the start of the season. The step up in intensity from training to playing full games is significant and some would say a potential risk factor for injuries. In comparing the numbers of ACL injuries in the men's leagues with the women's league, there appears to be a common theme in that they are occurring at the start of the season, presumably when players' fitness and body strength is not at its peak. If the AFLW season was longer, giving us a longer period to focus on our fitness and injury prevention, and we had a pay increase enabling us to decrease the hours in our 'day jobs', would we see our ACL rates decrease in the same way we do in the men's league?

I am often asked "Do you think women should play because of the number of injuries?" I will usually respond with a blunt "Yes!" We know there is a risk of injury in any sport. We could talk at length about netball and knee injuries. But the benefits of playing sport are enormous, not just personally but in a societal sense. Let's keep encouraging young women and girls to keep playing and not let fear wear us down.

Emma Kearney is captain of North Melbourne in the AFLW