For years Tim Walsh and John Manenti preached to their sevens squads about the importance of hard work and adaptability. Without them, success in the helter-skelter world of seven-a-side rugby is elusive.

But at the start of a long sevens season, that culminates in the Rugby World Cup Sevens this weekend in Cape Town, both Walsh and Manenti had to practise, as well as preach.

After disappointing performances at the Tokyo Olympics, and two tournaments into the World Series, Walsh and Manenti swapped jobs. In December last year, Walsh moved from men’s coach back to his former role with the women’s squad, and Manenti shifted the other way, from the women’s to the men’s.

It was a highly unusual move, prompted by RA’s desire to return Walsh to the team he coached to an Olympic gold medal in 2016.

But given Walsh had not achieved the same success with the men’s team since 2018, and Manenti had coached the Aussie women’s team to tournament wins in those first two tournaments in Dubai, questions emerged about whether the job swap would end up destabilising – and sinking – both programs. 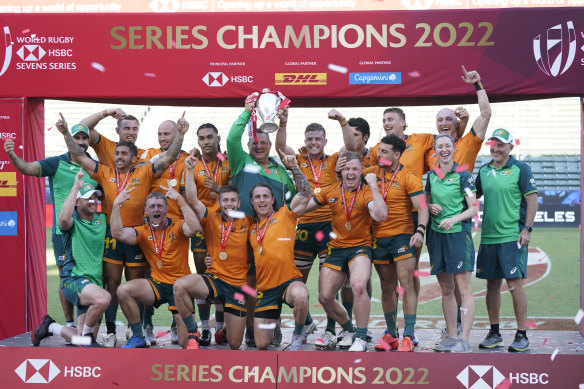 Fast-forward 10 months and those fears could not have been more unfounded. After spectacular seasons – with their new coaches – the Australian men’s and women’s sevens teams were crowned world series champions; the men’s team for the first time and the women’s for the third time.

The Aussie women also won the Commonwealth Games gold medal. Australia are the top seeds in the women’s Rugby World Cup Sevens tournament, and second seeds in the men’s.

“You are put in situations, and sevens is about adapting. I won’t speak for Johnny but both of us have been in sevens for a fairly long time and you just adapt,” Walsh said.

“We are in privileged positions where we are able to coach national teams in a game we love, so you get on with it, you enjoy your job, you work hard and you make it happen.

“The results to date have taken care of themselves, and that’s to the (credit) of the program and how both players and staff handled themselves through the transition and not made a deal about it.” 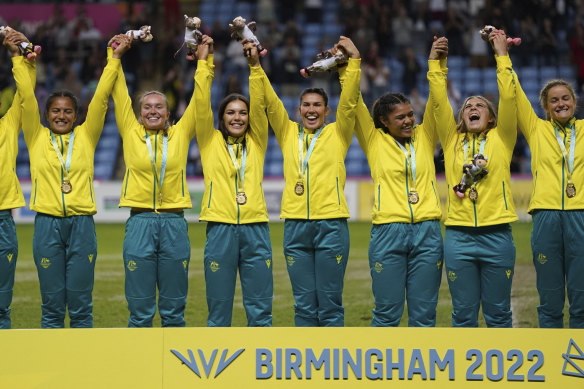 Manenti said the success of 2022 was down to the hard work put into the years before the coach swap.

“Both programs were really well set up, prior to the change. Obviously, Tim and I have slightly different skill sets but all that’s done, we have been able to strengthen both groups by bringing in our skill sets on top of what was already there,” Manenti said.

“The basis and the hard work for both programs started post-Tokyo, and was built on the back of disappointment and whatnot, but also a need to be better.

“Both came out of really good tournaments in the double headers in Dubai to start the season, and then we obviously changed over and continued to flow with both programs. But its obviously been a great move by RA, but probably the work behind the scenes in the previous period from (sevens performance manager) Scotty (Bowen) and others paved the way.” 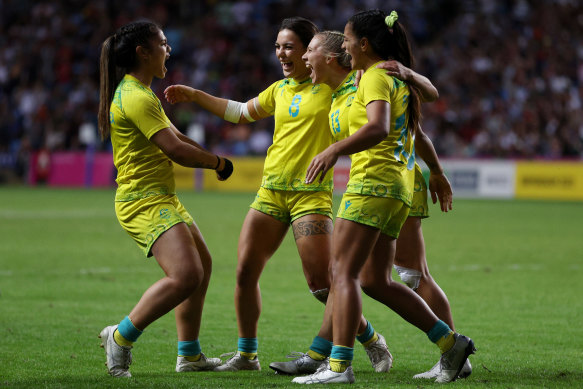 The win was Australia’s first rugby sevens gold medal at the Commonwealth Games.Credit:Getty

The historic achievement of Manenti’s men came after the program was cut back drastically in size, with only eight contracted players and others plucked from club ranks and fringe Super Rugby squads. It was a throwback to the former structure of Aussie sevens and the fresh, aspirational energy perfectly complemented veterans like skipper Nick Malouf. Stars like Corey Toole emerged.

“It’s been a great year seeing some young guys take their opportunity. The basis of what we have been able to do this year has been just on hard work,” Malouf said. “It’s been a great year to be able to look back at where we started and where we are now. But we really want to make sure we top off with a great result here (at the World Cup).”

Australia’s Olympic champion women’s team finished third in the women’s World Cup in 2018; unable to match the victory of the 2009 Aussie team.

“For our girls, we are not going to have any excuses,” skipper Charlotte Caslick said.

“We are not going to go away from this tournament and say ‘well, we are world champions or Commonwealth Games champions’ we want to have all three of those medals.”

Australia’s women begin their campaign against Madagascar on Friday evening (8.11pm), and the men’s team play the winner of Hong Kong v Uruguay a few hours later. Under a new knockout format, the tournament then goes straight to quarter-finals.

Watch every match of The Rugby Championship on the Home of Rugby, Stan Sport. All matches streaming ad-free, live and on demand on Stan Sport.