Melbourne Storm lock Dale Finucane knew he would see some unusual things on his trip home to Bega following the devastating summer bushfires, but the sight of Fijian prop Tui Kamikamica pulling out fence posts with his bare hands was not one of them.

Finucane was joined by teammates Ryan Papenhuyzen, Aaron Pene and Kamikamica for a weekend trip to Bega and the surrounding area in late February, with the Storm players helping to boost spirits, help out with some fence building, running a junior clinic and even making a last-minute entry in the local swimming competition. 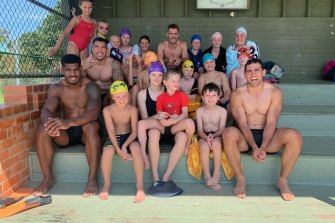 The Storm and NSW forward spent his Christmas break at home with his wife and family but was back in Melbourne for pre-season training by the time the conditions worsened and fires hit the region.

"No one was immediately affected in my family. When I came back to Bega over Christmas break, New Year's Day was the first hectic day I was aware of," Finucane said.

"We were lucky to get out before the brunt of it came and lucky our families and parents weren't directly affected."

The Storm players visited some of the towns hit by the fires in the Bega Valley, including Cobargo, while Finucane and his mates enjoyed helping out, fixing some fences with tour organiser Blaze Aid. 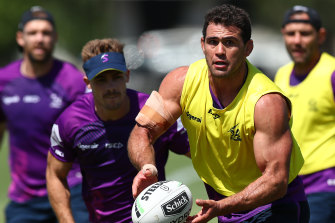 The Storm players had some struggles in picking up the finer points of fence building but Kamikamica took a hands-on approach.

"I was talking to one of my friends who is a farmer," Finucane said. "I said how much fencing we got done in an hour and my friend was a bit disappointed. We were learning and were quicker at the end.

"Tui was the star. He was pulling out the pickets with his hands, there was tool you were supposed to pull them out with but he was happy pulling them out of the ground."

Before he arrived in the region, Finucane was asked if the Storm players wanted to join the Cobargo Swim Relay and the four players ended up joining in the event which raised money for the local fire services.

Papenhuyzen won the Noa Jessop Splash for Cash which was raced in honour of a young boy who died after being hit by a car. Jessop was a passionate Storm fan.

Finucane said he and the players had loved the trip.

"One of the biggest things that struck me was the fact that after such a horrendous tragedy had happened but people still had high spirits," Finucane said.

"People who had lost their lives, possessions, houses still were so optimistic and thought everything would be OK. There is light at the end of the tunnel."

He and his Storm teammates are now getting set for the start of the new NRL season, with Melbourne starting their campaign away to Manly in round one next Sunday.