The NRL has confessed the Latrell Mitchell Aboriginal flag scene in the reimagined The Best campaign was not part of the original plan for the commercial.

And that will only anger South Sydney heavyweights, who are privately fuming that Mitchell is copping a new round of racial abuse as a result. 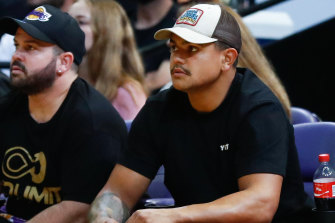 The NRL has told me that Mitchell’s original brief for the ad was to be at a beach in the south eastern suburbs of Sydney at 6am. He was asked by the NRL to wear what he wore to the Survival Day march, where he stood proudly with Josh Addo-Carr, Cody Walker, Joel Thompson, Dane Gagai and Adam Elliott.

Mitchell arrived for the NRL ad shoot wearing a black T-shirt with an Indigenous flag on it. This time he was marching to the tune of a camera crew and director, who the NRL say he knew and was comfortable with.

The crew were not happy with how the shoot was working out because of the light, and that’s when the flag was produced. The NRL have told me Mitchell had no issue with that.
Souths say otherwise.

They think Latrell was put in a position where he is left wearing the brunt of the criticism for the NRL’s ‘‘inclusive’’ ad.

Greenberg said ‘‘the game is right behind’’ Mitchell and that he was ‘‘disappointed by the backlash’’.
Greenberg did not give a direct answer when I asked if Mitchell knew that he was going to be such a big part of the campaign and in many ways the focus of the ad. The NRL say he won’t be as much a focus of the 30-second commercial that will be wheeled out during the season.

Mitchell’s agent, Matt Rose, said his client was happy with his role in the commercial and the way he was portrayed.

Fox may call games from studio

Last week we revealed that a player they had been grooming as a media talent for years, Cooper Cronk, did not have a deal days out from the start of the season. Fox have also let Brett Finch, Mark Gasnier and Graeme Hughes go.

We are now hearing more talent is on the way out the door and they are considering a significant change to the way games will be covered this season, which will save them a large amount of money, but may impact the quality of what they put to air.

On days when Channel 9, owners of this publication, cover NRL games – Thursday night, Friday night and Sunday afternoon – Fox Sports may no longer have a presence at the game; they are set to call matches from the studio. They may also go without sideline reporters, which may seem like a blessing for critics of the coverage, but post-match interviews are significant added value.

Fox have experienced commentators, so calling a game off a screen won’t be an issue. But they won’t have the luxury of talking to the pictures they have asked for – only what the Channel 9 experts are talking to. That will challenge them.

Fox Sports’ list of contracted current and former players has also been slashed significantly, including losing Daly Cherry-Evans and Moses Mbye, among others. Even big stars such as NSW, Australia and Roosters captain Boyd Cordner don’t have deals locked down for this season.

Fox spruiked Mitch Moses and James Tedesco as their playing talent at their launch. They also have James Graham and Benji Marshall on deals thought to be worth about $60,000. They will work hard for that money.

So where does that leave Cronk? Channel 9 still expects Cronk will sign with Fox and insiders claim he will be there.

Brett Finch contacted this column over suggestions that he lost his job with Fox because he has been unreliable or relapsed and asked to set the record straight. Finch has been through some difficult days in recent times, but when we talked he was calm and measured.

‘‘I really enjoyed my time at Fox and I get it if they want to go another way,’’ he said. ‘‘There have been some people who have been very good to me and I am grateful.’’

Finch doesn’t claim to be perfect. ‘‘Look, I have a cross to bear and my battle is daily – I just live with that,’’ he said. ‘‘But right now I am in a good place. I’m healthy.’’

In Finch’s eyes his honesty about his mental health battle has hurt him. ‘‘I sometimes think it was a mistake to come forward and admit that I had problems,’’ he said.

‘‘I feel like it can be, and has been, used against me. I came out and talked about my issues because I wanted to see if it helped people and if I made a difference to one person then that would make me happy.’’

There is considerable speculation that James Tedesco’s mind coach, Joe Wehbe, will explore the option of player management now that he has ended his relationship with the controversial player agent Isaac Moses.

Wehbe and Moses have settled their long-running legal battle with Moses forced to admit Wehbe was a 50:50 partner in their player management business.

Wehbe could represent the leading player in the game, Tedesco, as he has also split from Moses, who is one of the agents the NRL has put on notice. It will be intriguing to see if any of his other clients now try to leave.

The time is fast approaching when NRL boss Todd Greenberg needs to decide whether to walk away from the game on his terms or wait to be pushed. If the public and private attacks continue for another few weeks, Greenberg will change his mindset.

Right now, those who know him say he is up for a fight. He is working his contacts and connections on the Australian Rugby League Commission and bunkering down.

While Greenberg’s star is being dimmed by the arrival of ARLC chairman Peter V’landys, it’s hard to determine if V’landys has a genuine dislike, distrust or disrespect for Greenberg.

Trying to work out why the clubs don’t like Greenberg is easy. They believe that because the NRL made bigger profits than expected last year ($30 million), they should get more. But these are the same club bosses that were criticising the game a few years ago about having no assets, no money to invest and no balance sheet.

There is no question that V’landys is one of the few people who could do the CEO’s job, but he doesn’t want that position.

This time 12 months ago Greenberg was riding high, but with the ascension of V’landys, all the game’s big decisions had to be made by the ARLC, not Greenberg. He has a contract for the remainder of this year. V’landys doesn’t have to act in a rush.

Greenberg can make the call to leave during the year or wait to see if someone else is catapulted into the big job next year. At this point he has the support of the ARLC.