The Roosters are inching closer to securing Cronulla centre Josh Morris — but only if they pay a six-figure transfer fee and if the Sharks can keep Morris for the early rounds of the NRL season.

After weeks of negotiations and posturing in the media, Roosters chairman Nick Politis and Sharks counterpart Dino Mezzatesta are set to bring the matter to a head in coming days. 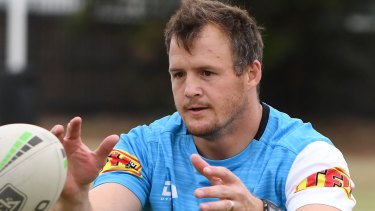 Josh Morris has asked for a release from the Sharks – but the club has refused to budge despite salary cap pressures.Credit:NRL Photos

The Sharks want a transfer fee after paying four months of Morris’ 2020 contract and this looms as the main sticking point between the two clubs.

The figure is believed to be about $100,000. Whether Politis is prepared to cough up that much is debatable.

The other condition of releasing Morris is that he must turn out for the Sharks in the early rounds — specifically until Matt Moylan recovers from calf and hamstring injuries.

Morris has been named at centre for the trial match against Manly at Netstrata Jubilee Stadium on Sunday night.

Indeed, both clubs have what the other wants.

Cronulla are under enormous pressure to move a player after the NRL slashed $350,000 off their salary cap for this season for repeated cap breaches dating back to 2013.

Ideally, they would like to move on the perennially injured Josh Dugan, who is on upwards of $900,000 a season, but no other club wants him.

They also have to complete their 30-man roster before June 30, so if they move any player on then they will have to sign another on the minimum wage of $75,000.

The club is also aware of the backlash they are set to feel from irate Sharks fans if Morris is squeezed out.

Meanwhile, the Roosters are desperate for a centre following the off-season departure of Latrell Mitchell and the season-ending ACL injury to Billy Smith.

Back-rower Angus Crichton has been turned into a makeshift centre, making his first appearance in the role in the Roosters’ World Club Challenge win over St Helens.

It was difficult for coach Trent Robinson to assess if Crichton will be a success in the role after Crichton was taken from the field during the second half at Totally Wicked Stadium with a head knock.

In telling comments at the Fox Sports season launch earlier this week, though, Roosters fullback James Tedesco said: “In his rugby union days he [Crichton] played a bit of centre but, to be honest, I think he was pretty keen to just lock down back row. He had a strong back-end to the year last year in the back row and he was keen to stay there but we don’t really have many other options.”

Morris and his management have been aggressively agitating for a release, with the former Kangaroos centre publicly declaring he wants to finish his career alongside twin brother Brett at the Roosters.

He is also disappointed that the Sharks enticed young centre Jesse Ramien back to the club from Newcastle, thereby pushing Morris out to an uncustomary role on the wing.

“They have to move a player no matter what,” Morris’ agent, David Riolo, told the Herald earlier this month. “It was the Sharks that told us to have a look around at the same time they said that to [prop] Matty Prior and a couple of other boys the same thing. Then they turn around and deny it. It's a bit of a slap in the face.”

Neither club wanted to comment on the negotiations when contacted late Friday.