Wales captain Alun Wyn Jones has called on World Rugby to review an incident during his side's 33-30 Six Nations defeat to England on Saturday when opposition prop Joe Marler appeared to grab him around the groin area.

Marler, who has a chequered disciplinary history, escaped sanction for the first-half incident during a melee that went unnoticed by the match officials. 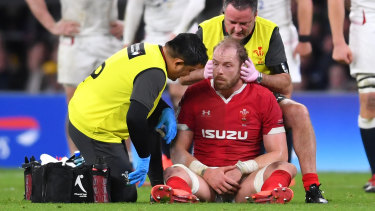 But it is likely to be looked at by the match citing commissioner, which could leave Marler in disciplinary trouble.

World Rugby's punishment for what they term "testicle grabbing or twisting or squeezing" ranges from a suspension of 12 weeks to 24 weeks or more.

"What would you do?" Jones said in a post-match media conference when asked about the incident.

"Hopefully World Rugby have a look at it.

"Joe's a good bloke, lots of things happen on a rugby field. It's difficult as a captain these days because you can't speak to a ref about anything, it feels.

"I look at the touch judge, obviously he didn't see what happened and that's fine.

"There's a lot of footage that has been shown, it seems like a lot of supporters saw what happened.

"It's very frustrating that we talk a lot about TMOs and footage reviews, yet there doesn't seem to be a lot of it happening."

The incident divided opinion on social media, with some fans describing it as sexual assault or harassment rather than a form of boys' own "banter". Others, however, saw the light side.

Jones was asked whether the incident should be taken lightly or treated as a more serious matter.

"I think it needs to be taken in the context of the game," he said.

"But with regards to the judicial panel that rugby has surrounding each game, as players – removing myself and Joe from this and the game itself – that's what we need to focus on.

"Not the incident or the individual."

Jones added that he shook hands with Marler after the game.