When Trent Merrin departed Penrith for Leeds despite having two years to run on his deal, then Panthers football manager Phil Gould declared: "We wish Trent well with his new challenge in the English Super League. Leeds has secured itself a very good man."

But it turns out Merrin, who had left his childhood club, St George Illawarra, for a fresh start at Penrith, was far from impressed about having to move on early so the Panthers could begin trying to tidy up their salary cap. 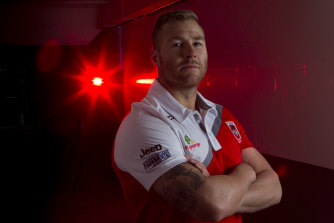 Trent Merrin is back in red and white.Credit:Christopher Chan

At one stage the Panthers were set to be close to $1 million over the cap for this year, and Merrin was one of the big names shuffled out the door well in advance.

"I didn't leave on my terms, it was a little bit toxic the way my career finished in the NRL [the first time around] and I felt a bit sour towards that," Merrin said.

"I learned a lot while I was away from the game in England, I love the NRL, I love the Dragons, it's my home and to get this opportunity to live that childhood dream again is something I jumped at."

Merrin will pull on the St George Illawarra jersey again in Saturday night's Charity Shield. It has been 1631 days since he last wore the Red V in a qualifying final against Canterbury.

While it was obvious Merrin was pumped to be back with the Dragons, it was just as clear he had not forgotten what happened at Penrith.

"I don’t really need to name names, but it was a weird ending there," Merrin said.

"I loved Penrith and I would’ve loved to stay until the end of my career – I loved the community and the playing group – but it wasn’t meant to be.

"I think I achieved a lot at the club, but there were things happening that wouldn’t let me stay to fulfil what I wanted to do. I got out for my own peace of mind, my own happiness.

"But it was always a dream to come back and finish on my own terms."

Merrin, 30, skipped last weekend's trial against Newcastle and is excited to run around at Mudgee against Souths.

Graham did not travel to Mudgee and has not seen any pre-season action but will be fit for round one against the Wests Tigers.