Out-of-favour big man Mason Cox is closing on a return to Collingwood’s senior team. When he does make a comeback, it will be as a ruckman first and foremost not a forward.

Cox is a strong chance to come back into the team as soon as this week as the Magpies manage the exposure of teenage ruck forward Aiden Begg in his first season. 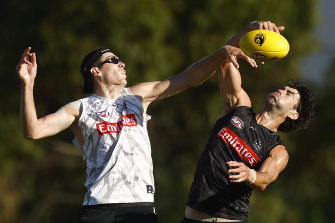 Cox, who was dropped after losing all semblance of form in a loss to the Brisbane Lions at the Gabba in round five, has gone back to the VFL and played as first ruck and found some form. Last week he had 47 hit-outs, seven marks and 19 disposals.

The coaches left him in the VFL even after Brodie Grundy injured a PCL, which has sidelined him at length. With Grundy out, coach Craig McRae chose to give Begg his debut and leave Cox in the VFL.

McRae had said prior to the Grundy injury he had mapped out a plan with Cox to find form in the VFL. That plan involved him playing ruck , a position that some in football consider a better fit than key forward for a player who only took up the game in his 20s.

Collingwood sources said that it was unrealistic to think a young ruckman such as Begg in his first season could play 15 or so uninterrupted games in his first year, so it was inevitable Cox would come in again soon and give Begg a rest after a string of three or four games. 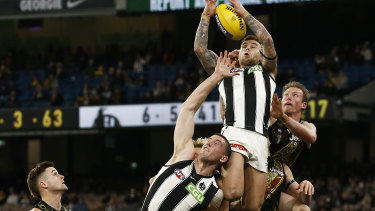 Collingwood is likely to bring Jamie Elliott back into the team to play Fremantle in Perth on Sunday night. While it is not completely ticked off, he is expected to be clear to play after overcoming a shoulder injury and building aerobic fitness in recent weeks.

Captain Scott Pendlebury and small forward Jack Ginnivan, who missed last match with illness, are likely to come into the team.

Defender Jack Madgen will be out at length after injuring his shoulder in the loss to the Bulldogs.

Veteran wingman Steele Sidebottom did not train on Tuesday, reportedly suffering the flu that has gone through the club in recent weeks, and therefore must be in some doubt for Sunday.