Wayward goalkicking has cost the Queensland Reds dearly in a 24-20 loss to the Crusaders after threatening to halt one of the great Super Rugby streaks.

Accuracy off the tee proved the difference in Christchurch on Friday, with the understrength visitors enjoying the better of play and out-scoring the Crusaders four tries to three. 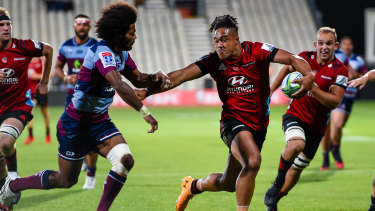 Leicester Faingaanuku of the Crusaders fends off Henry Speight of the Reds during their Super Rugby clash in Christchurch.Credit:John Davidson/Photosport NZ/AAP

Richie Mo'unga slotted all of his four shots at goal for the winners while Reds goalkickers Jock Campbell, Scott Malolua and Bryce Hegarty combined to miss all four kickable conversions.

It left the Crusaders able to cling on and extend their competition-record home unbeaten run to 34 successive games.

Led by storming performances from forwards Lukhan Salakaia-Loto, Harry Wilson and Taniela Tupou, the Reds had the better of the physical exchanges and looked well capable of lodging a first win in Christchurch since 1999.

Making their performance all the more remarkable was the absence of experienced trio James O'Connor, Tate McDermott and Izack Rodda, forcing Brad Thorn to field a very inexperienced side.

They more than matched the three-time defending champions in the first half, turning at 10-10 – boosted by tries to Chris Feauai-Sautia and Wilson – and with the hosts reduced to 14 men after Tom Sanders was shown a yellow card.

However, Tupou burrowed over before winger Henry Speight finished off a contender for team try of the year, completing a sweeping team move set up by a Wilson bust.

A fifth loss from six games leaves the Reds with a mission to make the finals while the Crusaders made it four wins from five.