Dennis Ward, the clever Australian halfback who was pivotal in the “greatest try never awarded”, has died aged 77.

In the 1972 World Cup final against Great Britain in Lyon, France, Ward launched a perfect parabola of a kick. It was caught in mid-air by Kangaroo captain and fullback, Graeme Langlands, who forced the ball over the try line. However, the French referee, Georges Jameau, disallowed the try, believing Langlands could not possibly have been onside. 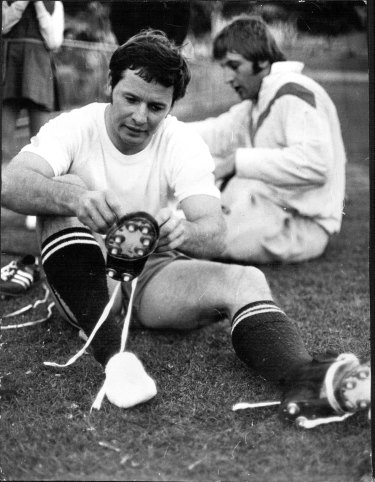 Dennis Ward at training at Brookvale Oval during his Manly days.Credit:Fairfax Media

TV replays determined the try was legitimate, but this was before the era of the video referee and reviews. The match ended in a 10-all draw after extra time and Great Britain were deemed winners by virtue of a superior position on the tournament points table.

Still, 1972 was a good year for Ward, who was named Man of the Match in the grand final when his Manly team won its first premiership. Ward was also involved in another unheralded record when chosen in the Australian team for a 1969 tour of New Zealand, making him the first Canterbury junior to represent his country.

Captain coach of Wests, Newcastle, he was selected on the 1973 Kangaroo tour, the first player to be chosen directly from the club to tour Great Britain and France.

Ward moved to Queensland, playing for Wynnum-Manly, and later became coaching director of the QRL. Nicknamed “Webby” because his colleagues joked that he had “swallowed the Websters Dictionary”, he was a keen student of rugby league theory. 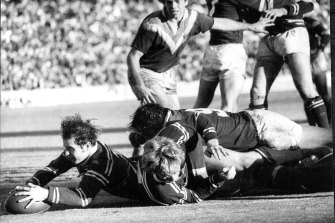 Dennis Ward touches down for a try for Manly against Easts in 1972.Credit:Fairfax Media

But he demonstrated that no theory is valid unless it works in practice and tweaked the rules of junior rugby league in Queensland to allow halfbacks to run more with the ball. Many believe the Maroons’ outstanding line of No 7s dated from this rule change, while halfbacks in NSW grew up playing a modified game where a first receiver caught with the ball was forced to surrender possession.

“Webby’s” greatest wish was for rugby league to evolve into an 11-man game. He argued that as athletes are breaking records in all sports as they grow bigger and stronger, why should rugby league be restricted to 13 men on a field which has not changed size in over a century?

Ward died in a Gold Coast hospital on Saturday after a long battle with stomach cancer. He is survived by wife Cheryl, daughter Justine, sons Matthew and Benjamin. Significantly, the much-loved No.7 had seven grandchildren.