Western Bulldogs' president Peter Gordon described the business case for a standalone team in Tasmania as "sound" when he appeared before the Legislative Council select committee inquiry into AFL in Tasmania in Hobart on Tuesday.

The veteran club president accepted the committee's request on the basis that all 18 presidents were being invited to the hearing and said it was possible for an extra team to be added to the AFL.

He said the club's numbers which suggested they would need to create about $46 million revenue per year was sound and it was reasonable for them to expect an AFL grant of around $17 million per year for a fledgling club. 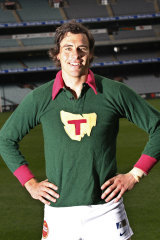 Gordon said the national competition was an unfulfilled aspiration without teams from Tasmania and the Northern Territory and challenged the AFL Commission to look at least as closely at potential expansion opportunities within Australia as international opportunities.

"It seems to me we ought to be brave about having [the AFL] reflect Australia and regions of Australia and at least equally interested in finishing that job [of creating a national competition] as being focused on international expansion," Gordon said.

Former AFL chief executive Andrew Demetriou and respected economist Saul Eslake also appeared at the inquiry with Demetriou telling the inquiry he thought it was too early for a new stadium to be built in Hobart to house a new team and a potential club should focus on improving existing infrastructure that ensured a new team played to packed houses.

Gordon, who saved the Western Bulldogs from extinction in 1990 and led them to their drought-breaking 2016 premiership, said those wanting to create a new club not only needed to outline exactly how they would convert Tasmanians who were AFL members into being financial supporters of a standalone club but also look beyond the average member for support.

"Every club have coteries and every club has high net worth people that are really essential to the recurrent financial support and operations of the club," Gordon said.

"They need to work on producing a culture of people who do that as well."

He also said those backing the bid needed to avoid framing an argument that Tasmania was more entitled to a team than the Suns, a club which AFL chief executive Gill McLachlan backed last week to be a long-term proposition, or that nine teams in Melbourne was too many.

"It's highly regrettable that this debate has become a battle between whether the Gold Coast Suns should be a club instead of Tasmania … and whether there are too many clubs in Melbourne," Gordon said.

"It seems to me that was a divisive argument that didn't do anyone any good."

McLachlan met with Tasmanian premier Peter Gutwein and Taskforce chair Brett Godfrey a fortnight ago with the AFL seeking clarification on some of the points made in the report. The Tasmanian government is keen to put their case to the commission.