Victoria made sure they protected the state’s reputation with nine unanswered goals in the last quarter of the bushfire relief match at Marvel Stadium on Friday night to defeat the All-Stars by 46 points.

It wasn’t about the result, however, as the game’s biggest stars put on the boots to raise money for bushfire-affected areas with the AFL community starting the ball rolling when they chipped in $2.5 million in January. 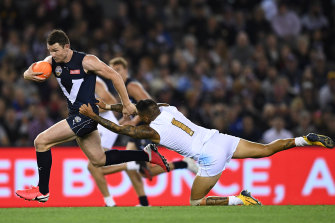 The line-ups were a football fantasy aficionados’ dream with stars such as Dustin Martin, Patrick Dangerfield, Nat Fyfe, Marcus Bontempelli, Patrick Cripps and Josh Kelly enough to draw a packed house to Marvel Stadium to see the Big V worn for the first time in nearly 12 years.

Pre-game the Victorians had been delivered a personal letter from a former star of Victorian football with Martin getting some words of encouragement from the game’s greatest player Leigh Matthews, a nice touch from the Victorian and Richmond coach Damien Hardwick designed to get the players in the right frame of mind for the match.

They certainly honoured the occasion, delivering a slick match played in the spirit of an exhibition, albeit a long way from the sort of intensity that made state-of-origin such a revered concept in the 1980s when Victoria, South Australia and Western Australia played some of the best games of Australian football seen.

When a Mexican wave went around the ground during the third quarter it was clear the crowd were more concerned with having fun than which team won.

Martin – not the big Lions and Victorian ruckman Stefan but that premiership Tiger Dustin – was the man everyone had come to see, the volume in the stadium peaking whenever the lad from Castlemaine in country Victoria went near the ball. 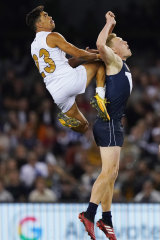 Charlie Cameron of the All-Stars flies high for a mark over James Sicily.Credit:AAP

The Richmond champion didn’t disappoint either, winning man of the match. He started in customary fashion, wrong-footing his hapless All-Stars opponent Brad Sheppard in the first quarter to keep the momentum that Gippsland boy and Sydney goalsneak Tom Papley had begun kicking Victoria’s first two goals from tight angles.

Given the region in which he was raised was a part of the state so badly affected by the fires around the new year period, Papley’s sharpshooting was fitting for the occasion.

But the All-Stars were not going to be mere props for the Victorians’ ambitions, sneaking out to a lead early in the match and stretching it to 30 points midway through the third quarter.

Callum Mills was doing his reputation no harm, regularly mopping up and if he held on to an attempted screamer over his Swans’ teammate Papley he would have given the game a highlight to remember.

Stephen Coniglio loved being back in action, having been sidelined since round 17, and he was excellent early while Patrick Cripps and Nat Fyfe were hard to overcome in the middle of the ground.

But the prospect of losing was not something the left-footed Victorian midfielders Scott Pendlebury and Josh Kelly appeared to relish and they began to impose themselves on the match, a booming torpedo by the Collingwood skipper from a centre clearance when the Victorians needed a spark important.

The Vics gradually hauled in the lead and then pulled clear with nine goals to nil in the final quarter to keep their pride alive with the Victorians undefeated in the two exhibitions played this century.