Ollie who? Rookie prop to make Wallabies debut as Beale named at fullback

The Wallabies’ worst fears have been confirmed with props Taniela Tupou and Allan Alaalatoa ruled out of the weekend’s clash against England due to concussion, leaving coach Dave Rennie with no option but to shift James Slipper to the tight-head side and debut a rookie who wasn’t even in the squad at the beginning of the week.

A nasty head clash in the loss to Scotland last weekend meant Tupou was little chance of playing against the English, but Alaalatoa’s scratching, despite passing a HIA and playing out the match, has left the Wallabies scrambling ahead of the biggest game of their northern tour. 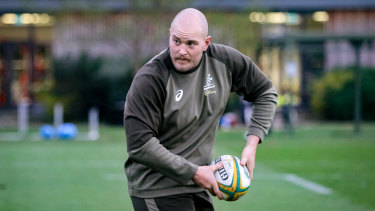 Hoskins has played more than 100 games for London Irish in the English Premiership and is now on the cusp of a maiden outing in a gold jersey.

“We’ve had a bit of a setback around tight-head, but we know Slips will bear up,” Rennie said. “We know what’s coming. It was based on need. Slips has got the most experience around tight-head. Tom Robertson has played a bit of tighthead. We prefer him as a loosehead.

“We played Sunday and they needed to be right [on] Monday. We planned if we lost one or both of them we needed a bit of cover, and so we bought Ollie in on Monday.”

The absence of Tupou in particular leaves a gaping hole in the Wallabies’ pack against an England side looking to make it eight wins on the trot against Australia – the team they dumped out of the 2019 World Cup quarter-finals.

Meanwhile, Jordan Petaia’s hamstring injury has prompted Rennie to tweak his back three and name Kurtley Beale at fullback instead of Andrew Kellaway, who will back shift to the wing where he has been so devastating this year.

It caps a remarkable return to the Wallabies starting XV for Beale, whose bench cameo in last week’s narrow loss and Test experience in the No.15 jersey convinced Rennie he was the best man for the job.

“We expect England to put a lot of ball in the air. Both Tom [Wright] and Kells are strong in the air and so is Kurtley,” Rennie said. “We felt those three in the back field would be perfect for what we expect. You’ve just got to deal with it. The mood in the group is really good. We’ve prepared well.”

Despite calls for Izaia Perese to start after a strong debut, the Waratahs utility back will bide his time again on the bench.

Rennie confirmed Petaia would take no further part in the tour, therefore missing next week’s final match of the year against Wales.

“It’s not real bad but he won’t recover in time,” Rennie said of Petaia.

Despite a below-par showing against Scotland, where Australia’s five-Test streak was ended, halfback Nic White and No.10 James O’Connor have been given the nod again, while Hunter Paisami and Len Ikitau will link up in the centres.

“I think James [O’Connor] was mixed last week … he’ll make the adjustments,” Rennie said. “It’s more around connection … making sure we’re connected to the forwards and the quality of communication coming from outside. I think we’ll be better for it.”

Rennie has resisted the temptation to start Will Skelton and will continue with last week’s starting second row pair of Rory Arnold and Izack Rodda.

“Happy with how Rodda has been going,” Rennie said. “We have a vigorous discussion around selection and we think Will’s best value is off the bench.”

It will be 757 days since the Wallabies were thumped 40-16 by England at the World Cup, which was Michael Cheika’s last match in charge. Eight of 23 players who featured in that fixture will run out at Twickenham with revenge on their mind.