Home » Rugby » New deal with Tigers on the way for Gale

New deal with Tigers on the way for Gale

Brendon Gale’s term as chief executive is set to be extended at Richmond with a new three-year deal.

Richmond president Peggy O’Neal told The Age on Friday that Gale would continue as the Tigers’ chief executive, a role he has held since August 2009. 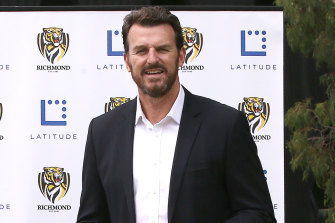 “Brendon has indicated he’s going to continue, so I’m finishing up his contract now,” she said.

O’Neal says it’s been quite a journey at Richmond for Gale, who played for the club from 1990 to 2001 as a centre half-forward and ruckman.

“The first couple of years I remember when he was CEO, he just looked terrified the entire time because we were just in such bad shape and he had a lot of things to do,” she says.

“It’s a big step up from the AFL Players’ Association because he went from that to becoming CEO of a club that needs a lot of work but he is very committed and he’s been a great leader for us.”