At every Wootton family birthday celebration, patriarch and great-grandfather Richard ends the traditional song with an enthusiastic, “And one for the Dees!” It’s pretty standard for the 89-year-old Melbourne supporter, who has made loyalty to the club a family trait spanning four generations.

“Everybody in the family has to barrack for the Demons. And, if they didn’t, they probably wouldn’t tell me,” he adds only half joking. 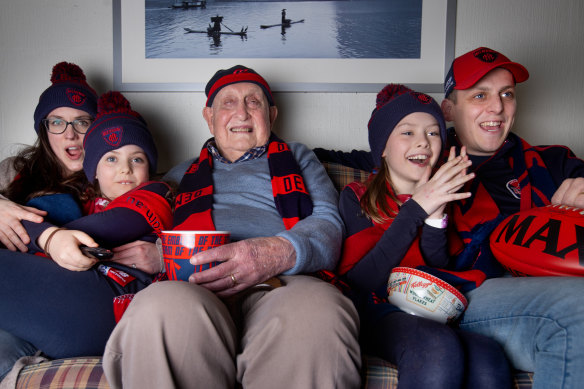 Wootton’s grandson, David Williamson, who spent his childhood attending Demons matches with his grandad, has inherited the zeal for the club from him and even calls his grandpa at every quarter of the match.

“When I was a kid, my grandpa would take me to games, and I remember sitting in the ’G watching us [Melbourne FC] get beaten most of the time,” he said. “Whether I’m at a game or not, I talk to grandpa at every quarter.”

Williamson is now a father, himself. He and wife Tegan, also a Demons supporter, have taken daughters Edie (10) and Amelie (eight) to most of Melbourne’s games this year.

“My girls have been signed up as members [since] before they were born,” he said. “They’ve had some 10.30 to 11pm finishes at the footy this year.”

Amelie, an avid AFLW fan, also has a special connection to Demons player, Daisy Pearce who was the family’s midwife in 2014. Last year, the young fan was reunited with her at the Demons’ preliminary final.

“I like that she [Daisy] plays AFLW and she plays for Demons,” Amelie said. “Grandpa says we will be very good in the AFLW,” she adds.

Williamson attended last week’s match, where his team lost to the Sydney Swans, and hopes this Friday’s cut-throat semi-final against Brisbane will be more energetic from Demons fans.

“I was disappointed with the lack of energy from the Melbourne supporters last week. We didn’t bring the energy required to support the team, it was coming from nerves,” he said.

However, Williamson said there is a silver lining in Melbourne’s performance since the beginning of the pandemic. “Teams have to develop strategies to beat us which is a positive. In the past people didn’t even think twice about us,” he said.

Like many other Demons fans, Williamson is still frustrated that he never got to cheer his team on during their historic premiership win last year. He attended the club’s premiership celebration last December with his grandad and was able to hold the cup.

“It was the first time he’d been to the MCG in 10 years. When he held the cup, a tear rolled down his cheek – it meant so much to him,” Williamson said.

Wootton turns 90 this year, and a win on Friday night could see him witness the same kind of Demons glory he did decades ago.