Dino Mezzatesta has taken over as Cronulla’s group chief executive as the club considers releasing Josh Morris as part of a player swap with the Roosters.

The Sharks have been looking for a third CEO in 12 months since the departure of Richard Munro in January. They haven’t had to look far for a replacement, opting for chairman Mezzatesta to fill the void. Steve Mace will be the new chairman. 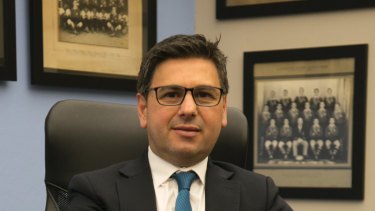 Dino Mezzatesta is set to become the new Sharks CEO.

Injuries and speculation about the futures of Morris and Dugan have disrupted the Sharks’ pre-season. However, skipper Wade Graham believes his team can remain a premiership contender.

“We just get on with it at the Sharkies,” Graham said. “Most of the players have been through some adversity throughout their careers but we turn up to work and get on with it.

“The boys have been training hard, we’ve got a young squad and a really motivated squad. Our expectations haven’t changed from previous years – we expect to play finals footy and chase success, so we’ll be working hard for that.

“The way this group has trained in the pre-season, it’s the best I’ve seen for a while.

“So far so good, I couldn’t be more pleased with our training. Now it comes time to put all of that practice into playing.”

Cronulla coach John Morris said he was undecided whether Jack Williams or Billy Magoulias would earn the right to take Gallen’s spot for the opening game against South Sydney.

“Gal set the standard with all that physicality and that gritty style of play,” Morris said.

“Between Jack and Billy, they've got those qualities in them to take on some of that and I'm really looking forward to them maintaining some of that grittiness that the Sharks' No.13 has had for the last 19 years.”