St George Illawarra coach Paul McGregor has revealed a plan to use coloured paddles as a possible avenue to challenge refereeing decisions this NRL season.

The Dragons became the first team to successfully use the captain's challenge after having two calls overturned in Saturday's pre-season loss to South Sydney.

Both challenges occurred either side of half-time in Mudgee, the first of which came after officials missed a knock-on from Latrell Mitchell. 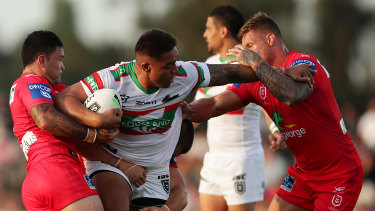 Junior Tatola of the Rabbitohs is tackled during the Charity Shield match at Glen Willow Sporting Complex.Credit:Getty

Their 100 per cent success rate was one of the few positives McGregor took out of their second-half fadeout against the Rabbitohs.

The Dragons showed plenty of ticker in defending their line on their way to claiming an eight-point halftime lead at Glen Willow Sports Complex.

But they were blown out in the second half before going down 26-12.

Having come close to winning the Nines tournament in Perth, as well as routing Newcastle in their other trial, McGregor refused to panic about the collapse. 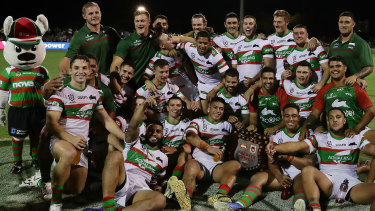 Rabbitohs players celebrate with the Charity Shield in Mudgee.Credit:Getty

"We obviously will work on that because it's not what you want to see in your final trial. But in saying that, there's a lot of things out there that we liked," he said.

"They had four repeat sets and they didn't come away with any points in that time. Souths are a pretty strong, physical side and score points.

"To defend that for long periods of time was a real positive."