Richmond chief executive Brendon Gale has given a glowing endorsement of Dustin Martin as a leader, declaring he could “absolutely” be the next Tigers captain.

Gale said there was no hurry to settle on a replacement for Trent Cotchin, who has stepped down, having led in a club-record 188 matches, including three premierships in the past four years. 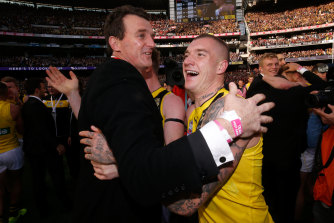 The Tigers say they have several strong candidates but Martin is by far the most high profile, should the Brownlow medallist want the role.

Gale said Martin, 30, was a “terrific leader” who was meticulous in his preparation.

“When Dustin came to the club, he had a few rough edges but a lot of 18, 19-year-olds do. With growth and maturity and responsibility, those edges are smoothed out,” Gale said.

“Dustin is an uber-professional. His preparation to get the best out of himself is inspiring, to be honest. He is a terrific leader and he has got a strong sense of who he is and really cares about his teammates and his club.

“They are all really strong leadership attributes and that’s something he really wanted to develop. I think, absolutely, he is more than capable to fill that role.”

As a three-time Norm Smith medallist, Martin’s on-field skills are not in question, nor his football nous, but the question facing the Tigers and Martin is whether he would want to be the frontman and regularly deal with sponsors and the media – an increasingly important part of the job.

Martin has traditionally been loath to conduct interviews but, conversely, this appears to have increased his advertising appeal under the guidance of celebrity and football manager Ralph Carr.

Tigers teammate Jack Riewoldt has said Martin would be a good captain “with the right team around him”.

“We aren’t in a hurry. We have got a process … in place and we will work through that. I think the depth gives us the ability to make a really strong decision,” Gale said.

St Kilda great Nick Riewoldt has been a vocal advocate of Martin being handed the captaincy, declaring how impressed he had been with Martin at quarter-time and three-quarter-time in a practice match last year when he had been assertive, demanding, supportive and articulate when addressing teammates.

Martin was left with a lacerated kidney after a collision against the Brisbane Lions in July. His season was prematurely ended and he ultimately lost about 10 kilograms as he was put on a diet predominantly of fruit after surgery.

The 260-game veteran has resumed eating more substantial foods and has been seen running at Punt Rd, prompting Martin to recently declare he felt “better than he has ever been”.

Gale said Martin, listed at 93 kilograms, may opt to not put all the lost weight back on, for this could help him spend more time in the midfield in a season when the Tigers are determined to rebound from missing the finals and return to a premiership threat.

“He is going well. He lost a lot of weight by virtue of his diet after his kidney injury but he looks really, really fit,” Gale said.

“He may choose to keep a bit of that weight off because he is just naturally strong and powerful. It might increase his running power, his transition running, maybe more midfield time. He is just so driven. He is really, really hungry.

“Our guys have had a long break, they are going to be fully rested and they are very, very focused on 2022.”

Gale said coach Damien Hardwick had been poring over data in the off-season “trying to get a sense of why we didn’t perform as well last year”.

“We have got a handle on that. The next part is how we are going to change and respond. But he has got a real thirst for knowledge and improvement, he is extremely driven,” Gale said.

“Like the players, he will be rested and very driven for success going forward.”

Poor form, injuries and fatigue caught up with the Tigers last season but the addition of former North Melbourne defender Robbie Tarrant and a healed ruck combination of Ivan Soldo and Toby Nankervis will give the team a major lift.