Letters from past greats inspire Victoria to win over All-Stars

A letter from Tiger great Kevin Sheedy that encouraged him to seize the opportunity to captain Victoria inspired Richmond premiership captain Trent Cotchin before he led the Big V into battle at Marvel Stadium on Friday night.

The dual premiership skipper and Brownlow medallist said Damien Hardwick's idea to get some of the state's champions from the past to send notes to each of the players selected to represent Victoria was a nice touch typical of the Richmond and Victorian coach. 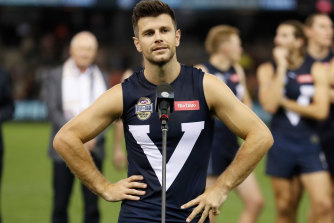 Trent Cotchin thanks the crowd after the bushfire relief match.Credit:Getty Images

Collingwood wingman Steele Sidebottom could hardly believe he had a letter from the flying doormat Bruce Doull waiting for him after the team meeting, saying he hoped he could communicate to the famously reclusive Blues champion how much his words meant to him.

The Magpies' premiership player said he was nervous when he arrived to join his teammates but the experience was better than he had hoped.

North Melbourne's Shaun Higgins read words from former Cats' wingman Mick Turner which he said carried special resonance because he had known him since he was a three-year-old when his dad coached Newtown, while West Coast's Andrew Gaff received a note from Hawthorn hard man Robert Dipierdomenico who played for the same junior club as Gaff, the Kew Comets.

The Tigers skipper said the pace was unbelievably hot early as he worked his way into the game with 21 touches in a typically polished display. Although Cotchin enjoyed the match, he didn't forget where his loyalties lay when describing the experience of playing alongside this generation's best players.

"There were so many special bits of play because of the talent out there and as much as I loved playing with this bunch of guys I get a pretty big thrill playing for the Tiges with my bunch of boys every weekend as well," Cotchin said.

Once again he played a low-key role with box office star Dustin Martin, who received a letter from the player of the 20th century Leigh Matthews, thrilling the crowd and earning another best-on-ground medal. None of what Martin did surprised his skipper.

"He can do some pretty special things and has just another award to add the cabinet," Cotchin said.

"It's a pretty handy cabinet these days and I know that he will just enjoy the moment. Contributing to the cause was the most important thing for him."