Johnny Sexton stylishly celebrated his 100th cap with a second-half try as Ireland launched their autumn campaign with a crushing 60-5 win over Japan.

Andy Farrell’s men were in dominant mood in Dublin and warmed up for next weekend’s showdown against New Zealand by producing some scintillating, free-flowing rugby.

Captain Sexton marked his milestone appearance by claiming the fifth of nine scores at a below-capacity Aviva Stadium, in addition to slotting 11 points with his boot. 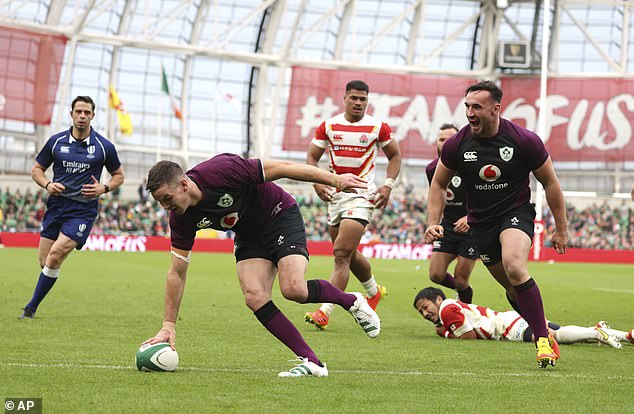 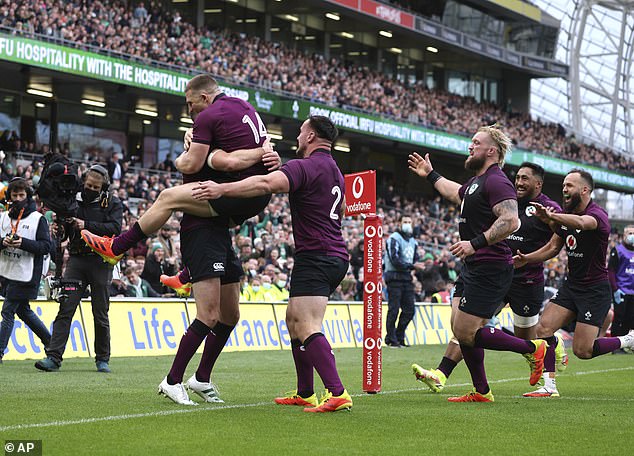 There was also a hat-trick for Andrew Conway, while James Lowe, Jamison Gibson-Park, midfield duo Bundee Aki and Garry Ringrose, and replacement prop Cian Healy were also on the scoresheet for the commanding hosts.

Japan’s consolation came from Siosaia Fifita but they were outclassed and powerless to prevent the Irish stretching their winning streak to six successive games.

Sexton became only the seventh Irishman to reach a century of appearances – following Brian O’Driscoll, Ronan O’Gara, Rory Best, Paul O’Connell, John Hayes and current team-mate Healy – and was afforded a standing ovation ahead of kick-off.

Any negativity regarding the swathes of empty seats and Ireland’s decision to ditch their traditional green jerseys in favour of a purple alternative swiftly dissipated in a spellbinding opening quarter. 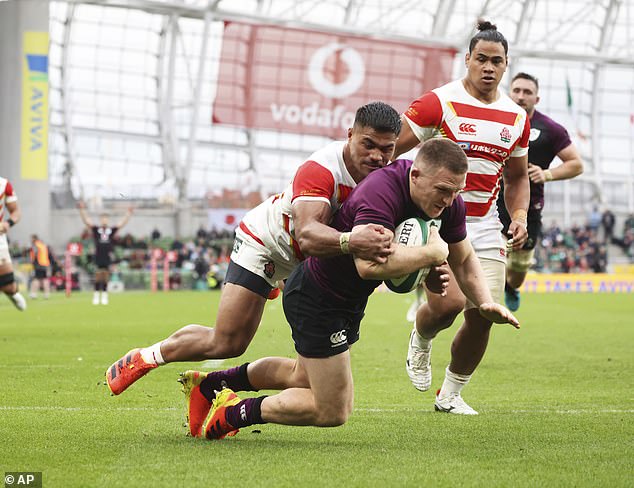 New Zealand-born Lowe – recalled after being dropped for March’s Guinness Six Nations win over England – set the ball rolling by diving over in the left corner just four minutes in.

Scrum-half Gibson-Park, another native Kiwi, played a pivotal role in the opener and he was also instrumental in the second.

The hosts gained serious ground with a series of neat offloads, before their number nine – starting ahead of Conor Murray – produced a delightful, defence-splitting kick to give Conway a straightforward finish in the corner.

Munster man Conway was one of only three non-Leinster players in the Irish line-up.

He stretched the scoreboard further with only 19 minutes on the clock, benefiting from a quick cross-field ball following a rolling maul on the left to once again charge over out wide.

Japan, beaten narrowly on this ground by an experimental Ireland side in early July, had shocked the hosts in the pool stage of the 2019 World Cup. 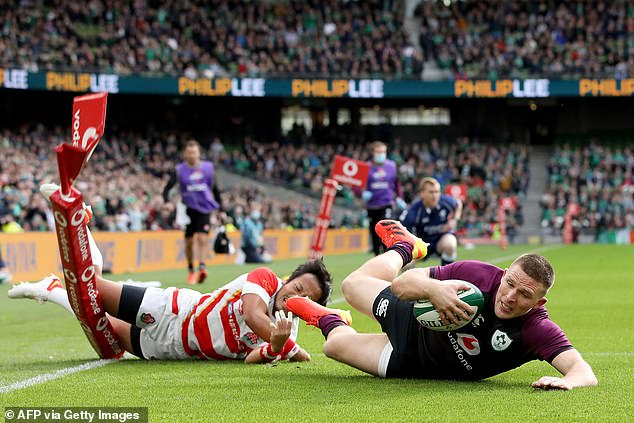 Playing only a fourth fixture since that home tournament due to the coronavirus pandemic, Jamie Joseph’s men never looked likely to spring another surprise and struggled to break out of their own 22 for the duration of a one-sided opening period.

After a simple Sexton penalty in front of the posts, Ireland took further control as Gibson-Park claimed his maiden Ireland try seven minutes before the break having latched on to a Ringrose pass.

A difficult first 40 minutes for the Brave Blossoms was compounded by hooker Atsushi Sakate being sin-binned in added time for repeated infringements.

Ireland continued on the front foot after the restart and 36-year-old Sexton once again brought spectators to their feet.

The influential talisman burst on to a Gibson-Park offload to find a gap in the Japan defence and touch down, before being mobbed by team-mates and then regaining his composure to slot the extras.

Things were quickly becoming embarrassing for the Brave Blossoms as Aki went over in the 55th minute. 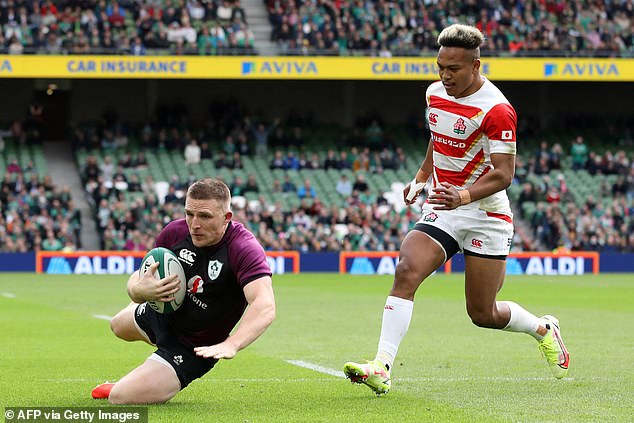 Sexton was given a rapturous reception when he was rested in favour of understudy Joey Carbery 18 minutes from time.

The replacement 10 successfully converted after Ringrose bulldozed over, before Conway continued the rout by completing his treble six minutes from time with his 13th international try.

Substitute Healy had the final say by powering over under the posts at the death, with Carbery’s second conversion completing the scoring.

Head coach Farrell could not have wished for much more from his side’s opening match of the month but they will face a far more serious test with the All Blacks in town next Saturday, followed by Argentina the following weekend.