Wallabies centre Hunter Paisami has re-signed with Queensland and Australia through until the next World Cup in a major boost to Dave Rennie’s 2022 campaign.

With Rennie and Rugby Australia still processing the fallout from this year’s messy Giteau Law experiment, Paisami’s commitment means the Reds enforcer will be on hand when the Wallabies welcome England for three Tests in July. 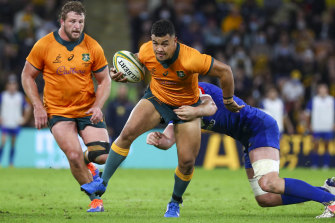 Australia’s Hunter Paisami has re-signed with Rugby Australia until after the 2023 World Cup.Credit:AP

Other key Test targets are still in play, including Brumbies prop and Wallabies captain James Slipper and France-based second rower Rory Arnold, who is in talks to return to Canberra.

But Queensland are shoring up their big guns for the next two years. Paisami, 23, joins James O’Connor, Taniela Tupou, Filipo Daugunu, Tate McDermott, Fraser McReight and Harry Wilson at Ballymore for the forseeable future.

“It’s an honour to have re-signed with the Reds and Australian rugby,” Paisami said. “I’m really excited to be a part of the future of both Queensland and the Wallabies and believe there’s a lot of improvement left in my game. I’ve really enjoyed my time in Queensland so far and I’m really happy to stay here with my young family for at least the next two years.” 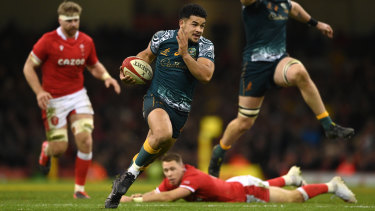 Paisami has been a beneficiary of former Reds and Wallabies centre Samu Kerevi’s move overseas, claiming his spot in Dave Rennie’s Test line-up in 2020 when Kerevi was playing in Japan.

He has gone on to feature in 15 of the 20 Test line-ups Rennie has named over the past two seasons, making way for Kerevi during the Rugby Championship, but reclaiming his spot in the midfield against Japan and in Europe last month.

In only his second season of professional rugby, Paisami has built a reputation for brutal defensive hits and a strong ball-carrying game.

It is not yet known what the Test eligibility criteria will be for offshore players such as Kerevi next year, so keeping together the Reds’ halves and midfield combination of McDermott, O’Connor and Paisami is a sound insurance policy for Rennie leading into a gruelling Test calendar.

“We’re really pleased that Hunter has re-committed to the Wallabies and to Queensland for at least the next two years,” the Wallabies coach said. “He’s a good young man with an impressive skill set who’s only going to improve and that’s really exciting for Reds and Wallabies supporters. His brutal defence and incisive carries were a feature on the end of year tour where he played his best footy in Wallaby gold.”

Meanwhile, the Queensland Rugby Union has weighed into the debate over Rugby Australia’s centralisation plans.

“Alignment for the QRU is working in partnership with RA to improve performance of the national teams as well as the Reds. Both men and women,” chairman Jeff Miller said. “It needs to provide an environment for growth, development and well-being of our coaches and players and be financially sustainable over the longer term. It also means support to our pathway programs to continue to generate players capable of playing professional rugby and ultimately for the Wallabies.”

While there is broad support for change to improve results on the field at Super Rugby and Test level it appears RA’s hopes for swift agreement and action are ambitious. Super Rugby officials indicated to the Herald a six-month time frame was more realistic, while chief executives and chairs of the two biggest unions had different views on what level of influence they were prepared to accept from Moore Park.

Queensland power brokers were sensitive to suggestions the state ‘warehouses’ its players, pointing out it was stated policy to have a minimum of 80 per cent of the Reds roster recruited from Queensland pathways. They also indicated the union would not support a plan that diluted the state’s control over coaching appointments.