How the Wallabies and England squads rate before Test opener

The Wallabies need to start their Test campaign with a win against England on Saturday.

You can take some of what Eddie Jones says with a pinch of salt, but he is right when he says Dave Rennie is under pressure.

The Wallabies need to be successful to bring fans back to the code. It’s a commercial imperative.

However, they face a significant challenge against a big England pack. Here are my head-to-head ratings – with a whisker separating their total scores.

Tom Banks. The safe choice for the No.15 jersey was finally coming into a bit of form in the Wallabies jersey before his untimely injury last year. But he is yet to deliver on the big stage. 6/10

Andrew Kellaway. One of the tidiest players in the country. Effectively sacrificed himself for the greater good at the Rebels this year, but a clever, resourceful player with multiple strings to his bow. 7 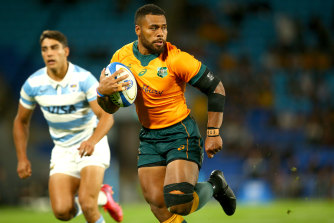 Len Ikitau. The talented Brumbies No. 13 dovetailed nicely with Samu Kerevi last year and the Wallabies will feel they have the edge in the midfield. 7

Samu Kerevi. Arguably the world’s best No 12, the blockbusting Fijian has grown his game considerably while in Japan. At the heart of Australia’s attacking plans. 9

Marika Koroibete. The busy winger gives the Wallabies some genuine potency on the left edge and his work rate close to the ruck will be critical if the forwards are struggling for front-foot ball. 8 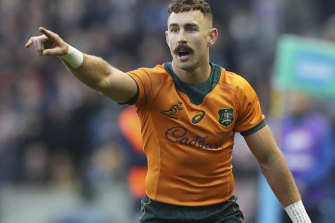 Quade Cooper. His transformation last year had to be seen to be believed – the question now is whether he can keep defying gravity at the grand old age of 34? Looks in great condition, but the step up from division 2 in Japan remains huge. 7.5

Nic White. England must really respect the Brumbies No.9 – why else would Eddie try and lay a trap for him in his pre-match comments about who really runs the Wallabies game plan? Can expect plenty of niggle. 7.5

Rob Valetini. Has grown into an outstanding all-round player. His match-up against Billy Vunipola could well be the pick of the head-to-heads. 8

Michael Hooper. The captain is at the top of his game and finally being recognised for what he offers Australian rugby. 8.5

Rob Leota. Was always going to start ahead of Harry Wilson once Jed Holloway went down injured. Lineout expertise vital against Courtney Lawes. 6.5

Cadeyrn Neville. A surprise debut at 33 years young, with Dan McKellar’s influence obvious. Form for the Brumbies was solid, but this is a different level. 6

Darcy Swain. Can he stop the intelligent and provocative Maro Itoje at lineout time? The Brumbies set-piece wizard showed against France last year that the big occasion does not faze him. 7

Dave Porecki. The Waratahs hooker deserved his selection but will be well aware that opposite Jamie George is one of the most underrated blokes going around. 6.5 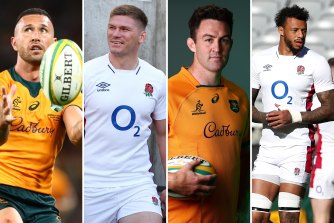 Freddie Steward. The giant Leicester custodian could be one of the players everyone is talking about after this series. Great under the high ball, with just enough pace to make those outside breaks. 7.5

Jack Nowell. Looks lighter and sharper than when he first arrived on the scene, and will be asked to perform a roving, Koroibete-style role. Reliable. 7

Joe Marchant. The Harlequins midfielder spent time in Super Rugby at the Blues, where he was also used on the wing. Not the biggest midfielder going around and will be targeted on defence. 6.5

Owen Farrell. The England super boot has been relieved of the captaincy to concentrate on his own game, and that will presumably spark a reaction. A crucial cog in the machinery, and as tough as they come. 8

Joe Cokanasiga. There has been plenty of hype about this bloke, although the Wallabies are well used to defending against power wingers in Super Rugby Pacific. Still largely unproven at Test level. 6.5

Marcus Smith. Electric feet, great acceleration and brave. The young No.10 is still developing his game though he will not be afraid to take on the line. But how much of a licence will he have with Farrell at No.12? 7.5 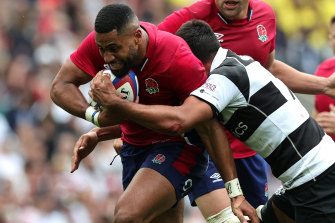 The highly-touted Joe Cokanasiga against the Barbarians last month.Credit:Getty

Danny Care. The veteran halfback still has quick feet but the Wallabies won’t be too sorry that Ben Youngs is not on this tour. England will play with pace in the right areas but Care will be judged by the quality of his kicking game. 7

Billy Vunipola. The powerhouse has fought his way back into Eddie’s good books and was outstanding in the recent English Premiership final. Doubts remain about his ability to go 80 minutes in Test rugby, but the brutal truth is the Wallabies would be better off with Battleship Billy left in the UK. 8

Tom Curry. The No 7 is a clever, tough and well-respected Test player. Powerful over the ball, his job will also be to stop Samu Kerevi if and when he targets Smith on defence. 8

Courtney Lawes. The captain has found a home for himself on the side of the scrum and his athleticism allows him to roam all over the field making an impact. Far more disciplined than his earlier days, he now knows when to go for the big hit and when it’s not worth it. 8 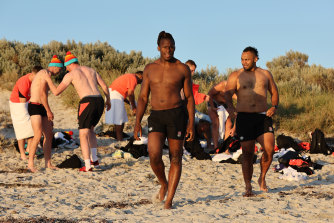 Maro Itoje is never far from the top of a list of world’s best players.Credit:Getty

Maro Itoje. World class. Always rates a mention in those difficult and entirely subjective ‘world’s best player’ lists. A real student of the lineout and a complete pest at the breakdown, where he doesn’t mind throwing out a few verbals. 9

Jonny Hill. Less well-known than most of the pack, he’ll do a lot of the thankless grunt work. Doesn’t have a lot of recent footy, however, so might be a touch underdone. 7

Will Stuart. The tight-head has been around for a while, but question marks remain in the absence of the injured Kyle Sinckler. Certainly doesn’t have Sinckler’s ability around the field but will target Bell at scrum time. 6.5

Jamie George. The barrel-chested hooker is exceptionally strong at the set-piece and has some subtle touches away from the scrum and lineout. Selection signals a real desire to take the Wallabies on up front. 7.5

Ellis Genge. Think of your archetypal English rugby player and then flip that upside down. Bristol-born Genge has had to fight for everything he has achieved and is in the mould of his Australian coach. Loves to carry the ball too. 7.5
Reserves: Luke Cowan-Dickie, Mako Vunipola, Joe Heyes, Ollie Chessum, Lewis Ludlam, Jack van Poortvliet, Guy Porter, Henry Arundell. 6

Watch every match of the July Test Series on the Home of Rugby, Stan Sport. Kicks off this weekend with Wallabies v England (Saturday 7.15pm AEST), All Blacks v Ireland (Saturday 4.30pm AEST), South Africa v Wales (Sunday 12.55am AEST) and Argentina v Scotland (Sunday 5.05am AEST). All streaming ad-free, live and on demand only on Stan Sport.