Hawthorn presidential candidate Andy Gowers says he was never made aware of the issues faced by Indigenous players that are the subject of an AFL investigation during Gowers’ stint as a board member responsible for football.

Gowers, who is seeking the presidency in a head-to-head election battle with vice president Peter Nankivell, vowed that he would “right any wrongs from the past” for Indigenous people at Hawthorn if he was elected to succeed Jeff Kennett. 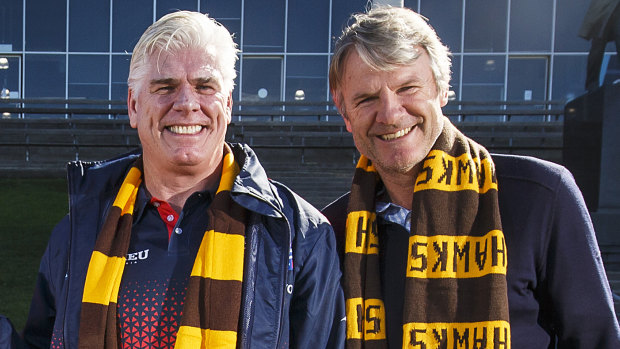 Gowers was on the club board from 2014 until late 2017 – a period that covers some of Hawthorn’s issues with the ex-players and their families that were uncovered in the cultural safety review authored by Phil Egan that has since become an AFL investigation.

The club president from late 2011 until early 2016, Andrew Newbold, has stood aside from the AFL commission while the investigation is ongoing.

But Gowers, a 1991 premiership player who served on Newbold’s board, said his experience had been that First Nations players had been treated with appropriate sensitivity.

“My experience when I was director of footy was that we cared and worked with our First Nations players and other people within the club in a really sensitive and appropriate way, full stop.”
Asked if was made aware of any of the issues that later surfaced in the Egan report, Gowers said: “The short answer is no I wasn’t.”

In his role as conduit between the club board and football department, Gowers said “you just don’t get close to those conversations or those matters, unless something is brewing and you need to be brought in.” He said none of these issues – several First Nations players from that period and their partners have made serious allegations against then coach Alastair Clarkson, his lieutenant (and now Brisbane Lions coach) Chris Fagan and then welfare manager Jason Burt – had been raised at board level.

Clarkson, Fagan and Burt have rejected the allegations and have committed to speaking to the AFL probe.

But Gowers saw it as his responsibility to repair past wrongs at Hawthorn, if elected president in December.

“Anyone who’s read the Egan report or heard the stories, like me, couldn’t help but be shattered by it and my heart goes out to everyone involved.

“I see it as my responsibility to right any wrongs from the past.”

If he became president, Gowers said he would adopt the Egan report’s recommendation that a full-time Indigenous general manager be hired.

“I endorse the recommendation from the Egan report that a full-time Indigenous general manager reporting directly to the CEO.”

Gowers said he wanted the best possible relationship with First Nations people, not only players, but “staff, members and supporters.”

Referring to the estrangement from the club of Cyril Rioli and his partner – the reporting of which led to Hawthorn’s cultural safety review – he said: “And I want the likes of Cyril to feel welcome and embraced.”

Gowers said the “independent process” of the AFL had to be respected and it was “every single person and every single person’s family in that situation, it’s really important that that process can run its course without any interference.”

The cultural safety review, while opening up allegations from the past, endorsed Hawthorn’s present day environment as safe for First Nations people. Asked if the Hawks had lost ground in Indigenous relations as a result of the review findings, Gowers said: “Has Hawthorn lost ground? I hope not, I absolutely hope not.”