Toby Greene and Josh Kelly had the Orange Army purring and left Adelaide feeling red-faced in a demolition job, which relieved some of the heat on Greater Western Sydney coach Leon Cameron.

The Giants looked nothing like the listless outfit mired in a three-match losing slump, smoking the Crows in all departments right from the opening bounce in a complete, clinical masterclass.

Greene sizzled with four first-half goals, near namesake Tom Green and Tim Taranto were bulls at the contest, Stephen Coniglio and Lachie Whitfield recovered their radars and Josh Kelly was unstoppable, especially after half-time. 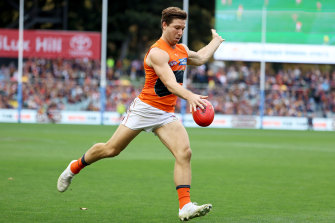 Toby Greene was back to his best against the Crows. Credit:Getty Images

Aside from the against-the-tide, two-way toils of Rory Laird and Bean Keays, the Giants could boast as many as 12 of the best players on the field before their opponents could be considered.

Following a week where the embattled Cameron’s future had been hotly debated, the Giants’ bounceback couldn’t have been any more timely or emphatic. 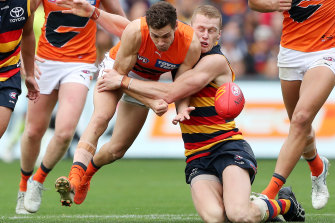 Greene, just serviceable in his first game back against St Kilda a week ago, set the scene for his big day out when he goaled inside the opening two minutes after leaping high over Billy Frampton and Jordon Butts for a spectacular mark.

Greene gave Luke Brown a bath early before being somewhat corralled when Adelaide switched Tom Doedee onto him. 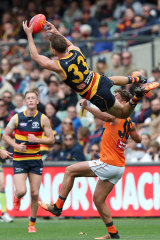 Brodie Smith was knocked out cold after taking this mark over Harry Perryman. Credit:Getty Images

The GWS genius nailed his fourth with a piece of typical wizardry, shaking off Lachlan Sholl at the fall of the ball and squeezing through a slender gap between Frampton and Jackson Hately before finishing expertly with his left boot.

Hogan had far too much for Frampton, who thudded back to earth with a forgettable afternoon after his career-best display against the Western Bulldogs last weekend.

Frampton and the other Crows back-men were opened up badly and were routinely devoid of options and exits. They were powerless to evacuate the ball out of their zone against the Giants’ impenetrable set-up behind the footy.

The GWS midfield was scintillating, their forward line multi-pronged and their defence doing all that was required on those odd occasions the football found its way down that end.
The prolific Kelly picked up 24 of his 41 disposals in the second half as the margin blew out to 79 points in the third stanza before Adelaide finished with some flourish, albeit far too late.

SPECTACULAR AND SICKENING
Acting Crows captain Brodie Smith soared high to snaffle a majestic mark over Harry Perryman on the members’ wing in the third term but was out cold a split-second later when his head slammed heavily into the Adelaide Oval turf on the way down.

Fox Footy commentator Kelli Underwood called the moment perfectly, describing it as “spectacular and sickening all in the one motion” as Smith was stretchered off the ground. 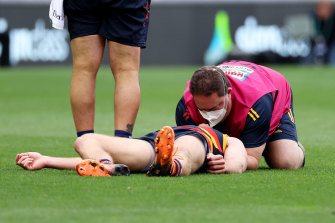 Smith’s injury continued a wretched recent run for Adelaide’s leaders after regular skipper Rory Sloane tore his ACL against Richmond a fortnight ago.

Later in the quarter against the Giants, Ned McHenry came off after being split above his right eye in a head-on collision with Green.

When the Crows hosted the Giants last year, they did so in round seven and armed with a promising 3-3 record.

The corresponding 2021 fixture ended in disaster for Adelaide, who suffered their worst defeat of the season, thumped by 67 points.

As insipid as the Crows were on that occasion, almost a year ago to the day, they were every bit as bad on Saturday, which had an eerily similar and acerbic smell about it.