Essendon too good but Jack Steven impressive for the Cats

Two contrasting styles met on Monday with Essendon's pace facing Geelong's pressure in the final lead-up before round one, with the Bombers' dominant third quarter allowing them to hang on to win the match by four points with the siren sounding just before Cats forward Brandan Parfitt flew for a mark inside 50.

After a dull first half that made Labour Day as fitting a description of the match as it was of the public holiday being enjoyed by the Colac locals, the Bombers' 3D midfield – Devon Smith, Dylan Shiel and Darcy Parish – took over after the long break, with Parish kicking three goals in the third quarter to break the game open. 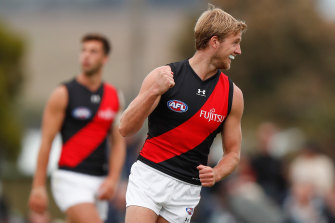 They were quicker and slicker in the third quarter, opening up the Cats who gave the Bombers too much space through the middle and on the open side when they won a ground ball in defence and ran it forward.

The Cats responded in the final quarter, lifting their pressure to make the game momentarily exciting with a final scoring flurry, pleasing assistant coach Matthew Knights.

"After the Gold Coast game we really looked at the way we competed around the ball and the way we used the ball and we looked to sharpen that up in the last week-and-a-half, and defensively we thought Gold Coast went through us a bit too easily at times, so keeping Essendon, a free-flowing outfit, to a pretty low score today was an improvement," he said.

The brightest feature for the Cats was the form of Jack Steven who jumped from the blocks in his first game with Geelong, collecting nine disposals and registering a goal assist by quarter-time.

He finished the game with 26 disposals and showed enough to give Geelong confidence he will fit in nicely alongside Cats star Patrick Dangerfield and emerging midfielder Quinton Narkle in the midfield after 11 seasons in St Kilda. 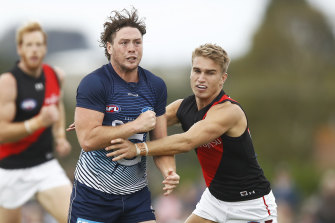 Jack Steven produced a promising display in his first game with Geelong.Credit:Getty Images

Not only was he good on the ground, he tackled hard and took a strong mark in the third quarter in an impressive start.

"He exceeded my expectations in the way he played. I thought his contest work was fierce. He used the ball nicely," Knights said.

Early in the game the Bombers lacked a key forward as they were without Jake Stringer, who pulled out from the match for personal reasons, and Irishman Conor McKenna, who made a slightly less hectic return in the curtain-raiser, where he showed being around the odd pint of Guinness back home had not robbed him of his customary pace. Gary Ablett was quiet but should be ready to go around for one last time when the ball bounces in round one.

Essendon assistant Blake Caracella praised the backline's performance and said they would find a way to score with a competitive group ahead of the ball. He confirmed that McKenna would step into the team in round one and Stringer would be available too.

"We are trying to work out which players are best suited in what roles in a slightly different system, and that takes time," Caracella said.

"We have played three games and we will probably shuffle the team around in the first half of the season to find our best team."

Veteran David Zaharakis did a corkie midway through the third quarter and had ice applied as he sat out the last quarter, while the Cats were without Tom Hawkins for most of the second half after he copped a knock – although they said post-match he was fine.

Sam Menegola sat out the second half with a corked quad.

With Cale Hooker out until at least round three, the 21-year-old Brandon Zerk-Thatcher has a chance to stake a claim for a defensive post alongside All-Australian Michael Hurley. And he looks up to it, completely blanketing champion forward Tom Hawkins, before the Cats goalkicker left the ground, in an impressive display that showed he is developing nicely. He is a good judge of mark and also knows how to hold his position to mop up. Caracella said the youngster was nearly best on ground. "I think he will be playing round one but I am not the coach," Caracella said.

Darcy Fort played the first half, with Rhys Stanley taking over after the long break in the ruck but neither player put their stamp on the position that has confounded the experts since 2011. Essendon's Andrew Phillips played the whole game but won the position despite facing a fresh Stanley in the second half. Neither player is a lock for the spot, with the Cats set to enter another season with the ruck a weakness.