To be continued. England’s Six Nations hopes are still alive but, like any good cliff-hanger, no one quite knows what will happen next.

Should France slip up in one of their two remaining games, England will have the chance to claim the title in Rome later this year, at a date which is yet to be decided.

Their campaign ended in a red mist – with Ellis Genge sin-binned and Manu Tuilagi sent off – but the damage was done during an early power surge. 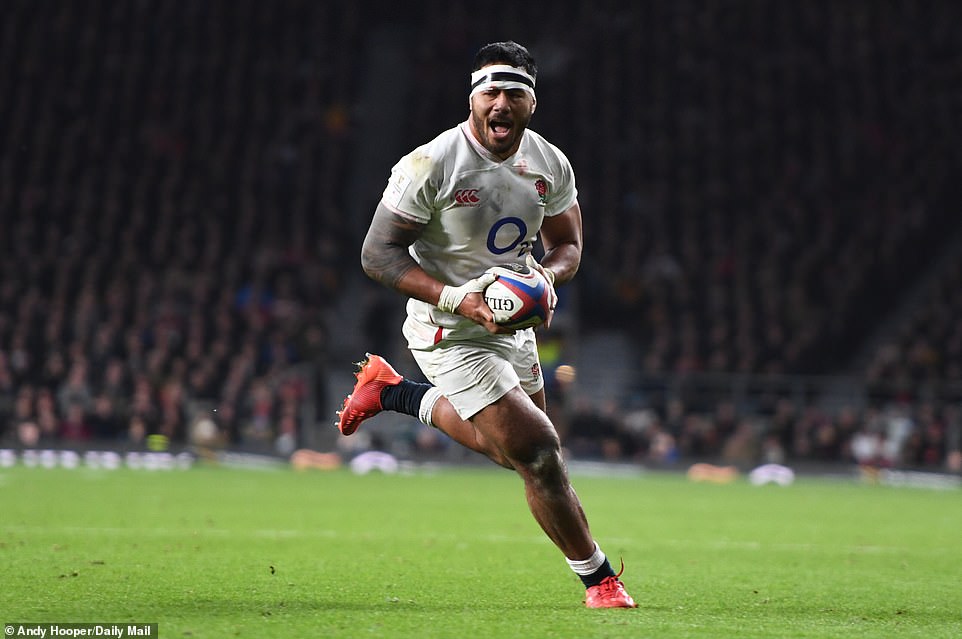 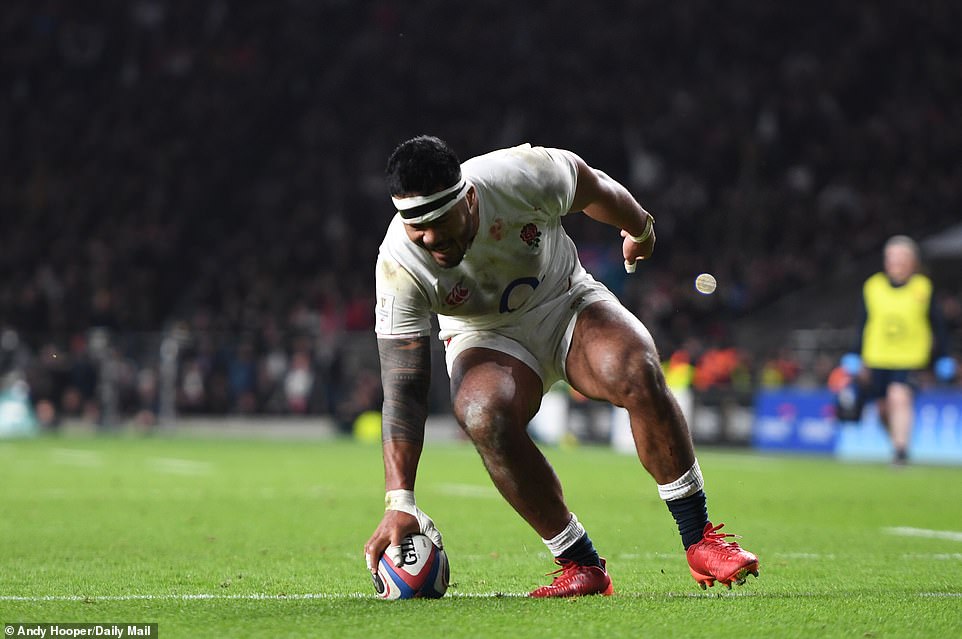 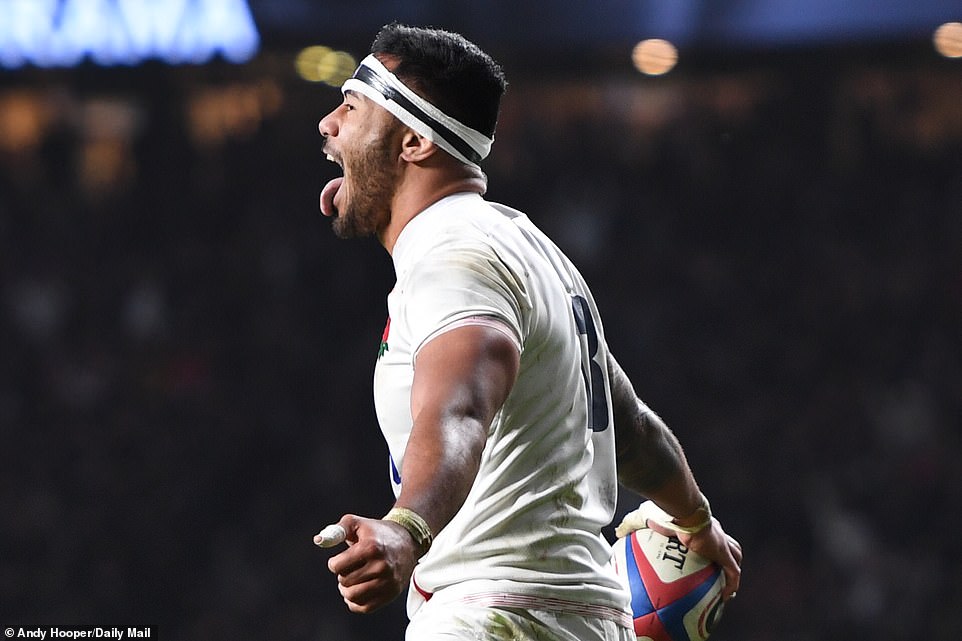 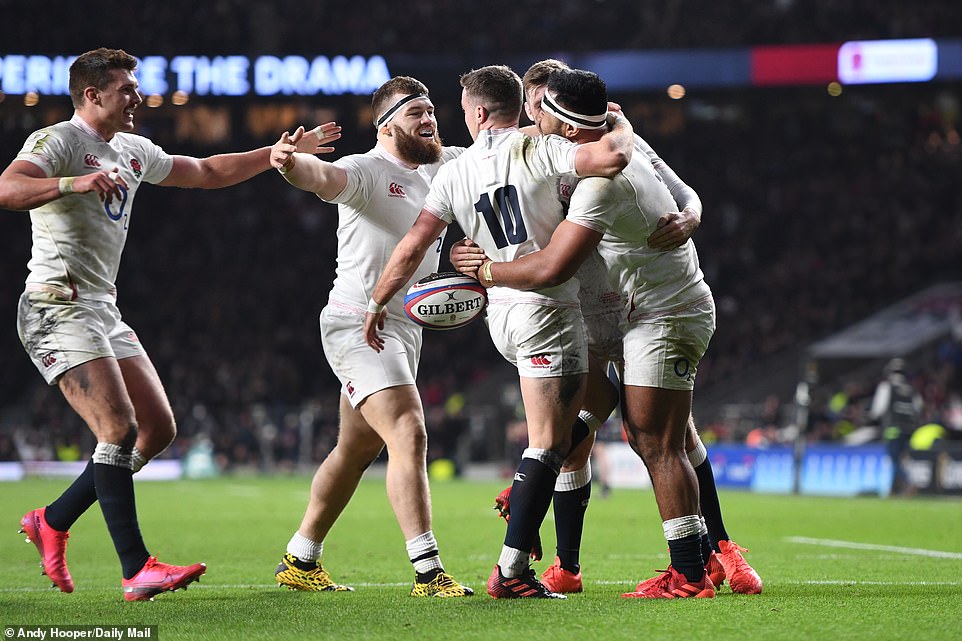 England were dominant for the most part, however Wales scored 21 points in the second-half to take the gloss off Eddie Jones’ evening.

Whether the likes of Ben Youngs, George Kruis and Joe Marler will still be around when England’s campaign resumes is still unknown, but they at least ended last night on a winning note.

The tweed army descended on West Car Park where they speculated how Coronavirus would affect their next skiing holiday. Some wore dust masks painted with the St George’s cross. Hand sanitiser was left out for public consumption. ‘Don’t pass it on,’ read the pump stations.

But any regard for personal safety was put to one side when Dan Biggar was smoked by Manu Tuilagi and Tom Curry in the opening minute.

England have talked up the importance of fast starts and they practised what they preach. 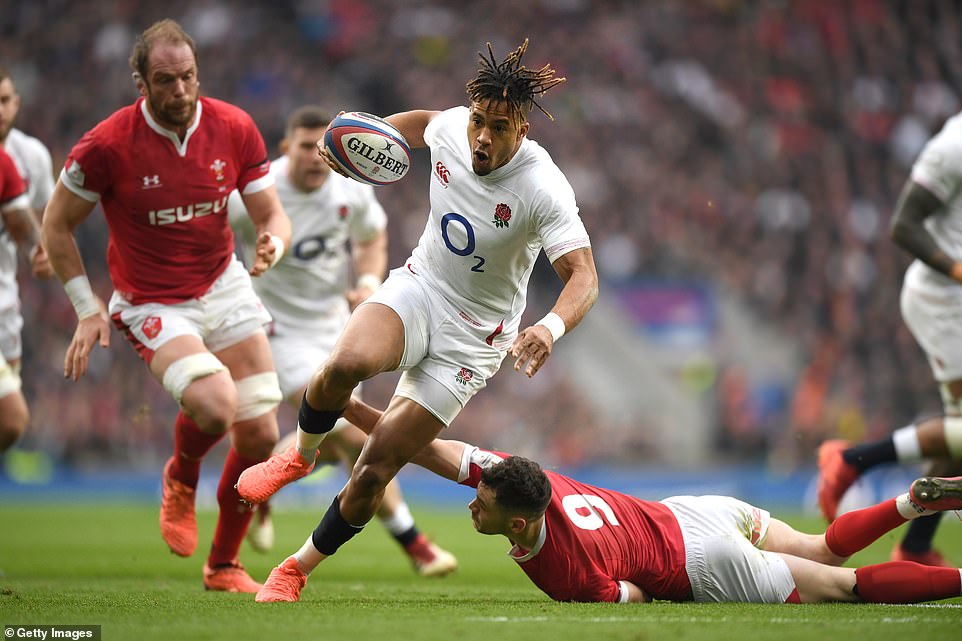 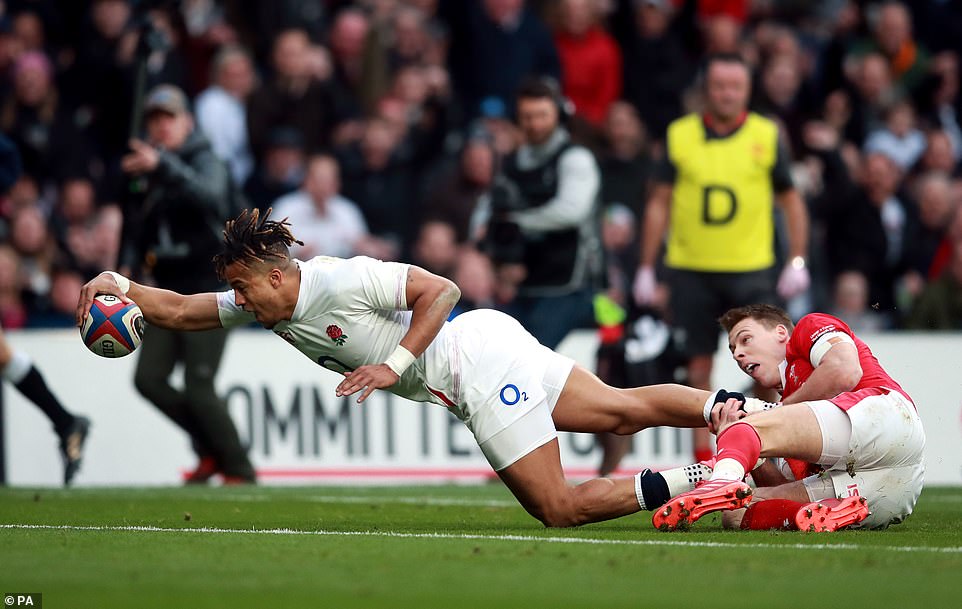 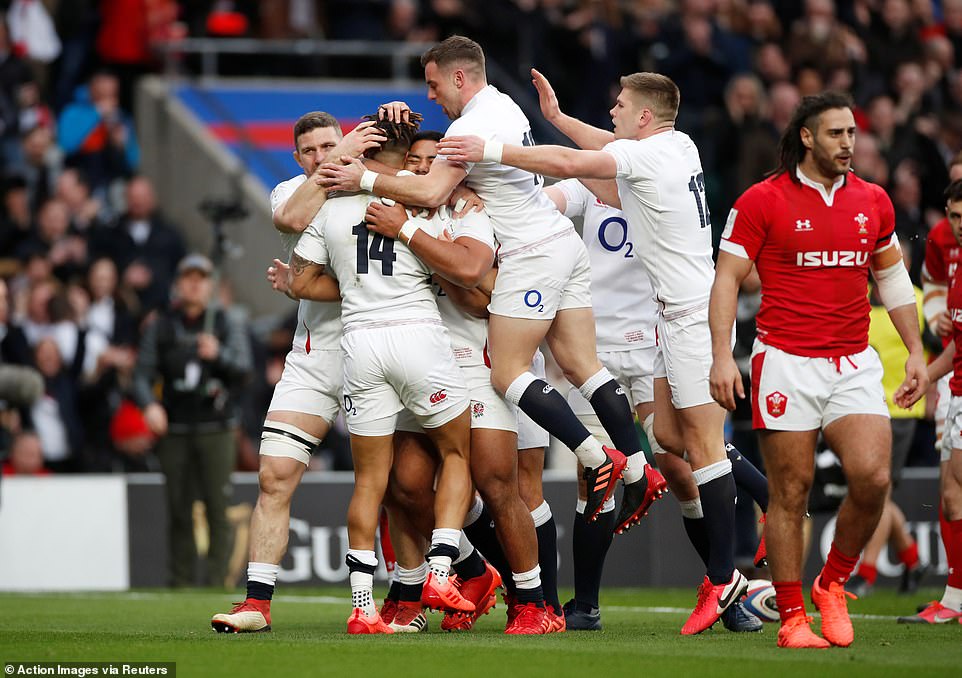 They have an 80 per cent win rate when they score inside the opening 10 minutes, so the odds were stacked in their favour when they broke through inside four minutes.

More Tuilagi pressure forced George North to knock on in midfield – before England gained territory through and attacking lineout. Mato Itoje claimed the ball and Ben Youngs drew the eyes of three defenders to create the hole for Anthony Watson to score.

Wales were overpowered from the start but English indiscipline allowed them to remain in the fight.

Skipper Owen Farrell risked losing the ear of referee Ben O’Keefe with constant protesting, with the No 12 conceding a handful of penalties. The snarling centre shoved North when he knocked on at England’s try line, which allowed Leigh Halfpenny to kick Wales’ opening points.

Joe Marler joined in with the wind-up tactics, grabbing Wales captain Alun-Wyn Jones by the genitals.

England were forced into an early change after Jonny May collided with Halfpenny, leaving Jones sweating over his decision to name just two backs on the bench. 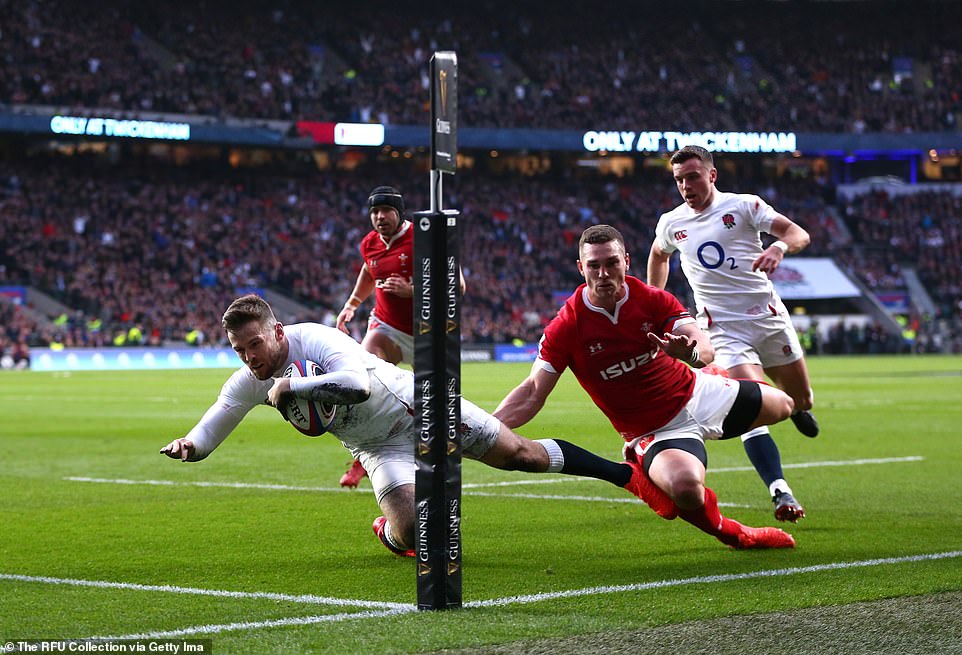 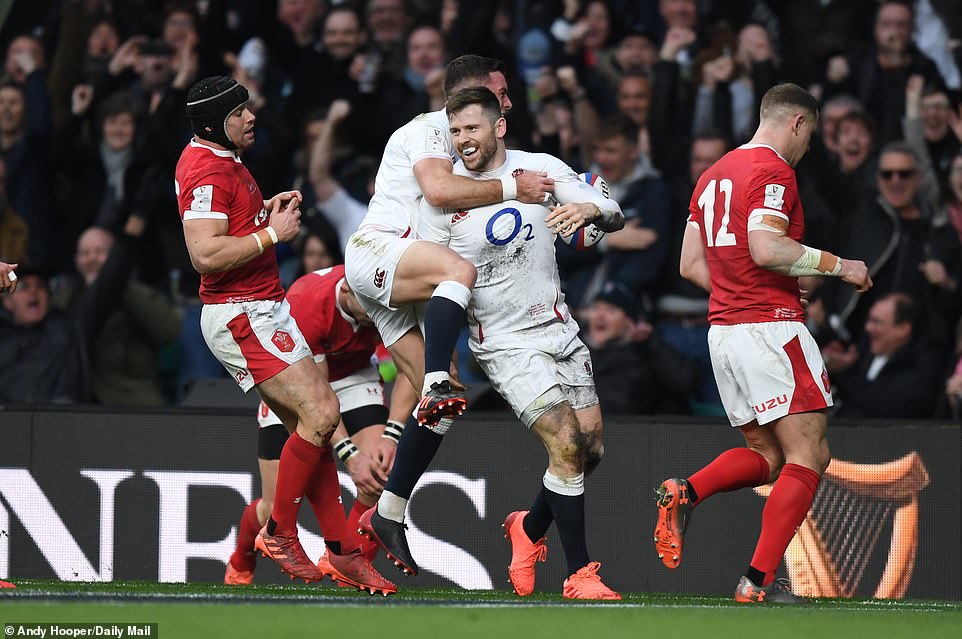 But the introduction of Henry Slade added an additional kicking option to England’s back-line and they repeatedly booted the ball into Welsh territory. And any attempts to run it back were met by crunching tackles.

Farrell and Halfpenny exchanged further penalties as both teams were guilty of indiscipline, but England found another key breakthrough.

With 34 minutes on the clock, Itoje claimed the lineout and England executed another strike move. Again, Youngs sniped, before slick hands by Farrell and Ford sent over Elliot Daly on the left wing.

With the campaign coming to an abrupt end, there were some impromptu farewells at Twickenham. Steve Borthwick has been Eddie Jones’ right-hand man since their days with Japan and his apprentice could be heading for foreign shores this summer. The pair bowed out with England’s line-out in good shape. 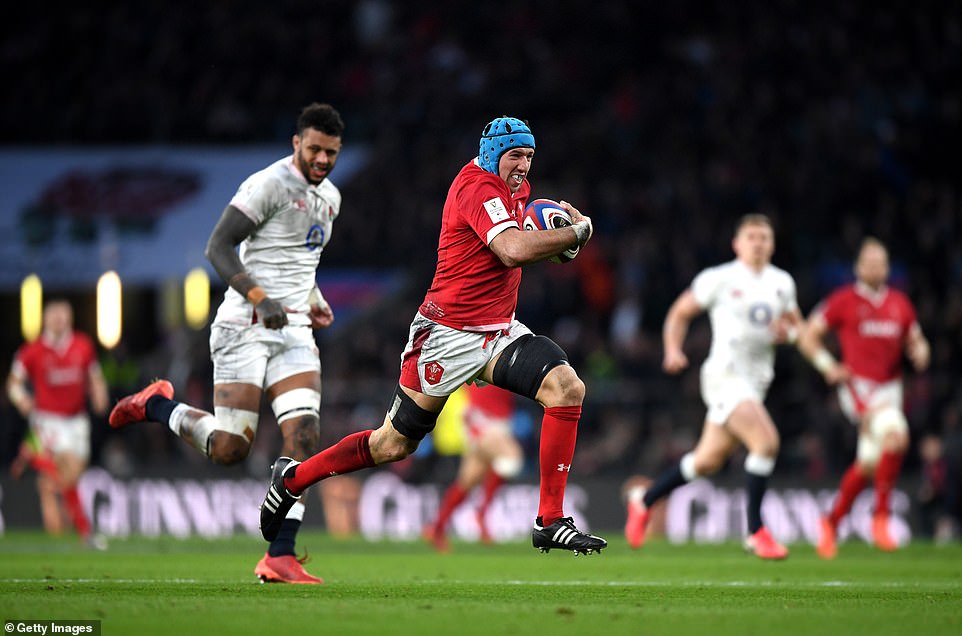 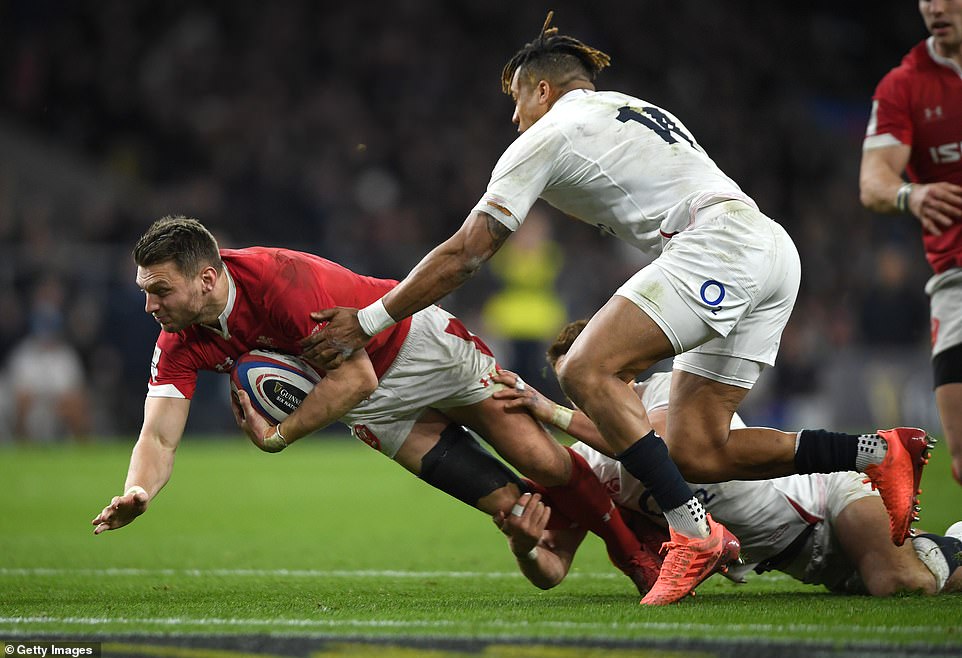 Daly’s try took England’s first half points tally to 20 points – for just the seventh time in 135 meetings – but Halfpenny registered another penalty just before the break.

With a stronger bench, England could have run away with the scoreline.

Questions have been asked about Wales’ resolve under Wayne Pivac. At times they have looked like a shadow of the Warren Gatland generation, but the visitors came out flying in the second half.

Straight from the kick-off, they scored one of the tries of the tournament.

Nick Tompkins claimed the restart, feeding Josh Navidi 85 metres away from England’s try line. The flanker passed by to Navidi who, via Tomos Williams, broke down field to set up Justin Tipuric for a spectacular score. 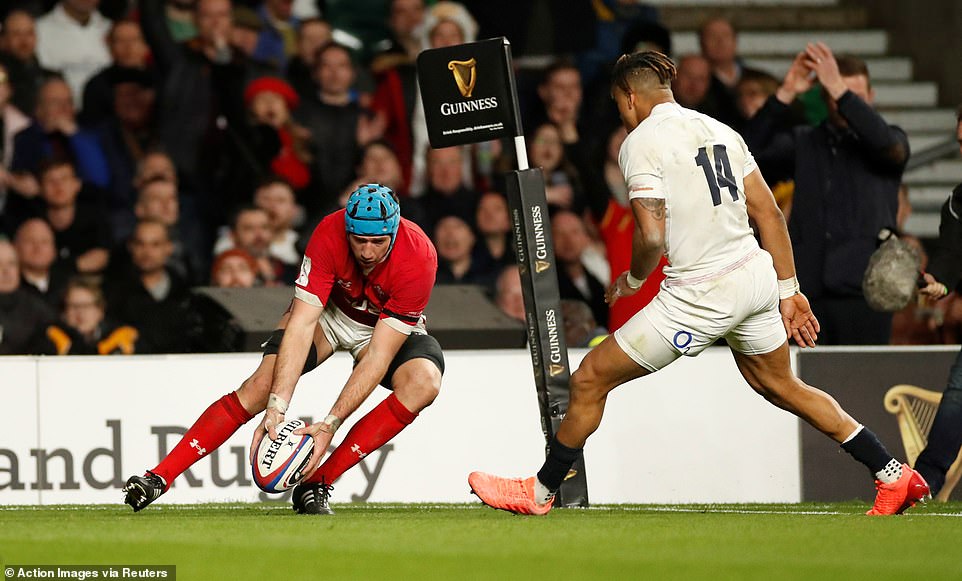 England were shell-shocked but their physical dominance – especially at the scrum – helped settle the nerves with two quick-fire penalties.

When Manu Tuilagi scored on the left wing to give England a 33-16 lead, the result seemed like it was cast in iron.

England sent on their replacements – Kruis appearing to wave farewell as he walked off – but Ellis Genge was sinbinned shortly after his introduction.

Tuilagi was shown a red card two minutes later, with five minutes remaining, and England were suddenly down to 13 men.

There was little time for a comeback but that did not stop the late Welsh charge.

Dan Biggar looped around Hadleigh Parkes to score in the 78th minute, and Tipuric grabbed his second in the closing play, but it was too little too late.