Sydney’s two draft selections from Western Australia Angus Sheldrick and Corey Warner will remain in Western Australia until January as will the Western Bulldogs’ Arthur Jones – one of three players from the state drafted to a Victorian club in the national draft.

However, the Blues will welcome small forward Jesse Motlop to the club early next week as the son of former player Daniel has been in Darwin with family ahead of the national draft.

Melbourne drafted three players from Western Australia with Judd McVee joining Jacob Van Rooyen and Taj Woewodin in the rookie draft. The club said they will spend the weekend working with the players to determine the preferred approach. 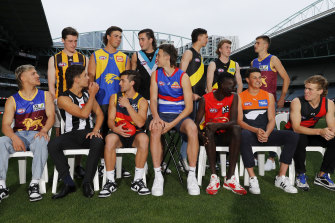 The Victorian-based first round draftees at Marvel Stadium on Thursday.Credit:AFL Photos

James Tunstill, who the Brisbane Lions selected, is likely to head to Brisbane next week with a club source saying they are in discussions with the family about what path to take.

If players in Western Australia headed east before Christmas they would need to spend 14 days in quarantine to head home for the break, so clubs have decided it is better for the players to remain in Perth where they are for the time being.

Warner’s brother, Chad, and Sydney’s first pick from last year’s draft, Logan McDonald, are also in Western Australia and the quartet will train with each other in the pre-Christmas period. Assistant coach Don Pyke was also in Perth when the national draft was held and has already caught up with Sheldrick.

The Eagles also expect Campbell Chesser will remain in Victoria at this stage after West Coast used their first pick (No.14) to select the dashing defender who grew up in Wodonga. They are waiting to see what happens with the border restrictions to determine exactly when Chesser relocates.

The WA premier Mark McGowan has declared that he is unlikely to relax restrictions until late January or early February so Chesser may have to spend 14 days in quarantine before joining his teammates.

Chesser was the only Victorian player selected by either Fremantle or West Coast in the national draft, with the clubs’ other eight selections all being local Western Australian products. However, the Dockers used their only selection in the rookie draft to add Oakleigh Chargers’ Karl Worner, who was overlooked in the 2020 draft.

Jones, a relative of the famous Krakouer family, played with Claremont in Western Australia and will be able to train in his home state before arriving at Whitten Oval in the new year.

The Giants’ pair Matt DeBoer and Bobby Hill are training in Western Australia for the remainder of 2021, and it’s expected that players from several clubs will do the same.