Melbourne Demons took a leap towards their first AFLW finals berth with a thumping win over West Coast Eagles at Casey Fields on Sunday.

The Demons kicked five goals in a storming third term as they ran away with a 59-point win, while 2017 Adelaide premiership forward Sarah Perkins made her debut for Melbourne as a short-term injury replacement. 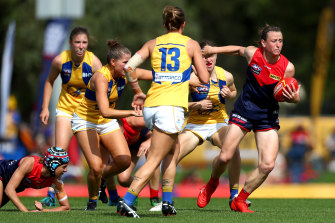 Harriet Cordner and the Demons had too much class for the Eagles at Casey Fields.Credit:Getty Images

The Demons' sturdy defence proved an obstacle for the first-year Eagles side, who are well-organised and have two elite players in Emma Swanson and Dana Hooker, but rarely pierced the home team's halfback line kicking just one goal via Maddy Collier in the second term.

Daisy Pearce, Libby Birch and Karen Paxman repeatedly cleaned up in defence and rebounded for the Demons, who had a host of winners around the ball and in the forward line with Elise O'Dea, Eden Zanker, Niamh McEvoy, Kate Hore and Shelly Scott among the most regular to win the ball or create a scoring opportunity.

After their upset loss to St Kilda in round three, the Demons need every win they can get while percentage could prove the difference with Fremantle, Carlton, Collingwood and the Demons all vying for three finals spots.

Sunday's win saw their percentage climb from 148 to 214 and a top-two place in the conference, while they still boast the tightest defence in the league with only 84 points conceded in five games.

O'Dea said her side knew their best football could take them great places.

"If we keep playing the football we are capable of, starting with our contest work then those results will come," O'Dea said.

"Birch coming across [this season], she is quite vocal and one part of setting up our defensive structure then having Daisy there as well [makes a difference]," Stinear said.

Perkins made her debut for the Demons after being promoted onto the list as a train-on player and had an immediate impact, pulling in an early mark and sending a stab pass into the hands of Zanker, who kicked the first goal.

Zanker left the field in the last term and had ice on her shin but the Demons said she would be fine for next week, while Lauren Pearce could return from a knee injury.

Perkins had some other nice touches too, including a mark and goal after the siren with her new teammates mobbing her.

Perkins was allowed to play as Melbourne only had 22 available players, but if others return next week she can't continue to play.

If Melbourne can retain the key forward, she could prove a handy addition alongside Tegan Cunningham, Kate Hore, Shelley Scott and Irish flyers Sinead Goldrick and McEvoy.

"We only had 22 so that meant Sarah was available this week, but we know Sarah is more than capable so it's a good position for us to be in," Stinear said.

"But she will be dictated to by other players."