Around the time the sun was setting on Hall of Famer Graham "Polly" Farmer's career in the west, a young medical student was just starting out with Uni Blues in the amateurs. Early one match he was knocked out, not coming to until quarter-time.

As Dr Peter Brukner tells it, not many noticed, because few blinked at concussion then – and because it was normal for him to have no presence in a game anyway. That at least would not change.

Brukner later was team doctor at Melbourne, Collingwood, Liverpool in England and for the Australian cricket team, and now is professor of sports science at Latrobe University. Asked this week in the wake of the Farmer CTE revelation if anything more could be done either to prevent or manage concussion, he replied: "No, to both."

Brukner stressed that he did not mean to minimise the problem. But he says the way footy is played has changed out of all recognition since Farmer's unruly heyday and the rugged later peaks of Brownlow medallists John Platten and Greg Williams, who hold growing fears for their own long-term health. Their experiences, though cruel for them, are not necessarily salutary. And change now won't help them then. 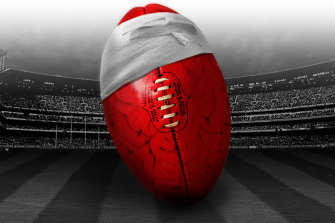 Separately, concussion protocols have been tightened drastically in the past 10 years, so that in the AFL this season a KO'd player will have to prove his fitness five days before the next game. Brukner said the regimen, though not perfect, was in line with world's best practice, as agreed between major sports and updated every three years. The next review is in Paris in November.

"If there was a simple scan that confirmed the presence of concussion, of course we'd do it,"  Brukner said. "The problem is that there isn't."

Lawyer, player agent and general bur-under-saddles Peter Jess is leading a class action against the AFL on behalf of Platten, Williams and others. He says the test used in the AFL, an elaborate questionnaire called SCAT5, is subjective and fallible.

Brukner agrees it is limited, but says at professional level it is not used in isolation. "It's a safety net," he said.

This is the nearest Jess and Brukner come to a meeting of minds. Jess says the AFL's research shows the brain is still dysfunctional four weeks after concussion, and other studies say it is vulnerable for up to six weeks, and if a player is hit again in that time the damage is likely to be three times as severe – with an increased risk of other, orthopaedic injuries, oddly enough – and it does not even have to be another hit to the head; a bump anywhere will trigger a reaction.

This, says Jess, explains former Collingwood and Brisbane defender Jack Frost, who retired two years ago after 56 games and 14 concussions, and St Kilda's 2014 No.1 draft pick Paddy McCartin, whose career is forever stalled.

Since the window is so wide, Jess' recommendation to the AFL is to adopt as a diagnostic tool one of three available scans, all more sophisticated, time-consuming and expensive than SCAT5, but more conclusive, too.

"I'm about safety," he said. "We now know concussion is not a transitory injury. It causes permanent long-term damage."

Nuances in this issue easily get lost; concussion has that effect. It is worth remembering, for those still with a memory, the baseline, to run our own SCAT5 test if you like.

One marker is how wild footy really was. In the 1980s, big hits – some of them king – were celebrated with their own video release, a best-seller. In the 1990 grand final, Collingwood's Gavin Brown played a crucial role while in la-la land. When the flag was won, Tony Shaw hoisted Brown onto his shoulders and exclaimed: "They can't knock out Brownie."

This century, Byron Pickett – a footballer good enough to have won a Norm Smith Medal – was more famous than infamous for a series of brutal shirt-fronts, catching unaware and defenceless victims who sometimes were blamed while Pickett was held in awe. To be clear, it wasn't just Pickett, it was footy. Some blanched, but few protested.

"When I started in footy," Brukner said, "we thought concussion was a fully reversible injury. There were no long-term consequences."

There was also a time when no one thought anything of driving while blind drunk or throwing burning cigarette butts out of car windows. Legislation and education woke us up. It woke up footy, too, and won't let it go back to sleep.

Collingwood's Scott Pendlebury for one says the worst of the machismo culture is dying. (Perversely, the roll call of prematurely retired players might affirm it; once, most would have persevered to their own ruin).

Others are not so sure. Some players downplay concussion still, because careers hang by threads. But, posthumously, Farmer is certainly concentrating minds.

There is another blurred distinction. In Farmer's wake, we're talking principally about CTE and concussion. In the US, the widespread understanding is that CTE is the result of repeated sub-concussive knocks to the head.

This is an occupational hazard in American football, with all its headlong rushes, where a lineman might cop 18,000 hits to the head in a 10-year career. It is plainly a health hazard in boxing; it was recently estimated that Muhammad Ali absorbed 200,000 punches in his time. "Punch drunk" is a sub-type of CTE with its own name, dementia pugilistica.

"We're not using the head as a weapon as they are in the NFL," Brukner noted. Hitherto, it has been footy's alibi and guarantee.

But one CTE diagnosis in Australian rules now acts like the single loaded chamber in Russian roulette, unnerving Platten, Williams, et al. Matthew Pavlich, multi-award-winning and severally concussed former president of the AFL Players Association, wonders now if he should have been more pro-active, for his own sake and others'. You could say it is doing their heads in again.

"We've had this crackdown for two or three years now on protecting the head," he said. "It's not working. If you're going to change behaviour, it has to be four to five weeks."

Williams got two. But lock-'em-up is always dubious policy.

Ex-Bulldog Liam Picken plumped for a concussion sub. "This would take the pressure off players, clubs and medical staff, and it would reduce the disadvantage to club if they lost a player through concussion," he said. Last year, after one concussion too many, the much-admired Picken was subbed out of footy permanently, so he deserves his say.

Helmets? Trialled, found ineffectual. In gridiron, they were found to make players more reckless, not less.

Even stricter protocols? Dr Peter Larkins, another vastly experienced sports medicine practitioner, wonders about practicability. "If every possible or suspected head knock requires a player to be removed from play, clubs and coaches need to buy in," he said. "Will they?"

He prescribes greater sophistication concerning time out. "(There's) no logic to setting an arbitrary number," he said. "(It's) more sensible to individualise player recovery and response. Number of games missed is highly variable – from zero to permanent."

As for the minimum break, the once-statutory seven days was only ever a matter of convenience rather than science anyway, the typical time between games in most sports. It is bound to be increased.

Modified junior rules? That much is certain. It is happening already in other sports.

Jess' answers are twofold. One is better record keeping, to counter what he suspects is official fudging. The other is new-old.

"The game has morphed into a permanent scrum," he said, "and most of the damage is done in this area."

Ruckmen cop it worst, then in-and-unders. So, yes, Jess proselytises for congestion-busting zones, not just at stoppages, but throughout.

It's most unlikely to happen anyway, because philosophically it's a step on to road to non-contact, ultimately taming the game's primal, animating force. No one wants to or will go there.

American author Malcolm Gladwell summed it up melodramatically when CTE first entered that country's consciousness. "There is nothing to be done, not so long as the fans stand and cheer," he wrote. "We are in love with football players, with their courage and grit, and nothing else – neither considerations of science nor those of morality – can compete with the destructive power of that love." It resonates here now.

So, management of the unmanageable it is. Brukner bristles at the idea of a cabal of doctors working for clubs and against players. "As a team doctor, (concussion) is the thing that keeps you awake at night," he said. "It's tough. Sometimes, they seem fine for the first hour or two. Then the next day …"

No longer in clubland, the offence he takes is on behalf of a profession, not a system. "We've come a long way in the last few years, we're taking a much more conservative approach," he said. "But it's not perfect, and we've got to get better, I agree."