Peter V’landys insists the NRL only has “two to three” days to decide where this year’s grand final will be played and took a massive swipe at the soon-to-be-opened Allianz Stadium in his latest scathing attack on NSW Premier Dominic Perrottet.

The Australian Rugby League Commission boss revealed the NRL will be forced to make a decision on where this year’s showpiece game is played by the end of the week after he alleged the NSW government withdrew from a commitment to upgrade Sydney’s suburban stadia.

In an extraordinary press conference where he said a handshake with Perrottet was worth “not much at the moment”, V’landys hinted the NRL had entertained the idea of keeping the grand final at Accor Stadium in Sydney to honour their part of the deal.

“We’re going to look at all options and one of the options is for us to stay in Sydney for us to honour our agreement – and we expect them to honour their [agreement],” V’landys said. “That decision will be made in the next two to three days.

“One of the disappointing aspects is we’ve trusted them for the last three months and we kept getting told, ‘there is this happening and that happening. Can you wait for the announcement to happen at a different period?’ Now it’s given us limited opportunity given we’re weeks away from the grand final.

“This was the fifth excuse they’ve given us as to why they’re not honouring the agreement. To use the human tragedy of the floods to weasel and spin your way out of a commitment takes it to another level. It’s complete spin.”

The Queensland government is on notice for Suncorp Stadium to host the decider for the second straight year. The venue was used for Penrith’s grand final win over South Sydney after the NRL relocated its competition to Queensland due to COVID-19 border closures.

V’landys was speaking at the unveiling of a suite of prizemoney increases for thoroughbred races in NSW, before quickly turning the blowtorch back on the NSW government.

The NRL believed they had an understanding with Perrottet for suburban stadiums at Brookvale, Cronulla and Leichhardt to be upgraded in response to the government scrapping an $800 million redevelopment of Accor Stadium, the country’s largest rectangular sporting venue. 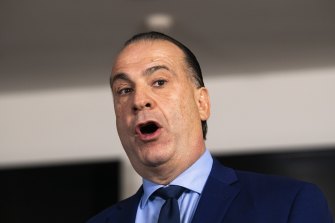 He even took a swipe at the usefulness of the new Sydney Football Stadium, which is due to open next month when the Roosters and Rabbitohs play in the final round of the NRL’s regular season. He described the $800 million build as “unnecessary”.

“They could have used that $1 billion and built suburban stadiums elsewhere. We want the money invested in suburban areas where they’re multi-purpose facilities.”

Asked about his grand final threat, V’landys said: “One thing you’ll learn from me, I don’t bluff.”