Check back for more updates throughout the day.

Collingwood captain Steph Chiocci says Richmond and the AFL have made the wrong call in hosting Saturday’s AFLW semi-final at Punt Road, declaring it is a wasted opportunity to promote the league.

The Tigers’ decision to retain their home-ground advantage and host North Melbourne at the Swinburne Centre has sparked criticism, given the venue can only accommodate about 2500 fans. Tickets sold within 13 minutes of going on sale on Monday.

The timing of the 1.40pm game has also been criticised, as the match clashes with the Matildas’ game against Sweden at the nearby AAMI Park, beginning at 2.45pm. It’s the Matildas’ first game in Melbourne since 2019. 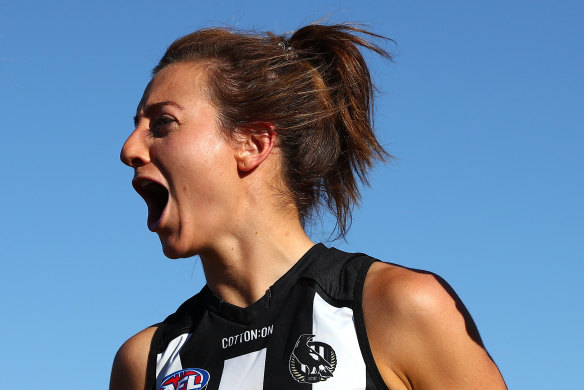 Tigers chief executive Brendon Gale insists his club earned the right to host the final at its venue of choice, that being Punt Road, but Chiocci, one of the sport’s most respected figures, says the game should have been held at Carlton’s Ikon Park, where thousands of more supporters could have attended.

“What would I want as a Collingwood captain for somewhat of a home-ground advantage … personally, I would want to play the game on the best available ground with the biggest crowd available to us,” Chiocci said on RSN radio.

“It’s bigger than me, it’s bigger than the game itself, it’s about promoting women’s footy and putting on a show. That’s the way I look at it. I would probably be pushing for Ikon Park, it’s the best (venue) in Victoria … it’s wonderful facilities, it can cater for thousands of people. Why not put us on the biggest stage that you can?”

The Tigers have previously moved games to accommodate bigger crowds, twice doing so in 2020.

The Adelaide-Collingwood semi-final at Unley Oval is also being played on Saturday, beginning at 3.40pm. This contest also had to be held during the day because of a lack of broadcast-quality lighting.

In a statement, the AFL said: “Richmond earned the right to host the semi-final and indicated a very strong preference to play on their home deck at Punt Road – which we know will have a great atmosphere come 1.40pm Saturday.

“When scheduling finals matches, the AFL takes into consideration [a] number of factors including the home team venue preference, days breaks for clubs (both the week before and the following week), timings for fans, clubs and broadcast, and forecasted crowd/venue capacity.”

Meanwhile, Fremantle is on the hunt for a new senior coach after parting ways with Trent Cooper. The Dockers had only three wins and a draw this season, missing the finals. Cooper had been with the club for five years.

Carlton midfielders George Hewett and Matt Kennedy are on the mend from injury and lifting their training loads, as the Blues prepare for an arduous pre-season they hope will finally help to end their finals curse.

Inside midfielder Hewett and fellow tough nut Kennedy enjoyed strong 2022 seasons and were key figures in the Blues remaining in the top eight for 21 rounds of the home-and-away season before crashing out and missing the finals with defeat in the final game against Collingwood.

Hewett, having crossed from the Swans, averaged almost 29 disposals in his 15 games, but did not play after round 18 when a back issue flared up and he required surgery. The Blues won only one of the five games he missed from that point. 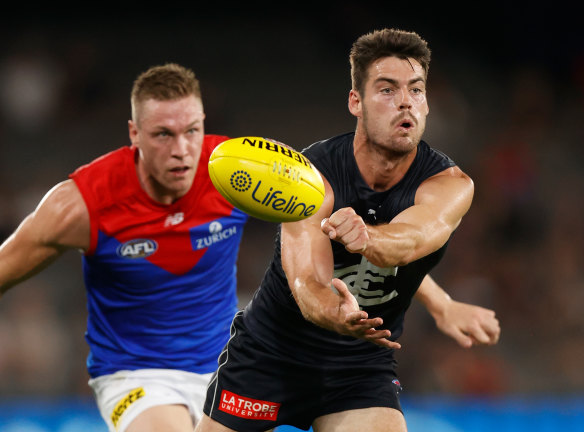 George Hewett is on the mend after back surgery, and will be pivotal to the Blues’ 2023 fortunes.Credit:Getty Images

“George is back running and completing light football skills after back surgery. He is on track,” he said.

Kennedy had a career resurgence, averaging almost 25 disposals in his 17 games, but did not return after the round 20 clash against Adelaide when he suffered a fractured jaw and concussion. The Blues revealed the following day that he also had a Lisfranc injury to his foot and would miss the rest of the season.

Lloyd said Kennedy was making good progress, with the Blues looking to ease him into the pre-season.

“Matthew’s Lisfranc surgery was a success. He recently started running and is coping well with the loads,” he said.

Ruckman Marc Pittonet is also on the comeback trail, having had PCL surgery, but he may have a delayed start to the official pre-season. The tough-as-teak frontline big man had an injury-hit year, having initially been hurt against Fremantle in round six. He returned in round 20 and played three of the final four senior games.

“Marc is progressing well following a PCL reconstruction. He has met all milestones to date and will begin running in a few weeks. He is on track to be available for the start of the season,” Lloyd said.

Forward Corey Durdin has had a shoulder reconstruction but will be able to join in running programs when training begins.

Skipper Patrick Cripps, yet to play in the finals after nine seasons, is eying another strong summer, his flawless pre-season last year providing the springboard for him winning football’s highest individual honour – the Brownlow Medal.

Cripps has returned from the US, where he spent time with NBA and NFL franchises, and met world renowned sports psychologist Dr. Michael Gervais.

The Blues’ first to four-years players resume on November 21, with the rest officially back on December 5.