‘Clint deserves to lift that trophy’: Price hopes 34-year wait is over

Parramatta skipper Clint Gutherson finds it impossible to avoid the old footage of Ray Price and Mick Cronin lifting the premiership trophy in 1986.

"You see it everywhere, and the fans are always reminding you of it," Gutherson says. "That's motivation for me. It would be the best ever to do it. I'll be working hard to get there." 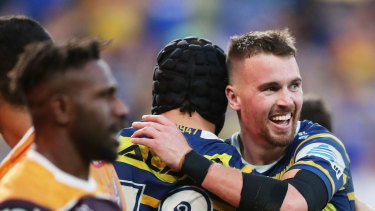 It's been a long time between drinks for the Eels, so Price and Cronin hope Gutherson is standing there on the first Sunday of October, too.

The man known as "Mr Perpetual Motion" has often said his beloved blue and golds should have won at least five premierships since.

"In the 34 years since we won the premiership, they should have five to 10 grand finals," Price says. "I really believe that. But they haven't.

"They've had a number of great players over the years, but they haven't been able to win a title.

"Clint deserves to lift that trophy because he's been playing so well. I'm a big fan of his. He plays well and he leads well. I like the fact he just gets in and does it.

"They were going to get rid of him, weren't they?

"They've made some good buys this year. I've always hoped Parramatta will win another grand final because, geez, you'd hate to be the last one to win it."

Cronin has lost count of the number of times he's stood behind the bar at his pub in Gerringong and been asked about Parramatta's hopes.

"I'm asked every time a fan walks in,'' Cronin says.

"Some days you'll get asked five or six times. It's like they think I'm some expert and they're looking for those magic words.

"Nothing I say will make a difference, but you try to keep their spirits high.

"If they improve on what they did last year they will be a chance.

"And if we're talking about Clint Gutherson, he won't be the reason they don't win the comp.

"He's a guy who gives 100 per cent every week. I remember not last year but the year before and he was the one bloke who looked like he was really hurting after every loss.''

Price and Cronin were part of the all-conquering Eels in the 1980s that featured household names such as Peter Sterling, Brett Kenny, Eric Grothe and Steve Ella. They were the last team to win three titles in a row, from 1981 to 1983, a remarkable feat the Sydney Roosters will try to match this year.

The Eels' class of 2020 has been boosted by the arrival of representative forwards Reagan Campbell-Gillard and Ryan Matterson. The club is being talked up as a top-four hope. They may never get a better chance to end what is now a 34-year drought.

Fans will get a quick idea if Parramatta mean business when they host bitter rivals Canterbury at a packed Bankwest Stadium on Thursday night. There will be 30,000 fans there.

At the helm of the giant western Sydney club is a young skipper who is still trying to work out "when to be one of the boys and when to lead".

Like most 25-year-olds, Gutherson still enjoys a good time.

For instance, after a few cold ones at lunch time on New Year's Eve, he thought he'd bleach his hair for a laugh. Hardly something you would have expected Price to do back in the day.

"I was sitting by the pool and thought, 'why not?', as you do after a few beers," Gutherson says. "My partner's sister did it for me. Then it started growing back. I looked bad so I got rid of it."

Gutherson is a popular figure in the game, highlighted by the fact some of his old Manly mates pushed hard to get him back to his junior club, and the area he still resides, despite entering a fifth season in suburbia.

It is easy to forget it was only 12 months ago senior Sea Eagles wanted Gutherson back in the halves alongside Daly Cherry-Evans or out in the centres.

"There was always the temptation to go home and play with blokes I grew up with," he says. "But I'm so happy I stayed here. This has been home the last five years. I have another three years here, and hopefully more."

Gutherson was 18th man for the NSW Origin team in games two and three last year and was then rewarded with selection in the Prime Minister's XIII team, followed by the World Cup Nines, and included in the extended Kangaroos' squad for the New Zealand and Tonga Tests.

The biggest lesson he learnt last year was through the time he spend with captain Boyd Cordner for his state and country, and how he could improve his own leadership skills.

"With those rep teams you see how committed everyone is and how they handle the big games," he says. "When you're not at training they're relaxed and have fun, but when you're on the training paddock they're balls out and ready to go.

"Over the Origin period and even with the Aussie side, I learned plenty from 'Boydo', just the way he goes about his business and talks to the team. Every time he talks everyone's eyes would come up, and as a young captain of Parra, that's what I want, to have everyone's attention when I talk.

A Blues jersey is on Gutherson's to-do list. So is the 2021 World Cup. They are more than realistic goals.

Fittler likes Gutherson and told The Sun-Herald: "I've never seen him not be 100 per cent. Whether you're getting on a bus or going to a function or going to training, he gives everything. I love it the way he does it. It's only a matter of time for him."

Gutherson could not be happier with team's preparation this summer. He was happy enough with the two trials, and stressed the importance of getting off to a good start in four sleeps time.

Could it be the year of the Eel? Gutho hopes so. Price and Cronin have been hoping 34 years.