Carlton are spending 105 per cent of the salary cap in 2020, using the AFL’s ‘‘banking’’ system to maximise player payments and leave themselves room to recruit seasoned players for next year and beyond.

The Blues have taken advantage of the rule that allows clubs to spend over the salary cap by up to five per cent, if they have underspent on players in the two previous seasons and have room to trade in more players this October.

The Blues have some contracts front-ended — with heavy payments upfront — that will give them space for another aggressive post-season, despite spending 105 per cent of the limit, as the AFL rules allow via ‘‘banking’’ from 2018 and 2019 when they spent below the salary cap. 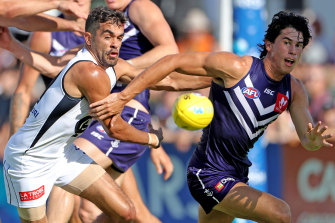 Gold Coast recruit Jack Martin, who is contracted on close to $1 million this year and nearly $2 million over the first two seasons, is on a heavily front-ended deal (a total of about $3.1 million plus incentives over five years) that was designed to fend off the likes of Melbourne in the pre-season draft. The Martin deal, clearly, has been enabled by Carlton’s additional five per cent.

The Blues had sufficient room to pursue Sydney’s Tom Papley and Giant Stephen Coniglio, plus Martin, though it is unclear whether they would have room for all three had Coniglio chosen Carlton rather than sticking with the Giants.

Skipper Patrick Cripps, one of the game’s elite players, was not paid more than $1 million in 2019, and has a further two years to run on his contract including this season.

The Brisbane Lions used the banking system to pay 102 to 103 per cent of the salary cap in 2019, when they had imported Lachie Neale from Fremantle.

Under the rules, a team that doesn’t spend the space saved from the two previous seasons loses that opportunity if the extra money isn’t spent in the third year.

The system favours clubs that have younger lists and lower player payments. Many powerful clubs — West Coast, Collingwood, Hawthorn, Essendon, Adelaide and Geelong — have never been in a position to bank salary cap money.

Carlton says their vastly improved financial position has made it easier for the club to pay the additional salary cap.

In other developments at Carlton, some of which were outlined to members yesterday by chief executive Cain Liddle:

■ The Blues have increased their revenue by about $10 million since 2018, a lift due to increases in membership (a record set of more than 64,000 in 2020 already), sponsorship, crowds and non-football income.

The membership target is 75,000 this year, as Liddle told the members that their financial recovery was ‘‘almost entirely led by our members’’ rather than by AFL assistance or wealthy backers. The Blues have often leaned on wealthy families and individuals for support, such as the Pratt and Mathieson families, although the club still netted about $2 million from poker machine revenues at their four Mathieson-aligned venues in 2019.

■ Carlton made close to $500,000 from their ‘‘Carlton College’’ joint venture with Latrobe University, which sees students enrolling in courses relating to sport.

■ The club paid off $3.4 million of their long-standing debt in 2019 and has told members they are ‘‘on track’’ to eliminate debts completely in the next 18 months. Carlton has not been debt-free since 1996.

■ The AFL has reduced the distribution to the club for 2020, on the back of their improved finances.

■ The club is spending to the maximum of the soft cap on football department spending.

■ The Blues say that their business network is ‘‘the biggest in Australian sport’’ of any club, evident in their ‘‘Carlton in Business’’ function in grand final week that drew 1400 people.