Two young guns have staked strong claims for Tim Taranto's spot in the Greater Western Sydney midfield, but Coleman medallist Jeremy Cameron could be at risk of missing their season-opener due to suspension.

The Giants ran out 14-point winners over Richmond in Sunday's Marsh Series clash in Wagga Wagga, their final competitive outing before a round-one meeting with Geelong at home in a fortnight. 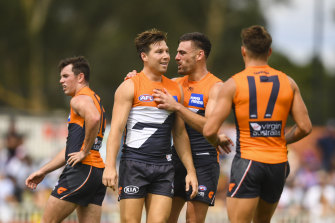 Toby Greene celebrates with Giants captain Stephen Coniglio after scoring one of his five goals against Richmond on Sunday.Credit:AAP

But the real intrigue lies in GWS's next rung of players, where there is hot competition to join a star-studded midfield against the Cats.

With 29 possessions, Jackson Hately might have put his nose in front for the position vacated by Taranto, who picked up a shoulder injury last weekend.

But prized academy product Tom Green also did his chances no harm with some brilliant moments, collecting 16 touches and kicking a goal while rotating through the midfield.

"We wanted to get a lot of game time into them and see how they stood up against [Richmond] who are clearly an outstanding unit. We were really rapt with how they performed."

Meanwhile, the Giants will be anxiously awaiting the charge sheet of AFL match review officer Michael Christian after a potentially troublesome incident early in the second quarter involving Cameron.

The club's leading goalkicker collected Richmond's Kane Lambert high with his knees after chasing him towards the boundary and then landing on him. Lambert took no further part in the match due to concussion, and while it looked like accidental contact, it was clumsy and will no doubt be scrutinised.

This was the first time the Giants and Tigers have met since last year’s grand final blowout – not that it would have been on the minds of either team, whose chief aims were to simply tick the necessary boxes in the countdown to round one. The 17.7 (109) to 14.11 (95) scoreboard suggests only the winning team would walk away content, but both sides got what they wanted.

Sunday's clash was a teaser. The low-stakes nature of the match turned it into a more free-flowing shootout as opposed to the tense arm wrestle that probably awaits in round 7, when the real grand final rematch unfolds at the MCG and the shackles are taken off.

For the Tigers, the clear highlight came just a few minutes before half-time, when Sydney Stack spent what felt like an eternity hanging on the shoulders of Greene to take a spectacular grab.

Unfortunately for Stack, it won't qualify for the AFL mark of the year award, but it's tough to imagine many better will be seen this season.

"They're tough to play against. It's going to be a good year once again for them. I think they'll be thereabouts," Tigers coach Damien Hardwick said of the Giants. "We're playing some reasonably solid footy without being at our very best, but we know the hard work's in front of us still to come."

Richmond's main ball-winners were Dustin Martin (24 possessions) and Jason Castagna (20 possessions), who both kicked two goals apiece, while the player at the centre of last year's September fairytale, Marlion Pickett, chipped in with 20 touches.